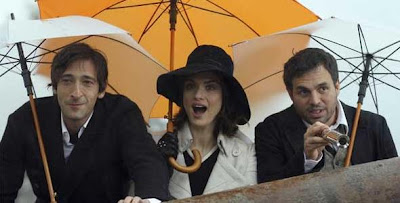 The Brothers Bloom, Rian Johnson’s follow-up to 2005’s Brick, is kind of a difficult film to assess because it is equal parts enjoyable and frustratingly over-plotted. It’s like a sketch on Saturday Night Live that’s really good and funny but then just doesn’t how or when to stop and so fizzles itself out. That being said, while its weaknesses keep it from being a really great movie, its strengths are enough to qualify it as a good movie. Besides, anything that starts with a voice-over by Ricky Jay can’t be all bad.

The Brothers Bloom, so named for reasons that escape me since Bloom doesn’t seem to be their surname but rather the name of the younger brother, are orphans who spend their childhood shuffled from one foster family to another and pull cons in the various small towns they find themselves in. As adults they are played by Mark Ruffalo and Adrien Brody, who don’t particularly look like they could be brothers but have a believable sibling rapport nevertheless. Stephen (Ruffalo) is the mastermind and his cons seem to be less about swindling money than about trying to make Bloom (Brody) happy. But Bloom is not happy and wants to escape the con artist life, prompting Stephen to come up with a plan for one last big score to end their career.

The plot involves Penelope Stamp (Rachel Weisz), a wealthy eccentric whose entire childhood was spent inside her family’s cavernous mansion and whose social skills are, as a result, somewhat lacking. Bloom charms her (and is, of course, charmed by her) and entices her to join him, Stephen, and Bang Bang (Rinko Kikuchi) on a journey to Greece by boat, which then turns into a journey by train to Prague in a fake plot to get a rare book through the mysterious Belgian (Robbie Coltrane). The fake plot is funded by Penelope, whose money disappears with the Belgian, all according to Stephen’s plan. What Stephen didn’t count on was that after losing the money, Penelope would still want to get the book because she’s just so caught up in the idea of being a smuggler. I’ll leave the description of the plot at that since there are so many twists and turns that come afterwards.

While watching the film, I couldn’t help but think to myself that if this were a TV show, I’d watch it every week because I just like the characters so much. Stephen and Bloom, despite their occupation, are nice enough guys, Bloom as the sensitive and vulnerable one who ultimately just follows along with whatever his brother wants, and Stephen as the protective older brother whose real goal is to make Bloom happy. Although their plots involve vast sums of cash, Stephen seems less interested in the money than in the mechanics of plotting to get it and in creating the story that acts as the set-up, which I suppose shouldn’t be a surprise given that the brothers are named for characters created by James Joyce (Stephen Dadalus in A Portrait of the Artist as a Young Man and Leopold Bloom in Ulysses). Another literary reference is made later when Penelope points out, after learning that the Belgian’s name is Melville, that their boat is called Fidele, the same as the boat in Herman Melville’s The Confidence Man. I like that moment a lot because it shows that a) Penelope isn’t an idiot despite the fact that she’s the mark, and b) Stephen is sometimes too clever for his own good.

Weisz for me is the standout of the actors as she manages to make Penelope more than just the sum of her eccentricities. I’m firmly of the belief that she knew all along that she was being scammed but went anyway because it seemed like fun and, besides, she could lose a few million without ever missing it. Her rapport with Bloom, Stephen, and especially Bang Bang – who is silent save for three words and a karaoke performance near the end – is delightful, perhaps because her own enthusiasm is contagious. She allows Penelope to be intensely vulnerable but still quite strong – stronger, certainly, than the brothers suspected.

As for the film’s weaknesses, it’s all in the way that Johnson over-stacks the deck in terms of plot. He introduces so many threads that in tying them up at the end he creates a conclusion that is less than satisfactory and also exhausts your patience as a viewer. I really, deeply dislike the ending of this film, though I found it to be enjoyable enough for the most part to recommend it.

I hated this movie so much! I just couldnt "get it" it gets damn near incomprehensible very early on!

Gave up on it half way through.

Hate to disagree, Connoisseur, but I absolutely LOVED everything about "Brothers Bloom," from the convoluted, twisty plot to the love story between Brody and Weisz to Ruffalo's final scenes. Maybe Rian Johnson tries too hard and aims too high, but overall he's created a fun, smart and rich caper movie.

I liked the characters more than the plot, but I have to agree with M. Carter that overall I thought it was a lot of fun.

Your first paragraph nails Brothers Bloom. It just didn't know when to stop. I remember being satisfied by what I thought was the ending only to discover we had one more twenty-minute turn to endure. Ugh. If not for that, it would've been a great film.

@ Reel Whore: Exactly - it comes to what should be its natural end and then it just keeps going.

Hey, I used part of your review in my Movie Menage post. Check it out:
http://reelwhore.blogspot.com/2009/11/movie-menage-brothers-bloom.html