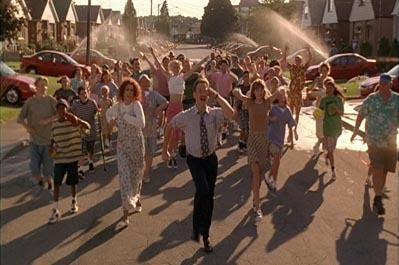 What works as a 2 minutes sketch doesn’t always translate effectively to a 2 hour film – just look at the number of failed films based on Saturday Night Live characters. The primary reason for this is that sketch characters, by their very nature, are quite thinly conceived, often designed around a single joke. If you’re going to give that character somewhere in the area of 118 more minutes of screen time, you’re either going to have to give him or her dimension or you’re simply going to have to repeat the same joke over and over. Most sketch to film adaptations seem to choose the latter, which is a losing proposition. Brain Candy goes a different route entirely, which is probably why it mostly succeeds as a film.

Instead of centering the film on one of their recurring characters, The Kids in the Hall spread the story out amongst various newly created oddballs (with a few cameos from old familiars thrown in for good measure) in a setting that fits them. In many films of this nature, the characters will be found in a version of reality that, while fake, is supposed to resemble our own; Brain Candy, rather than transplanting characters, transplants the insane, exaggerated universe of The Kids in the Hall show. In the film, a team of scientists labors at creating a drug to cure depression. Though it’s still in the early stages, the team’s leader (Kevin McDonald) declares the drug ready to go on the market in order to avoid having the project shut down completely by the company’s impatient CEO (Mark McKinney), a barely concealed parody of SNL and Kids producer Lorne Michaels.

When taken, the drug unlocks a patient’s happiest memory and sends them into a state of euphoria. This is wonderful and the drug sells through the roof, becoming the top selling pharmaceutical in the world. There’s just one problem: after the pill is on the market, the scientists discover that one of the side effects is that patients eventually get trapped in their happiest memory, putting them in a comatose state. Of course, as far as the people making money are concerned, this is hardly a problem at all and rather than pulling the drug, they find a way to spin the side effect to their advantage.

This is, of course, a very silly movie, although when you consider the ubiquity of drug advertisements these days, it also seems somewhat prescient. I swear to God I once saw an ad for an anti-depressant which listed “depression” as a side effect – people, we are living in The Kids in the Hall universe! The film is parody, but aspects to it seem weirdly (and frighteningly) realistic, particularly the drug company’s make money at any cost ethos.

I totally agree- the Kids really knew how to adapt their sketch comedy into a full-length feature. I love this movie, but it's always a little bittersweet when I think about the quarrels happening offscreen, especially given Dave Foley's obviously lessened screen time as he was moving to Newsradio.

He does have one of my favorite KITH moments here though: "So I hear dad's dead. Hey, is that eggnog?!"

Yeah, the near absence of Foley is kind of glaring. But I say that as someone whose favourite of the Kids is Foley.

haha he's my favorite too, so it feels like a personal affront that he's not in it enough.