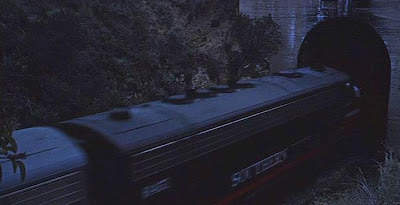 Year: 1959
Director: Alfred Hitchcock
Great Because...: It is so deliciously and unapologetically Freudian. Lots of movies end with a kiss and a fade to black, leaving the rest to your imagination. This film ends with a kiss between the now Mr. & Mrs. Thornhill, who lean back on their bunk and then... cut to a train going into a tunnel. Well played, Mr. Hitchcock.

In the short amount of time that Roger Thornhill and Eve Kendall have known each other, they've been through an awful lot. She enters his life first as a supposed ally, only to be exposed later as a betrayer. He denounces her and then realizes that maybe she's not so bad after all. Of course, by then the real bad guys also realize that maybe their pawn isn't so bad after all, making it necessary for Thornhill to try to save the woman who was once in league against him. It all culminates in a fight atop Mount Rushmore, where all that separates Eve from a long fall to her death is Roger's grip on her hand. He starts to pull her up and then...

Pulls her up on to the bunk of their train compartment. Who but Hitchcock would decide that the perfect moment to cut away is when the hero is saving the girl? Who but Hitchcock would take us right to the edge of what should be the big moment, when Thornhill will pull Eve to safety (off the face of a monument, no less), and then yank it away and get away with it? There's no heroic stance, no grateful embrace, no lingering shot of the two standing victorious on top of a former President's head and it doesn't even matter because what we end up with is so much better.

Such a quick shift in tone isn't easy to pull off. You cheat the audience's expectations by doing something like this and run the risk that they'll resent you for it. So why does it work here? Maybe because there's a randy undercurrent to much of the film (see, for example, Thornhill's appraisal that Eve is a big girl "in all the right places") that this ending just seems to fit. It also manages the rare feat of being very wink-wink-nudge-nudge obvious without losing any of the idea's cleverness. It's the kind of ending that is rife for parody but nevertheless still brilliant in its original context.

The first time I saw this I had a rather similar reaction of "Oh wait, what? oooo well played." Such a good ending.

Absolutely! You're right: "what we end up with is so much better."

It's hard convincing my students of that sometimes though. =)