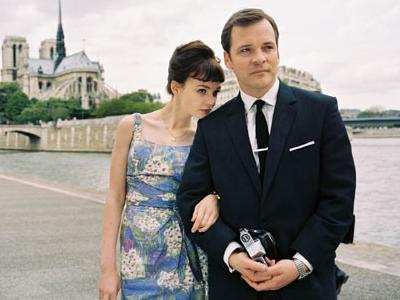 There’s more than one way to get an education – the formal, institutionalized way that will prepare you for the workforce, and the unofficial, haphazard way that will prepare you for life. Neither is simple as Jenny, the clever, spirited heroine of An Education, can attest. In that role Carey Mulligan shines, a total natural as she navigates Jenny’s journey through the perilous final stages of the transition from child to adult. “I feel very old,” she says towards the end, “but not very wise.” I think she’s giving herself far too little credit.

The film takes place in the 1960s and opens at an all girls’ school where posture is a part of the curriculum right along with cooking and the lesser subjects of English and Math. It is hoped by Jenny and her parents that getting good grades at such a prestigious school will help her get into Oxford. For similar reasons she has learned to play the cello, hoping to impress the admissions people with such a refined hobby. The importance of creating this image is stressed by Jenny’s father (Alfred Molina), who believes that it’s important to put on a show but doesn’t believe that the value of what Jenny is learning is the knowledge itself. Knowledge itself is secondary, which is why she has to be able to say that she can play the cello but she’s not actually allowed to practice it because the important part (learning to play) is over.

Waiting at a bus stop in the rain with her cello she meets David (Peter Sarsgaard), who charms her into letting him give her a ride home. It isn’t difficult for him to impress her because not only does he have a nice car and know about all the beautiful things that Jenny wants to know about (art, music, good food, etc.), but he’s so different from the boys that Jenny has heretofore been surrounded by. Graham (David Beard), a boy her own age who likes her, is easily flustered by her father and seems childlike in comparison to David, who is so self-assured and cool that he ends up making her father nervous and eager to impress. If Jenny were older and had more experience, she’d be wary of how expertly David is able to manipulate her very protective, very guarded parents. If someone seems to know the exact right thing to say at all times, they’ve probably had a lot of practice.

As Jenny and David’s relationship grows more serious, her future at Oxford becomes more obscure. To her shock, this is just fine by her father who has so strictly directed her life up until this point for the purpose of getting into Oxford, and she realizes that what she’d always been told was her future was in reality just a backup plan until she could find a suitable man to take care of her. “What was the point?” she asks repeatedly, wondering why, if all she was ever really expected to be was a housewife, all those other things were necessary. At a certain point she finds herself having to choose between David and Oxford and in light of all that she’s just learned, it seems to be an easy choice. The consequences of that choice, however, prove to be a very hard lesson indeed.

The screenplay by Nick Hornby is strong and, coupled with the direction by Lone Scherfig, allows the characters plenty of room for layers and details. David is not a cardboard villain, though we never really trust him for obvious reasons. He seems genuinely to care about Jenny and be affected by how things turn out and it’s surely evidence of Sarsgaard’s skill that you end up feeling a bit sorry for David – not as sorry as you end up feeling for other characters, of course, but at a certain point being able to feel anything for him is a victory on Sarsgaard’s part. There’s something very sad about David, whose existence is built entirely on illusions and deceit, and it’s heartbreaking (though expected) when Jenny finds that out.

I don’t think there’s anything I can say about Mulligan’s performance that hasn’t already been said, and better, by other people. She’s a star – charismatic, nuanced, and assured. She seems to inhabit Jenny easily and her instincts as an actor are solid. Molina, as her father, is wonderful, particularly in scenes where he’s dealing either directly or indirectly with David. David makes him nervous, not because of his interest in Jenny, but because he seems to come from a higher social order. He wants to impress David and he’s so taken in by David’s flashiness that he practically shoves Jenny into David’s arms. His speech to Jenny about how he, too, has been hurt in the situation is really moving and one of the film’s best moments. I would be remiss, in speaking of supporting performances, if I didn’t also mention Rosamond Pike, who I thought was absolutely delightful as David’s faux sophisticate, blank slate friend Helen. The expressions on her face alone were enough to win me over, but she gets some great (and ridiculous) lines as well.

I think, in the end, that An Education’s greatest strength lies in its ability to do what so few of its characters seem able: to recognize that knowledge can be valuable in and of itself. The lessons Jenny learns are painful and in some respects hold her back, but she knows more than she did before about things that can’t be gleaned from books. It might not help her at Oxford, but there will be life after Oxford and she’ll be ready for it.