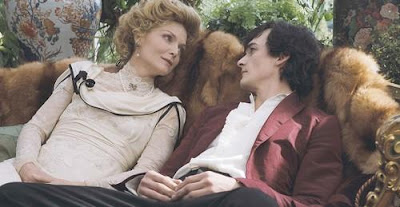 Cheri is a movie that has a lot going for it on paper. It reteams Michelle Pfeiffer with her Dangerous Liaisons director Stephen Frears, it offers a showcase for beautiful period costumes, and it capitalizes on popular culture’s current fascination with relationships between older women and younger men. There are moments when it seems delightful, but in the end it feels like an exercise in going through the motions.

The story, based on a novel by the same name by Colette, is set in the early 20th century, which is kind of a tricky period because it shows the overlap between a kind of fashion that we generally think of as being long in the past, and technology that is relatively recent. Even though I know that it’s historically accurate, it was still somewhat jarring to see the characters riding around in cars rather than carriages. Anyway, the film follows Lea de Lonval (Pfeiffer), a much celebrated courtesan attempting to reconcile herself to the fact that she is becoming “a woman of a certain age.” The throngs of suitors are long behind her and life is much quieter than it used to be and much of her time is spent in the company of Madame Peloux (Kathy Bates), a friend by virtue of the fact that as women of ill repute, their options are limited in terms of their social circles. As a lark, Lea becomes involved with Madame Peloux’s son, nicknamed Cheri (Rupert Friend), a dissolute young man for whom even the demi monde has become boring. It is supposed to be a harmless fling but six years later the two are still together.

Lea and Cheri work at keeping their relationship light and playful and it isn’t until Madame Peloux arranges her son’s marriage to the daughter of a former colleague that they realize that they’re in love. Cheri marries his intended and Lea goes away, entering into a new affair with a new young man. When word gets back to Cheri that Lea has moved on, his marriage begins to suffer, which in turn prompts Lea to return to Paris but… things aren’t quite so simple that they can just reunite and disappear together, as they soon discover.

First and foremost, the film looks beautiful. The cinematography, costumes, art direction – all are gorgeous and hopefully the film will be remembered come Oscar time in those categories. The score by Alexandre Desplat is also quite good, though not as memorable as some of his other recent work. Unfortunately, I found the rest of the film to be rather flat. The actors don’t really seem at ease in their roles – Pfeiffer is surprisingly stiff (it pains me to say that because I quite like her as an actress) and Bates overcompensates for something by going way, way over the top (if her character had a mustache, she’d twirl it) – and it makes the whole thing seem a bit undercooked. Surprisingly it’s Friend, whose work I’m not really familiar with, who comes out on top, taking a character that could be nothing but a selfish playboy with a few good zingers and giving him depth, particularly near the end. His character reminded me quite a bit of Gaston from Gigi (which I suppose shouldn’t be a surprise since both films are based on novels by Colette): both are men who have every vice at their disposal and burn themselves out on debauchery, discovering in the process that they do want more and are perhaps capable of tending to someone else’s needs rather than worrying solely about their own. Cheri’s final exchange with Lea is wonderful because it allows him to show that he has, in fact, grown as a person and Friend handles this new side of the character with aplomb.

I suppose the biggest problem for me is the film’s abrupt shift in tone about three quarters of the way through. It begins very cheekily and sets you up to expect a comedy and then it ends on a very dark, very tragic note. The final shot echoes that of Dangerous Liaisons, but while that worked splendidly for the earlier film, it just feels out of place here and almost makes it seem as if Frears is trying to rest on the laurels of his masterpiece. Cheri isn't really a bad movie, but I found it quite disappointing.

As much as I love Michelle Pfeiffer, her British accent was horrible...

It really was. I'm actually not sure if it was supposed to be a proper British accent or that "transcontinental" accent favored by a lot of actors in the 1930s, but Kathy Bates as doing it too and it was so distracting.