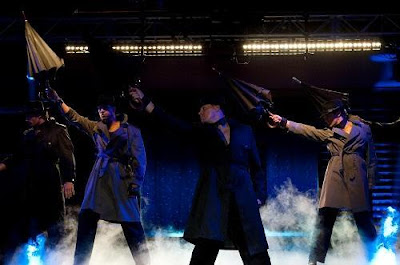 A plot point by plot point description of Magic Mike would make it sound like a basic backstage performance story, where a wide-eyed tyro is taken under the wing of a solid mentor, and everything is fun until suddenly it isn't so much fun anymore. Fortunately for the film, it is helmed by Steven Soderbergh, a director with enough strength of craftsmanship that he can take well-worn genre notes and make them sing like new. This isn't to say that Magic Mike is a brilliant piece of work, but it's a solid enough drama, and a fairly entertaining one at that.

Channing Tatum stars as "Magic" Mike, a sort of jack-of-all-trades who does various jobs, including stripping, in order to put away money towards future business ventures he has in the works. While working constrution he meets Adam (Alex Pettyfer), an aimless young man whose inability to hold down a job has reduced him to sleeping on the couch of his sister, Brooke (Cody Horn). The two become friends and Mike brings Adam to work as Xquisite, a strip club run by Dallas (Matthew McConaughey), whose goal is to one day move his revnue from Tampa to the potentially more lucrative location of Miami. Though he's a bit reluctant at first, the appeal of money, female attention, and all-night parties is too much for Adam to pass up and, in spite of Brooke's misgivings, he joins the Xquisite team.

Though it's all fun and games at first, Mike's promise to Brooke that he'll look out for her brother becomes increasingly difficult to keep once drugs, and a side job in drug dealing, enter the picture. Things start to spin out of control for Adam at the same moment as Mike begins to realize that he's not building towards a better life so much as he's stuck in his current one. He enters into a power struggle with Dallas, realizes that the girl he's been hung up on (Olivia Munn) has blown him off, and is forced to make a choice between the future he's been working for and someone that he cares about.

Although the film was marketed as a love story between Mike and Brooke, their relationship is platonic - and sometimes antagonistic - for most of the story. It's a refreshing change of pace because rather than the "instant love" that most films hinge their narratives on, this one is about two people actually getting to know each other over a period of time (three months, in this case), gradually finding common ground, and gradually coming to like each other as people. This isn't to say that Magic Mike is entirely successful in this aspect of its story - I don't think that Tatum and Horn actually have much chemistry to begin with, an especially not in comparisson to the chemistry that Tatum has with Munn in their few scenes together - but I appreciate the way that the film structures it.

There is a lot of skill to the way that the film unfolds, giving a bit of depth to a story that could easily have been nothing but surface. Soderbergh makes some interesting directorial choices and keeps the film sharp and on point by playing to the strengths of his cast. Tatum is not the greatest of actors, but he does have some charisma and Soderbergh knows how to use him to the best effect. His performance is rounded out by fine supporting performances, particularly from McConaughey, whose role sometimes verges on self-parody but ultimately never crosses that crucial line. Its his performance that Soderbergh relies on to set the film's tone, which is a smart move because it's a performance that is as smart and assured as the film itself. Magic Mike is not a classic by any means, but it is most certainly a success as a film.
Posted by Norma Desmond at 8:00 AM