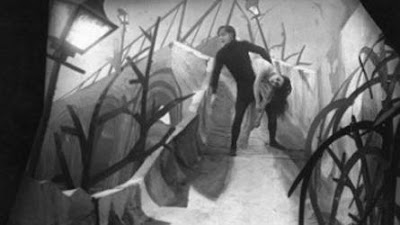 Robert Wiene's German Expressionist masterpiece The Cabinet of Dr. Caligari is, perhaps, the only film ever made where the production design is the star. Its jagged, highly stylized sets are some of the most memorable ever put on film and go a long way to creating the film's nightmarish vision of madness and horror. Caligari is a film that stands the test of time in part because it presents a vision so weird that it can never seem dated, but also because it's simply a great piece of filmmaking.

The film begins with its protagonist, Francis (Friedrich Feher), relating a story to another man. It begins as a simple tale of a love triangle between Francis, his best friend, Alan (Hans Heinrich von Twardowski), and Jane (Lili Dagover), the woman they both want for their wife. When Francis and Alan take a trip to the local carnival, they have their first encounter with Dr. Caligari (Werner Krauss), whose exhibit centres on a somnambulist named Cesare (Conrad Veidt), whom Caligari controls through hypnosis and keeps in a cabinet that looks like a coffin. Caligari claims that Cesare's state allows him to read the future and when Alan decides to test him by asking how long he will live, Cesare reveals that Alan will be dead before the night is over. The prophesy proves true and Alan is violently and mysteriously murdered, becoming one of a series of murders.

Francis, now engaged to Jane, investigates Caligari and Cesare for the murders, prompting Caligari to set Cesare after Jane. Caligari's plans go awry, however, when instead of murdering Jane, Cesare becomes entranced by her beauty and abducts her and after a long chase releases her and then promptly dies of exhaustion. Francis, meanwhile, goes looking for Caligari and eventually learns that the doctor is the director of an insane assylum who is obsessed by, and has been recreating, a myth about a monk named Caligari who controlled a somnambulist and made him do his bidding. The story is effectively wrapped up from there - Cesare is dead and Caligari takes the final descent into insanity when he finds out - until it takes a sharp turn, becoming even more nightmarish and horrifying, if that's possible.

The Cabinet of Dr. Caligari has had a well-deserved reputation as one of the best silent horror films ever made, and though sensibilities have changed enough over the course of 92 years, it still remains a high-water mark of the genre. It really isn't scary from the perspective of 2012, but it is a great psychological drama and you can see its influence on films that followed, even such relatively recent films as Edward Scissorhands and Shutter Island. The film is high in style and is certainly one of the most distinct looking films ever made, in addition to being one of the most important. Though silent films tend to be a bit of an acquired taste for audiences now, Caligari is so easily accessible, so completely entrancing, that it would make for an excellent introduction to the art form. It's amazing, when you consider how many films made now are so easily forgotten or become dated so quickly, that any film can stand the test of time like this one. Seriously: 92 years and it hasn't aged a day.
Posted by Norma Desmond at 8:00 AM