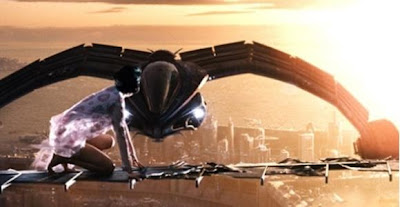 Cloud Atlas is a lot of things - ambitious, extravagant, messy, a mix of genres with sometimes jagged pieces that don't quite fit together - but it is never, ever boring. If audiences embrace it more than critics have, it may well develop a reputation as one of the most entertaining movies of the year. That is has some pretty fierce detractors is not surprising - the film does have its flaws - but, in the end, it is less a film than it is an experience, one you are either willing to give yourself over to or you're not. If you are, you'll certainly be rewarded.

Based on the novel by David Mitchell, Cloud Atlas is split into six stories. The first, set in the South Pacific in 1850, centers on Adam Ewing (Jim Sturgess) and his relationships with Dr. Henry Goose (Tom Hanks), a friend who proves to be a foe, and Autua (David Gyasi), a runaway slave and stowaway on the ship transporting Ewing and the rest of the party back to the US. The second is set in Scotland in 1931 and follows Robert Frobisher (Ben Wishaw), an aspiring composer who enters into a fraught relationship with Vyvyan Ayrs (Jim Broadbent), a famous composer who attempts to take credit for Frobisher's great work, which he calls the "Cloud Atlas Sextet." The sextet plays a small part in the third story, set in 1975 in San Francisco, and centering on a Luisa Rey (Halle Berry), a reporter investigating a nuclear power plant. The fourth story, set in present day UK, is about book publisher Timothy Cavendish (Jim Broadbent), who ends up on the run from a gangster family and then locked up in an old folks' home. The fifth story jumps ahead to the 22nd century when the old cities have been partially submerged under water. In Neo Seoul, a clone, Sonmi-451 (Bae Doona), joins the rebellion against a totalitarian society, setting herself up to become a symbol for the characters in the sixth story. That story, set "106 winters after the fall" centers on Zachry (Tom Hanks), a tribesman who joins forces with Meronym (Halle Berry), a woman from a more technologically advanced society.

The first question, obviously, is what each story has to do with the others. The connections are made in several ways, most obviously through the comet shaped birthmarks sported by several characters and through the stories themselves. Ewing's travel journals are read by Frobisher as he's writing his sextet. Frobisher's letters to his former lover, Rufus Sixsmith (James D'Arcy), are found by Rey after Sixsmith attempts to give information to her about the power plant. Rey's experiences with the power plant conspiracy are ultimately used as the basis for a novel, a manuscript of which is read by Cavendish. Cavendish's story is later turned into a movie (in which he is played by Tom Hanks) which Sonmi-451 watches. Somni-451 records her manifesto, which partially survives in written form during Zachry's time as the basis for a sort of religion. The recording is also ultimately recovered by Meronym during her adventure with Zachry. The film is, in a way, a celebration of the power and importance of storytelling and the way that one narrative can spin out of another. Though Cloud Atlas strains, at times, to show that everything and everyone are in some way connected, despite distances of time and space, it is effective at showing how events can continue to ripple through history.

Cloud Atlas draws its connection in subtler, less telegraphed, ways as well by rhyming the beats of one story with that of another. Take, for example, the two major characters played by Broadbent: Ayres is a selfish egotist who, after rebuffing a romantic overture from Frobisher (who is, incidentally, having an affair with Ayres' wife), attempts to prevent him from leaving his estate so that he can take credit for the Cloud Atlas sextet once it is completed. In 2012, Cavendish, having earned the ire of his brother (Hugh Grant) for having an affair with his wife (Wishaw), ends up locked up in a nursing home housed in what was once Ayres' estate. The Wachowskis have said in interviews that characters played by one actor are meant to be one soul, reincarnated several times over - a notion which I don't think works quite as well or as elegantly as they would like it to - and, if we accept that at face value, then the fate of Cavendish is quite fitting, given the actions of Ayres. Or consider the irony of two characters played by Grant, one of which makes an appearance in the Ewing story as one of the "civilized" men involved in the slave trade, while his character in the "after the fall" story (which takes place in the same geographical location) is the Kona chief, a cannibal who, along with the rest of his tribe, destroys everything around them. It's those quiet connections that end up being the most effective, because they're more naturally embedded in the narrative than the more overt links between the stories and characters.

There's a lot of depth to be explored on a thematic/narrative level, but Cloud Atlas is also an incredibly interesting film on a visual level. The universe created by the film, in all its incarnations, is fascinating and surprisingly cohesive given that each of the six stories occupies a different storytelling genre and were divided between different directors. Cloud Atlas is often visually striking, particularly in its two storylines set in the future, and it whips along at a fast pace. There's been some controversy about the makeup employed to allow the actors to appear as multiple characters, crossing lines of age, gender and race, and while I get that the device is being used as a means of expressing that the content of a soul is not a reflection of the prejudices attached to a person's outer appearance, I ultimately don't think the film uses this device successfully enough to justify the controversy. In some cases the makeup is so flawless that you literally can't recognize the actor behind it, but all too often the makeup is just too obvious, making a character look less like a human being and more like a special effects monstrosity. The idea behind it is admirable, but the execution definitely has its flaws.

I don't know how Cloud Atlas is going to stand up over time, whether it will prove to be an interesting failure or a watershed piece that moves film is a whole new direction, but I do know that I haven't been able to stop thinking about it. It's a highly thought provoking and challenging piece that I hope will find the audience it so richly deserves.
Posted by Norma Desmond at 8:00 AM

I agree that this movie was visually stunning, and from a technical standpoint it was definitely a great achievement.

But aside from Frobisher's storyline, I was just completely disappointed with the whole thing. I felt like most of the storylines jumped away before we got to know or care about the characters, and jumped back and forth in an attempt to keep all the action happening in every timeline together.

And as for the makeup... hooo boy, the makeup. I found it extremely problematic from a social awareness standpoint, from a technical standpoint (which character made that work, ever? It was just AWFUL), and from a thematic standpoint.

What was the purpose of it? Aside from the two parallel storylines with the same actors playing lovers (and their contrasted conclusions), I didn't think it served any purpose or made any sense, particularly since the actors played such different roles. Tom Hanks was sometimes one of the 2 main "souls," other times he was... well, not (to avoid a spoiler). Sometimes Boona Dae was part of the main pair, other times she was a glorified extra. What was the point?

Great movie review. I am so excited to see this one. Seems to be a either love it or hate it kind of film.