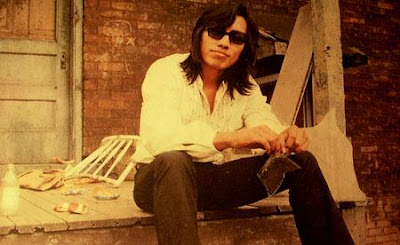 They investigated every inch of his two album covers and combed through his lyrics looking for something, anything, that would provide a clue as to who Rodriguez was and where he came from. To the shock of his fans in South Africa, where he was as big, if not bigger, than Elvis, he was unheard of in his native America. His life and death were shrouded in mystery until two fans - journalist Craig Bartholomew Styrdom and record store owner Stephen "Sugar" Segerman - undertook the task of learning the truth about what happened to him. In the process they discovered a story more incredible than they could have imagined.

Searching for Sugar Man begins as a mystery and director Malik Bendjelloul and cinematographer Camilla Skagerstrom unfold the first part of the film with all the atmosphere of a ghost story. At the centre is Rodriguez, a singer/songwriter from Detroit who made two albums - 1970's "Cold Fact" and 1971's "Coming from Reality," both critically acclaimed but commercial flops in the US - before being dropped from his label. He disappeared from the music scene after that and rumors of his death ranged from extraordinary claims that he self-immolated or shot himself on stage after a bad performance, to more commonplace claims that he died of a drug overdose. He never knew that though his music made no impression anywhere else, he had become one of the best selling artists in South Africa, his two albums going gold several times over.

Bendjelloul alternates the setting, moving back and forth between Detroit and the places where Rodriguez honed his sound and got his start, and South Africa, where his music had its greatest impact, becoming not just something that people listened to and enjoyed, but something which helped fuel the anti-Apartheid movement. His music is described as inspiring anti-authority views and, indeed, certain songs on his albums were considered so inflammatory by the establishment that they were brutally censored - not only were they not allowed to be played on the air, but the tracks were scratched out of the albums to ensure that they couldn't be played at all. Nevertheless, Rodriguez became a kind of revolutionary symbol and his music enjoyed a cross-generational appeal that has kept his albums selling for decades. But while his music was known throughout South Africa, nothing was known about the man himself until the mid-1990s, when Bartholomew Styrdom set out to write a story that revealed the truth of Rodriguez's death, and Segerman started a website inviting anyone with any information at all about Rodriguez to share it. Eventually he would receive a message - not from Rodriguez, but from someone close to him. If you don't know what happened after that and intend to see this film, I highly recommend learning nothing more about the story. This is the kind of film best gone into cold.

In the film's opening sequences, Bendjelloul does an excellent job at establishing Rodriguez as a kind of myth, albeit one which never took root in his native soil. He's described playing a show with his back to the audience, further obscured by the wall of smoke that fills the room. He's an enigma who, as the film unfolds, is revealed to be an almost saintly figure caught in the middle of a strange set of circumstances - circumstances that no one really starts to understand until two decades after the fact. The question which hangs over the film - and is never answered, though the film does contain a revealingly defensive interview with the former owner of Sussex Records - is what happened to the money made in South Africa for the sale of Rodriguez's albums. It obviously didn't go to him, since if it had, he would have known that he had a following in South Africa, but, as one interviewee points out, someone obviously got rich off those album sales. One could argue that the film could push this point a little bit harder, but given what the film reveals about Rodriguez the man, a gentler approach is perhaps more in keeping with the spirit of his character.

Though Searching for Sugar Man already has a lot going for it on the strength of its story alone, the film also has a great deal of visual flair. In telling the story Bendjelloul makes use of interviews, archival footage, recreations, and animation in order to put the pieces together and Skagerstrom's cinematography is absolutely stunning in shot after shot. This is easiy one of the best looking films I've seen so far this year, in addition to being one of the most entertaining. Though the story has the slight tinge of tragedy, it is ultimately a story of triumph and a very inspiring one at that. See it, if you can.
Posted by Norma Desmond at 8:00 AM