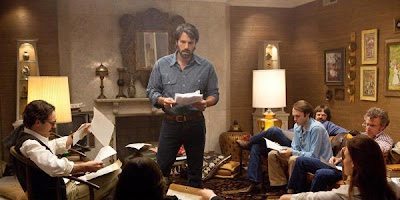 When it comes to movies and marketing, a little hype can go a long way. Sometimes hype sets expectations too high, making a perfectly good film seem disappointing, but every once in a while a film is equal to the advance word and Argo is certainly one of them. All the talk about the film being a legitimate Best Picture threat is entirely justified, which is all the more amazing when you consider that the film is so thoroughly a genre piece. A taut suspense thriller that plays all the right notes at exactly the right time, Argo is the kind of movie that is "old fashioned" in the best possible way.

Loosely based on the true story of the escape of six Americans from Iran during the 1979 hostage crisis, Argo stars Ben Affleck (who also takes on directing duties) as CIA exfiltration expert Tony Mendez. After a brief prologue which contextualizes the circumstances that would eventually lead to the Iranian Revolution, followed by a sequence in which militants take over the U.S. embassy in Tehran with only six escaping and finding refuge in the home of Canadian Ambassador Ken Taylor (Victor Garber), the film jumps ahead several months as the US State Department begins exploring options to get the six home. Mendez and his boss, Jack O'Donnell (Bryan Cranston) are brought in to consult on the State Department's proposed plans, shooting holes in each before coming up with one of their own. While watching a Planet of the Apes film with his son, Mendez comes up with a plan to pass the six Americans off as part of a Canadian film crew sent to Iran to scout locations for a film and, with the help of his friend, Hollywood makeup artist John Chambers (John Goodman), and producer Lester Siegel (Alan Arkin), sets up a fake production company and options a script for a Star Wars rip-off called "Argo." Though everyone who hears about the plan is skeptical, a lack of better alternatives ensures that the plan is given the go-ahead and Mendez sets off for Iran.

Meanwhile, for the six Americans - Bob Anders (Tate Donovan), Mark and Cora Lijek (Christopher Denham and Clea Duvall), Lee Schatz (Rory Cochrane), and Joe and Kathy Stafford (Scoot McNairy and Kerry Bishe) - life has been reduced to the confines of the Canadian Ambassador's residence, staying inside at the best of times and hiding in the crawl space at the worst, and waiting for the other shoe to drop. When Mendez shows up and reveals the plan to them, they don't express a lot of confidence in it but they also know that the clock is ticking and that it's only a matter of time before the militants realize that they're missing some hostages and come looking for them. Mendez gets them as ready as he can within the space of two days but at the eleventh hour learns that the US government is pulling the plug on the operation. Knowing that there's no time left to lose, however, Mendez presses ahead with the plan, more or less just hoping for the best.

Argo is a film of incredible tension, perfectly crafted to wring every drop of suspense out of the situation as possible. The opening sequence, in which diplomats at the embassy shred documents and wait like sitting ducks while militants storm the building, is masterfully put together and the climactic sequence is a real nail bitter, even if you go into the movie knowing how things actually turned out. The movie fudges facts, as all "true story" stories have do for the sake of narrative cohesiveness, but what it may lack in strict accuracy it more than makes up for in effectiveness. Argo is a deeply involving piece of filmmaking that deftly weaves a comic thread (courtesy of its Hollywood sequences) into its sharply wrought political thriller storyline, creating a fine balance of tones. The film is expertly executed and more evenhanded that you might expect with respect to its depiction of Iranians. The opening prologue makes it clear that these events didn't occur in a vacuum and, without in any way excusing the actions of the militants, makes a point of demonstrating that the US didn't exactly have clean hands in the situation. This isn't to say that the film doesn't have a clear idea of who its heroes and villains are, but it does make an effort to infuse the story with a shade of complexity regarding the socio-political context of the situation.

Though the film is best described as an ensemble piece - with Arkin, Goodman and Cranston each turning in great supporting performances - in the end it all rests on Affleck's shoulders. Although I think the film might have been slightly better served with a more expressive actor in the lead (not to mention an actor who is actually latino), Affleck turns in fine work here, playing Mendez as a man whose facade of confidence masks doubts that he knows he can never show. His performance is a solid centre around which to build the story which, as I said, unfolds in expert fashion. Argo is a success on virtually every level and I expect that we'll be hearing about it a lot over the next few months as awards season gets underway.
Posted by Norma Desmond at 8:00 AM

The story opens on November 4, 1979 when Islamist militants took control of the U.S. Embassy in Iran. 52 Americans were taken hostage and held for 444 days until their eventual release. In Argo 2012 six American's were able to sneak out of the Embassy and find refuge unbeknownst to the Iranian rebels. The CIA, lead by agent Tony Mendez (Ben Affleck) hatched a plan to rescue the house entrapped Americans by posing as producers of a fictional science fiction film. The idea was that Mendez would land in Iran and then convince the six Americans to assume roles as screenwriters, directors and co-producers of the film and they would all fly out of the country together once location scouting was complete in 48 hours.