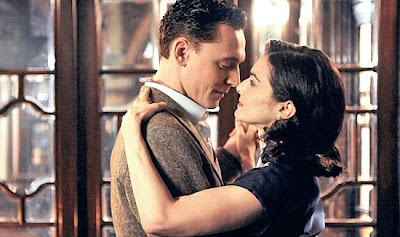 Despite the fact that not much else was playing at the time, I had avoided The Deep Blue Sea when it was in theaters because a cursory look at its plot made it sound similar to The End of the Affair, the 1999 film starring Julianne Moore and Ralph Fiennes, which managed to be approximately a million years long despite having a runtime of only 120 minutes. Appearances can be deceiving, however, because The Deep Blue Sea is really very little like that film and is in fact a deeply engrossing drama anchored by one of the finest performances I've seen all year. It's also gorgeously photographed, which leaves me kicking myself for having missed the chance to see it on the big screen. Lesson learned.

From the first scene, which begins with a marvelous tracking shot (later mirrored in the film's final shot) that quickly establishes the operatic sweep that writer/director Terence Davies will infuse into what is essentially a small-scale domestic drama, The Deep Blue Sea announces itself as a film of technical precision and visual flourish. The shot finally settles on Hester Collyer (Rachel Weisz) and then the film begins moving in a dreamy, elliptical fashion between the preparations Hester makes for a suicide attempt, and memories of moments she's shared with both her husband, William (Simon Russell Beale), a much older Judge, and her lover, Freddie (Tom Hiddleston), a former RAF pilot. The suicide does not end Hester's life but could spell the final end of her relationship with Freddie when he finds out, something which she desperately tries to prevent.

The story moves back and forth between the past and the day of the suicide attempt and establishes the contrasts between Hester's two relationships. William is a man she respects and admires but feels no passion for; Freddie is a man that she feels passion for but comes to realize can never make her whole because he can never feel for her to the same degree that she feels for him. Her relationship with William is one defined by restraint and propriety (during a particularly awkward and intense visit with William's mother, Hester is advised that passion, which always leads to something ugly, should be avoided in favour of "a guarded enthusiasm"), while her relationship with Freddie is defined by recklessness and upheaval. She leaves William, who warns her that he'll never let her have a divorce, and moves into a small flat with Freddie, at first playing the part of "Mrs. Page" before eventually coming clean with the landlady Mrs. Elton (Ann Mitchell). Though she loves Freddie desperately, the relationship quickly begins to fall apart, withering from the inside out under the pressure of Hester's guilt and her frustration over Freddie's inability to give her the kind of emotional connection she needs, which leaves her isolated and, ultimately, feeling as though there's nothing left worth living for.

As the story takes place in the shadow of WWII, death and destruction pervade the narrative. The effects of the war remain apparent both in the damage to buildings in the neighborhood where Freddie and Hester make their home and in Freddie's volatile psyche. At one point Hester comments that Freddie hasn't been truly happy since 1940, a statement which sheds light on what becomes of her relationship with him: Freddie lives for adventure and danger, something the relationship had when Hester was still with her husband. Now that the threat of discovery is no longer there, Freddie's passion has cooled if not disappeared completely. He doesn't even seem to see her anymore, as evidenced by the scene in which he comes home on the day of her suicide attempt, having forgotten that it was her birthday and not even questioning the fact that it's the middle of the day and she's still undressed, clad only in a slip and a robe. For all intents and purposes the relationship has burned itself out and all that remains is the goodbyes, a sentiment Freddie is quick to adopt but which Hester fights against. She's given up everything for Freddie and if he were to leave, she doesn't know what she'd do - all she knows is that she can't return to the stifling and all too formal quality of the life that she had with William.

Based on the play by Terence Rattigan, The Deep Blue Sea has the air of tragedy and a finely tuned attention to character detail. Although Davies sometimes keeps the audience at arm's length - for example, a few scenes where we can see that the characters are speaking, but their voices are drowned out either externally, by the film's score, or internally, by voices or music around them - he nevertheless creates a sense of intimacy, and a sense of the suffocating atmosphere that confronts Hester both in her life with her husband, and in her life with Freddie. The film is a marvel of tone sustained, never losing an ounce of its symphonic quality as it explores Hester's dilemma.

At the centre of it all is Weisz's pitch perfect performance as Hester, who knows that she has behaved badly and foolishly but sees no other alternative. Her love for Freddie is all consuming, growing perhaps stronger the more unrequited it becomes. It would be easy for a character like Hester to seem pathetic, but she is at every turn compelling in Weisz's hands. She's long been an actress who can be depended upon to deliver quality performances (even in B movie fare like the Mummy movies, she still brings to her role exactly what it needs) and here she delivers what is arguably her best performance to date. That the film is unlikely to garner the attention of Oscar on her behalf (or, indeed, on behalf of Davies and cinematographer Florian Hoffmeister, whose work here is brilliant) is a shame, but sometimes a good movie and/or performance is its own reward.
Posted by Norma Desmond at 8:00 AM