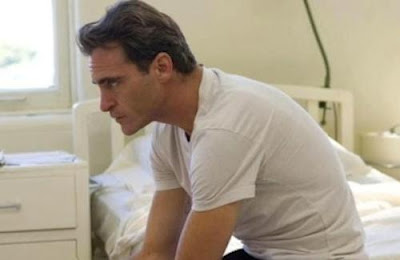 The Master, Paul Thomas Anderson's latest film, is an ambitious, enigmatic, beautifully photographed, and sometimes brilliant piece of work. I feel like I should have liked it more, but as I left the theater my feelings were more akin to a shrug. Individual scenes in The Master are amazing but as a whole I found the film rather unaffecting. It is by no measure a bad movie. It's a movie I admire in many ways, but one which ultimately left me unmoved.

One of the central questions of The Master is who, exactly, is the "master?" Another is what does it mean to be a master? As the film opens we meet Freddie Quell (Joaquin Phoenix), a sailor who increasingly finds that he is the master of nothing, particularly himself. As WWII ends, Quell is released back into society, plagued by post traumatic stress and unable to engage with people in a functional way. He's a dedicated alcoholic who will drink anything in seemingly any combination, and who one night wanders onto a boat chartered by Lancaster Dodd (Philip Seymour Hoffman), the leader of a movement known as "The Cause." Dodd is celebrating the marriage of his daughter and takes Quell under his wing, sharing his teachings with him and allowing him to participate in "processing," a psychological exercise that allows Dodd to uncover bits and pieces of Quell's past and gain a measure of his psychological state. Though Quell is unpredictable and prone to fits of violence, Dodd sees something in him and becomes determined to make him an example of what The Cause can accomplish.

Quell quickly falls in line with Dodd, defending him from naysayers and critics, allowing no dissent to go unpunished. His instability brings him into conflict with Dodd's wife, Peggy (Amy Adams), who to all appearances is the meek wife, but is actually the true power behind the throne (the master's master, if you will). Peggy comes to believe that teaching Quell is a waste of time, that he will never give up his bad habits and never become a true member of the movement. Dodd maintains his interest in Quell, even as it is suggested to him that Quell may be a spy, but Quell, despite his fierce, desperate need to believe in Dodd, begins to slip away, seeing him for the fraud that he really is.

That the film is well-acted goes without saying (though Adams' performance does, at times, feel just a little too mannered). As portrayed by Hoffman, Dodd is a charismatic, intelligent and confident man whose smooth facade begins to crumble at the slightest bit of pressure. His precisely crafted persona falls away when the questions get too difficult to defend and his intensely emotional reactions are not unlike those of Quell, though they do far less physical damage. As Quell, Phoenix is quite simply amazing, delivering a portrayal so vital and alive that it is at times startling. His is a ferociously physical performance in which his broken gait and his face, forever contorted in misery, serve to underline the narrative and fill in a few of its blanks.

Much has been written about what The Master "means" and I believe that the film is open to a degree of interpretation, as Anderson feels no need to unpack the narrative for the benefit of the audience. What has stuck with me is that The Master is a love story between Quell and Dodd, two men forced by the circumstances of a socially and sexually repressive post-war world to bury their attraction (to "master" it) and express their feelings in more socially acceptable ways. Quell's obsession with sex - and the often adolescent ways he finds to express it - has an aggressive, sometimes defensive quality to it. Look at the ink blot scene, in which he asserts that everything looks like genitalia, or the opening sequence when he simulates sex with a sand sculpture of a woman while his fellow sailors look on - this is a man who feels he has to prove this aspect of himself, who goes out of his way to impress on the men around him how much he desires women. If he is denied the ability to physically express the feelings he actually has (for example, for Dodd), then the frequent fits of violence make even more sense, as he's expressing himself in a way that is both physical and more socially acceptable for that place and time.

Further, Quell's only openly acknowledged romantic attachment is to a girl who is "safe" both because he had an easy escape from her (serving in the war and not returning) and because due to her age (16) she would still be sexually innocent enough that his behavior as a suitor would never be challenged or scrutinized by her. It's a relationship in which he can easily maintain the power position. Compare that to the relationship between Dodd and Peggy, which is far more complex in its power dynamics. As the bond between Quell and Dodd grows, so does Peggy's mistrust and jealousy of the interloper. The scene in which Peggy demonstrates her dominance of her husband comes after a scene in which Dodd's seductive quality is expressed through Quell's imagination, as he watches Dodd entertaining a room full of devotees and suddenly pictures all of the women naked (the women may be naked but it's Dodd and the effect he has on them that is the focus of attention). Peggy is amongst them and the look that she turns on Quell suggests her awareness - and disapproval - of the depths of his attachment to Dodd. It's a warning look which is followed by her asserting her power with Dodd, an attempt to sever the connection at both ends.

As I said at the top, there are things about The Master that I admire and I think there's a lot of craft to it. That being said, as a whole I found the piece wanting. It contains individual scenes which I believe will prove to be amongst the absolute best of any film this year, but the work in its entirety left me cold.
Posted by Norma Desmond at 8:00 AM

Hi! Great site! I'm trying to find an email address to contact you on to ask if you would please consider adding a link to my website. I'd really appreciate if you could email me back.

Thanks and have a great day!

Sure - what's your blog's address?