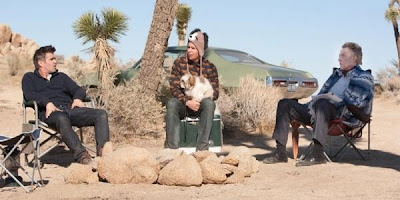 It's not quite a movie within a movie story. It's more like an idea for a movie within a movie where the characters seem vaguely aware that they themselves are ideas for characters in that idea for a movie. Seven Psychopaths, writer/director Martin McDonagh's follow-up to 2008's In Bruges is a wickedly clever, ultra self-aware, and sometimes brutally violent comedy and easily one of the most entertaining movies of the year.

Colin Farrell stars as Marty, a screenwriter whose latest project is titled "Seven Psychopaths." So far all Marty has is the title and his best friend, Billy (Sam Rockwell), is determined to help him write it by any means possible, including giving him suggestions for potential psychopaths to write about, and encouraging him to stop drinking so that he might actually get some writing done. He also places an ad in the paper soliciting actual psychopaths to contact him so that Marty can interview them, resulting in Marty's meeting with Zachariah Rigby (Tom Waits), a bunny-toting former killer of serial killers. The theme of the serial killer of serial killers comes up more than once, also figuring into a news story around town about the so-called "Jack O'Diamonds Killer," which Billy is particularly keen on and wants to incorporate into Marty's screenplay.

In addition to being Marty's friend (and Marty's girlfriend's enemy), Billy is also a struggling actor and, along with his friend Hans (Christopher Walken), a successful dog thief, kidnapping the dogs so that Hans can return them to their owners for the reward. Unfortunately Billy's latest canine acquisition belongs to Charlie Costello (Woody Harrelson), a gangster who will kill anyone he has to in order to get his beloved Shih Tzu Bonnie back. To escape being killed, Marty, Billy and Hans flee to the desert but are generally more concerned with finishing Marty's screenplay than with the threat of Charlie and his henchmen. To Billy, the line between the screenplay and the actual situation seems to have become indistinguishable and he eargerly awaits the big shoot out with Charlie's gang and as the film races towards its conclusion, the story bgins to turn itself inside out, going for a wild ride down the cinematic rabbit hole.

McDonagh keeps things moving quickly and creates a nice balance between comedy and violence, which is nicely supported by the film's cast. Farrell plays the story's straight man, the only sane person in a sea of lunatics whose primary role is to react; it could have been a thankless task but Farrell is able to make more of it and brings a healthy dose of reality to the proceedings. Meanwhile, Harrelson, Walken and Rockwell bring different kinds of wild energy that propel the film forward. Harrelson is delightfully unhinged as the mobster who just really loves his dog and Walken is an actor who has the ability to be hilarious simply by being there. The real star of the show, however, is Rockwell, whose character has to progress from "a bit weird" to "totally crazy" within the span of the movie and manages to make that happen without the progression feeling like it's come out of nowhere. The degree of his own psychosis becomes clear to us (and Marty and Hans) gradually and though the role demands that the performance be a bit over the top, I think that Rockwell demonstrates an admirable level of control over the material. Billy's "crazy" never seems cartoonish. It always feels like he comes by it naturally which makes the performance especially effective.

Though Seven Psychopaths isn't going to be to everyone's taste, it's a film that I fully expect will find a dedicated following. It is not only a really good action comedy, but a really good commentary on the action comedy genre. From Billy's dissection of how to make the climax its most effective, to Hans' comment to Marty after reading his script that he has no idea how to write women, the film is self-aware enough to deliver the goods with a wink to the audience. It also refuses to dumb things down and is so well written and executed that the individual stories of the psychopaths that get told throughout the course of the film work both within the context of the larger story and as their own self-contained short stories. This is the rare film that is as clever as it is absolutely entertaining.
Posted by Norma Desmond at 8:00 AM