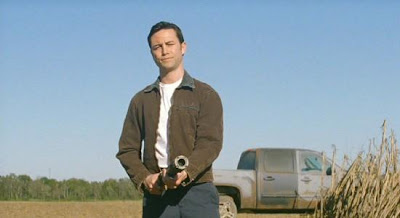 A genre film done right can be a thing of beauty. It may not end up winning a lot of awards, but its balance of craft and entertainment will ensure that it always has an audience. Looper is a great genre film from a young director whose track record is so sound (Rian Johnson's previous films are Brick and The Brothers Bloom) that in time he may prove to be a sleeper candidate for "best of his generation." Looper is a near perfect science fiction/action film, one brimming with intelligence and packed with well-executed action.

Set in 2044, Looper centres on Joe (Joseph Gordon-Levitt), a hitman for the mob of the future. As explained in a voice over that has such a charmingly noirish bent that it feels less like the exposition dump that it actually is, by 2074 time travel has been invented and outlawed. The mob controls the technology and uses it to send its victims back in time, where the bodies can be more easily disposed of. Under the guidance of Abe (Jeff Daniels), who is from 2074 but has been sent back in time to manage the present day hitmen, known as loopers, business is booming. The loopers are paid in silver for each of their hits, save the last one, for which they are paid gold. The last hit is the one which a looper kills his future self, thereby "closing the loop."

Joe's life as a looper consists of relatively little. He does his work, hangs out at a club owned by Abe, does drugs and moons over a showgirl (Piper Parabo). As loops start closing at alarmingly fast rates, he begins to grow concerned, particularly when his best friend, Seth (Paul Dano), allows his future self to escape and is then captured (with Joe's help) and tortured by Abe. Soon it's Joe's turn to close the loop and his own future self (Bruce Willis) escapes, later revealing that in the future a powerful figure known as the Rainmaker has taken over and is ruthlessly getting rid of all the loopers. Future Joe reveals his intention to find and kill the Rainmaker (who, in 2044, is just a child) in order to alter the future and save his wife, who was killed when he was apprehended to be sent back in time. Young Joe, meanwhile, just wants to save himself from Seth's fate and becomes determined to kill Future Joe while trying to dodge Abe's henchmen. To this end he finds himself hiding out on a farm owned by Sara (Emily Blunt), whose young son, Cid, who has powerful telekinetic abilities and who may prove to be the child that Future Joe is after.

Written by Johnson, Looper is a tightly plotted story which manages to incorporate its multitude of ideas into the narrative in a way that doesn't feel too conspicuous. Obviously a film like this requires a bit of exposition in order to establish the "rules" of the future, but there's plenty that the film establishes without going out of its way to explain. The world of 2044 is one post-economic crash, sinking much of society into abject poverty. The economic collapse is an important aspect of the film's mise en scene which Johnson foregrounds or backgrounds as needed, depending on the requirements of the scene. The world that Johnson creates, while obviously fantastical, nevertheless manages to feel authentic and complex as well.

Structurally Looper has two basic movements. The first is a blend of noir and sci fi set in the city, as Joe struggles with a life which is awash with fast disappearing pleasures and the knowledge of his eventual demise. The second, set largely in the country, turns the film into a somewhat more conventional shoot 'em up action movie, but at least the action is well-crafted. The farm scenes, which center largely on the interplay between Gordon-Levitt and Blunt, provide the film with the opportunity for emotional complexity and feature some of the films best scenes, particularly the scenes involving Cid, who proves to be both terrifying and an excellent source of comic relief. One of the film's flaws, however, is that the scenes set on the farm create problems in logic and the film's conclusion creates a paradox that renders the plot moot. Overall the film is entertaining enough that the problems of logic (inherent in pretty much all time travel stories) are easily pushed aside. I mean, sure, Future Joe is apparently an idiot who somehow doesn't realize that he's doing the opposite of what he needs to do to change the future, but it's still a lot of fun watching the film work its way to that point.
Posted by Norma Desmond at 8:00 AM

I have been very curious about this film. It seems like it is such a redundant concept but at the same time I cant think of any movies based on it. Will be a interesting watch.

I think it's definitely a fresh take on old tropes.