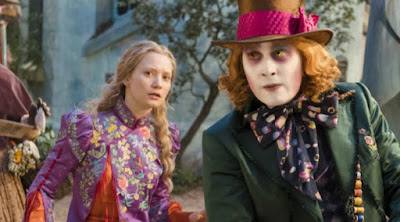 The opposite of love is not hate but indifference, which is exactly the reaction that met Alice Through the Looking Glass, the sequel to 2010's smash hit Alice in Wonderland. The first film made $334 million domestically and a billion dollars world-wide, making it incredibly profitable despite its ridiculous production budget of $200 million. The second film cost marginally less to make (a still not at all reasonable $170 million), but brought in less world-wide than the first film made just domestically. The gulf between the financial success of the first film and the massive failure of the second is almost hard to believe, the result of a perfect storm of things going wrong. Of course, the film could have helped itself by actually being good and having a story to tell that could act as it's second reason for being, the first being the desire to wring just a little more money out of the first film. But, then again, Alice Through the Looking Glass also had the misfortune of coming out during the summer of movie sequels no one wanted, so perhaps it would have failed regardless.

Picking up some years after the events of Alice in Wonderland, Alice Through the Looking Glass finds Alice (Mia Wasikowska) adventuring on the high seas, having taken over as captain of her father's ship the "Wonder." When she returns to London from her latest voyage, she learns that her mother has sold the ship to relieve debts and save their family home, and as she contemplates what she might do to halt this turn of events, Alice is drawn into a magic looking glass which leads her back to Wonderland. On returning, she learns that the Mad Hatter (Johnny Depp) is dying as a result of the trauma of having lost his family to the Jabberwocky and the White Queen (Anne Hathaway) encourages Alice to visit Time (Sacha Baron Cohen) and convince him to save the Hatter's family in the past. When he refuses, Alice gets hold of a time traveling device and tries to alter history herself.

The story that Alice Through the Looking Glass tells isn't great, straining as it does to find an excuse to bring back the characters played by the top-line cast of Alice in Wonderland, including Helena Bonham Carter as the Red Queen, and then struggling to keep them all busy before ending with a deus ex machina and a pat resolution about the importance of family and staying together. While the returning actors bring nothing less to this film than they did to Alice in Wonderland, overall there's no real passion to the film, no sense of why (other than money) anyone felt it needed to be made or what they wanted to say with it. It's neither a terrible film nor a great film, but one that's just sort of there and whose every frame implies that it would be perfectly happy to be the kind of film that's immediately forgotten, just so long as it's consumed first. For all its CGI business, there's nothing especially memorable about Alice Through the Looking Glass, no setpiece that knocks you back, no lines you'll find yourself quoting later. It's big and loud but also kind of boring and after seeing it and giving some thought to its box office failure, the first thing that came to mind was a line from The Simpsons episode "Behind the Laughter," where the narrator describes audience reaction as "Fans reacted... with yawns. Angry yawns," because "disinterest" feels like too soft a word for the outright rejection that this film was met with.

When Alice Through the Looking Glass failed to meet expectations, there were a lot of theories as to why that started to get thrown around: it came out 6 years after the first and too late to capitalize on Alice in Wonderland's success; it retained its major cast but lost its director; it is based on a lesser-known book than Alice in Wonderland, so potential audiences had less of a connection to it going in; and then of course there was Depp's personal life, which imploded just in time for the film's release and included allegations of domestic violence by him against then-wife Amber Heard. All of these things likely played a factor. 6 years was too late to capitalize on the success of Alice in Wonderland, not just because sequels that arrive well after the fact seem to fail more often than they succeed, but also because Alice in Wonderland, despite its incredible success, doesn't appear to be all that fondly remembered now and you can't capitalize on what turns out to be a flash in the pan.

Similarly, the substitution of director Tim Burton for James Bobin probably did have an effect because, even though some of their collaborations have been disappointing, the combination of Burton and Depp is often enough to draw interest and because Burton is a distinctive stylist who, while his vision doesn't necessarily always result in a good movie, can at least be said to have vision in the first place. Bobin, whose previous feature directorial efforts were limited to The Muppets and Muppets Most Wanted, doesn't present a distinct voice or vision here, giving the whole thing the impression of being Burton-lite. The audience's lack of familiarity with Through the Looking Glass was probably also a factor, though I'm not really convinced that it was that much of a factor because the story the film is telling isn't actually the story of Through the Looking Glass; it contains elements of the Lewis Carroll story, but it's ultimately its own thing. As for Depp's personal life, that probably did play a factor because there is, in fact, such thing as bad publicity, but I think you also have to take into account that even before his split with Heard, he was on a downward trend in terms of his popularity, seen as an actor who has moved from taking chances to relying on shtick. The fact that even the new Pirates of the Caribbean film is faltering despite the series being one of the most reliably profitable film properties of the last 15 years would suggest that people are just kind of over Johnny Depp.

Not often mentioned, though I think it's worth mentioning, is that Alice in Wonderland wasn't a summer release. It was released at the beginning of March 2010 and then had basically that entire month to itself, handily winning the box office for three weeks straight until the release of How to Train Your Dragon. Alice Through the Looking Glass had no such luck, released May 27, 2016 against the on-going successes of Captain America: Civil War and The Angry Birds Movie and against a new release in the form of X-Men: Apocalypse. The level of competition, combined with promotional trailers that don't really give you a solid idea of what the film is about (the story is nonsense, though, so what could they really do?), probably doomed the film to failure as much as anything else.

But there could be something else at play, too. If you look at the release slate for the summer of 2016, the number of sequels (and for this purpose I'm counting reboots like Ghostbusters and The Legend of Tarzan, the Ben-Hur remake, and Suicide Squad, since it's part of a shared universe) released amounts to basically one per weekend. Of those 16 films, only 5 are true financial successes (Finding Dory, Captain America: Civil War, and Suicide Squad, plus The Conjuring 2 and The Purge: Election Year, two films that didn't make a lot in box office compared to other summer releases, but made a lot in profit because their production budgets were so low), while a few others are sort of middling successes that broke $100 million at the box office but still ended up being viewed as disappointments, and then a bunch of films that fell short enough of expectations that they can be considered bombs, a group which includes this one. There are so many options for entertainment now, with way more content available than hours in which to watch them, that a studio can't just throw something together and automatically find an audience willing to give it a chance just for something to do. The effort has to be there, because if it's not the audience will drift to some other project where an effort has been made. Alice Through the Looking Glass doesn't present as if it comes from that kind of effort; it smacks of a cynical money grab and audiences were wise to that and stayed away.