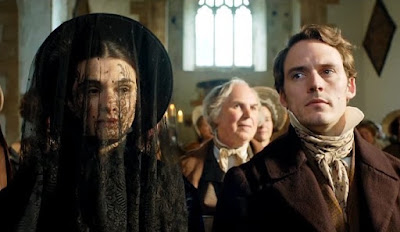 Did she or didn't she? That's the question at the heart of My Cousin Rachel, an adaptation of Daphne du Maurier's novel of the same name. An ambiguous story about a woman who may, but may not, be a fortune hunter of such ruthless determination that even murder is not beyond her, My Cousin Rachel seems like a film that's bound to divide. Fascinating and frustrating in almost equal measure, largely as a result of the airless quality of Roger Michell's direction, it's not a movie that will win over anyone who isn't already inclined to enjoy a handsome period piece. However, if you're a fan of Rachel Weisz (and why wouldn't you be? She's one of the contemporary greats), then this is a must-see because she's truly wonderful here, alternately delightful and sinister, a woman who could conceivably be the vile temptress her reputation suggests or an innocent wrongly accused.

The man at the center of the tale is Philip (Sam Claflin), orphaned as a boy and taken in by his cousin, Ambrose (also played by Sam Claflin), who raises him in a rowdy household dominated by masculine energy (in voiceover Philip notes that the only females allowed in the house were dogs) before sending him away to school to be educated. Shortly after his return, Ambrose himself departs, going to Italy in the hopes that the climate might cure him of the illness that's been plaguing him. While abroad Ambrose encounters his cousin, Rachel (Rachel Weisz), falls in love with her and marries her, and then begins to descend into paranoia, sending letters to Philip full of suspicion about his new wife. By the time Philip arrives in Italy to see things for himself, Ambrose has died and Rachel has left and Philip is certain that she is responsible for his beloved cousin's death. When she turns up in Cornwall shortly after Philip's return, he's determined to get to the bottom of what happened to Ambrose but once he actually meets Rachel, all of his plans and all of his previously formed ideas begin to go by the wayside.

There's a lot of build up to Weisz's arrival on the scene, with the duality of her role in the narrative set up through Ambrose's letters home, which first describe her lovingly and then begin to describe a controlling woman determined to cut off his contact with the outside world and, possibly, kill him, and as a consequence the character takes on a larger than life quality before she even sets foot on the stage. Even the places of her absence - the villa in Italy, the drawing room when Philip returns to his Cornwall manor, having engineered what he believes will be a power play by being out on the estate when Rachel arrives so that she'll be forced to wait for his return in order to sit down to dinner, and he emphasizes to his manservant that she's to wait and wait until such time as he decides to return - are weighted with the idea of her, a presence that precedes her. When he finally does meet her, forced to go up to her room when his bewildered servant explains that she left her regrets but won't be able to join him for dinner, his cool and his resolve immediately abandon him. She charms him, she enchants him, and already he's wrapped around her finger.

Philip falls quickly, deeply in love with Rachel. It's partially a result of his youth - he's inexperienced with women and he's impetuous - and partially a result of the spell she weaves over him without seeming to weave any spell at all. She presents as the picture of innocence, a widow mourning the husband she loved dearly, saying all of the right and proper things at all of the right and proper times, behaving in a way that is above reproach, and yet... there are the terrible tasting teas that she insists Philip drink which she claims contain herbal remedies for his health, and there are the letters she's exchanging with a man in Italy whom Ambrose suspected was in league with her to kill him, and then there's the money issue. Ambrose did not make a new will when he married Rachel, which left Philip as heir to everything in Ambrose's name. After meeting her, Philip insists that Rachel be given a generous allowance and is later told by the trustee of the estate that she's going through it at an exceptionally fast rate. It's impossible that she's spending that much, Philip insists. But, perhaps it's being sent out of the country, the trustee replies. To a man in Italy, perhaps.

Adapted by Michell, the story in My Cousin Rachel is constantly shifting beneath Philip's feet. He suspects her, he believes her, he suspects her, he believes her, and she's obviously guilty and she's obviously innocent. Weisz is, in this respect, the perfect actress for the role as she can play both sides at once, seeming in any given scene like both the cunning temptress and a woman unfairly maligned by gossip and suspicion. She's a figure that you sympathize with as much as you doubt and the performance is the linchpin of the piece. As Philip, the boy who must learn some hard lessons so that he might transition to manhood, Claflin is called upon to do less, but what he does he does well, particularly in that early stretch where Philip builds himself up for a confrontation with the as-yet-unmet Rachel only to immediately fold and became an obedient puppy once he meets her. The performances leave nothing to complain about, but the film's slack pacing does ultimately let it down, draining the suspense and leaving the viewer impatient for the story to get where it needs to go. My Cousin Rachel comes close to being an unqualified success, but in the end it's a partial success at best.
Posted by Norma Desmond at 8:00 AM