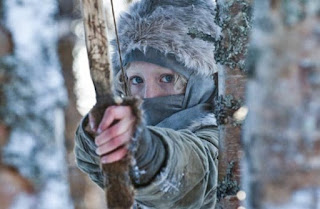 #5: Hanna
I love Hanna. I really do. Saoirse Ronan as a teenage assassin who has been raised in isolation and trained (thoroughly) to defeat anyone who comes for her? Cate Blanchett in sinister mode as the shadowy government figure who wants to capture her? That final showdown in the abandoned theme park? This movie is perfection. #4: Kill Bill, Volumes 1 & 2
Uma Thurman, aka The Bride, aka Black Mamba, aka Beatrix Kiddo. She's got a list of people to kill and none of them are going to go down without a fight, preferably a knock-down, drag-out fight, possibly with swords. She roars, she rampages, and she gets bloody satisfaction. 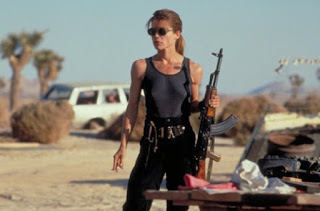 #3: Terminator 2: Judgment Day
This one may be debatable - not because Linda Hamilton's Sarah Connor isn't awesome, but because this is maybe stretching the definition of "female-led." Hamilton is second-billed after Arnold Schwarzenegger and arguably John Connor is the film's protagonist, but John Connor sucks and Sarah Connor is awesome and a list of action movies starring women wouldn't feel complete without this one. 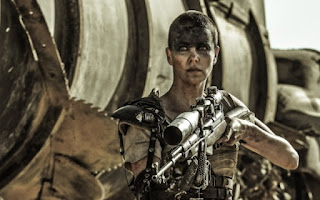 #2: Mad Max: Fury Road
Again, this one is open to debate about the degree to which the female lead is the film's lead. It's called Mad Max, after all, but is it not Furiosa's story? The narrative is driven by her choice to take action (by assisting in the escape of Immortan Joe's sex slaves) and the film's emotional roots are in her past and her experiences, rather than those of Max. Plus, she kills the bad guy and gets to do lots of kick ass stuff. 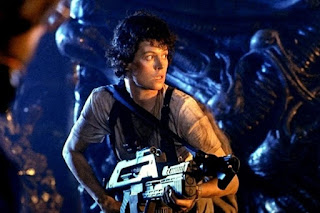 #1: Aliens
Nothing beats Ripley. Not a damn thing.
Posted by Norma Desmond at 8:00 AM

Very apropos to post this list now with Wonder Woman hitting theaters. Nice timing. Without having seen that yet (for another day or two) I love all the movies on this list.

Yeah, it's a bit of a stretch to call Sarah Connor the lead in T2. However, Furiosa is absolutely the protagonist in Fury Road. Max is a sideline character despite having the movie named for him.

Some others I would certainly consider:

Wanted to say that I thought it was a great list....unusual for me that I've seen all of the films on a list!

Salt, The Long Kiss Goodnight, and Haywire were actually all on my long list. I hadn't considered Crouching Tiger, but that would've been a good one, too.