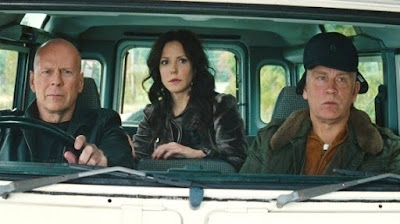 More than any other season, the summer movie slate is zealously geared towards meeting the interests of a couple of particular demographics. Every weekend there will be a new release designed to appeal primarily to men aged 18 - 39 and every couple of weekends there will be a release aimed towards kids (and, by extension, their parents), but there are only a handful of occasions throughout the summer when movies have intended audiences outside of those bubbles. Despite the presence of Bruce Willis, who one might automatically assume has summer movie cred even though historically his films have rarely opened during the summer and the last one that did which he headlined (as opposed to playing second or third lead) and that actually crossed $100 million was 2007's Live Free or Die Hard, Red 2 falls firmly in the category of film whose reason for being can be summed up as "older people like movies, too." It's more action-packed than most movies of its type (which would include, for example, the Exotic Marigold Hotel movies, this year's Going in Style, Last Vegas, or going way back to 2000, Space Cowboys), but it's still very much a movie of its type and not a very successful one, either creatively or financially.

Following up on the events of Red (which was a financial success though, and I think this is important, it was a mid-fall rather than a summer release), Red 2 finds Frank (Willis) happily settled into domesticity with Sarah (Mary-Louise Parker), who is itching to get back into some adventure. The opportunity for adventure presents itself when Marvin (John Malkovich) reveals that they're still being targeted, this time for their participation in an operation called "Nightshade," and the three go on the run while assassins from all over the place, including Victoria (Helen Mirren) and Han Cho-bai (Lee Byung-hun), hunt them down. After making their way to Paris, the trio gets help from Frank's ex-girlfriend, Katja (Catherine Zeta-Jones), which eventually leads them to Dr. Edward Bailey (Anthony Hopkins), who holds the key to the Nightshade business and takes them from London to Moscow and back again with nothing less than the fate of the world hanging in the balance.

The first question you should ask when considering Red 2 is this: is the image of Malkovich made up like Carmen Miranda a solid enough gag to make you genuinely laugh, or is it the kind of lazy, why-the-hell-not that will make you roll your eyes? Because the level of sophistication that went into that gag is about the level that the entire movie is dealing in. Red made money and that means that a sequel was necessary, but this is less Die Hard 2 and more The Whole Ten Yards. Red 2 is a film that's willing to settle for being adequate. Not special, not surprising, not excellent, just adequate. It's done the minimal amount of work to put together a story that gets the surviving characters from the first film back together for a new adventure, but beyond that it's willing to just coast, relying on the charms of its cast to keep the audience interested (which almost works; it's a pretty charming cast generally but Hopkins, in particular, seems like he's having a blast, though Willis is firmly in sleepwalking mode).

This isn't to say that Red 2 is bad, exactly, but more that it doesn't end up justifying its own existence. The germ of the narrative is actually pretty solid (everything from the macguffin to the idea of various assassins being contracted or forced to hunt Frank and Marvin, including Victoria), but the story elements that connect one plot point to another are uninspired, especially the love triangle, of sorts, between Frank, Sarah, and Katja. Also, the main bad guy (Neal McDonough) is functioning throughout with a purpose that isn't entirely clear - he works for the government but he and his people have no qualms about killing other people who are with the government; is he trying to get hold of Nightshade for the actual government or on behalf of some shadow government? Who knows - which makes his motivations, whatever they may be, seem more like a matter of plot convenience than anything else.

All in all, Red 2 is a movie that's just sort of... there. There's a cool scene where Victoria shoots guns out each window of a spinning car but, other than that, there's nothing here that stands out as being memorable. Had it been released in the spring or the early fall, or even in the deadzone of late August, and had it had a production budget more in line with its status as a piece of counter-programming, its disposable nature might have mattered less. Instead it was released smack in the middle of July, trying to recoup a budget of $84 million. The original only made $90 million domestically, so to spend $84 million to make it was just dooming it to failure, even if it had opened at a softer point in the release schedule. But, hey, that's Hollywood's modus operandi: take something successful and repeat until there's no profit left to be made from it. In Red's case, the well might have gone dry after the first entry.


Should It Have Been a Blockbuster?: No, it was destined to be exactly what it is: the kind of movie that plays seemingly every weekend on cable TV and which you half-watch while doing other things
Posted by Norma Desmond at 8:00 AM

It is a charming cast, as you say. And that's about all this movie has going for it. It is indeed a film that's willing to settle for being adequate.