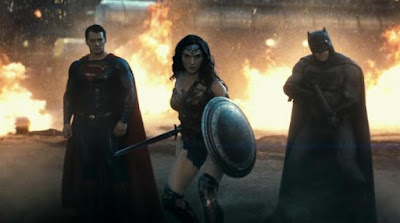 So it's come to this. I liked Wonder Woman so much that I decided to finally check out Batman v Superman: Dawn of Justice so that I could see her first onscreen appearance. That was my mistake and boy did I pay for it. It's not that I didn't expect this movie to be flawed, I had heard and read enough about it to know better than to have very high expectations, but I still didn't expect it to be quite such a ramshackle affair. I'm genuinely baffled - how do you screw something up this horribly? And why, if you're trying to compete with what Marvel is doing, would you sink $250 million into making this before you have a script that functions to tell an actual story? One can only hope that those who need to learned from the mistakes made here, because otherwise Justice League has the potential to be an even bigger mess.

The plot of Batman v Superman: Dawn of Justice, at least as far as I can tell, is something like this: Bruce Wayne (Ben Affleck) is angry about the destruction caused by Superman (Henry Cavill) in his battle with General Zod at the conclusion of Man of Steel and becomes determined to stop him before he can destroy humanity, while Clark Kent has become disturbed by the actions of Batman and becomes determined to stop him. Lex Luthor (Jesse Eisenberg) learns that some kryptonite has been retrieved from the Indian Ocean and, rather than just doing whatever the hell he wants because he's a supervillain, he first tries to import and then weaponize the kryptonite legally by getting the backing of Senator Finch (Holly Hunter), who declines to help him despite her wariness of Superman's powers and his potential to cause harm. After an incident in Nairobi, which has been secretly engineered by Luthor in order to get Superman in the hot seat, Superman is called to appear before the Senate, but things go horribly awry, resulting in Superman having a crisis of faith.

Bruce finds out that Luthor has gotten hold of kryptonite and steals it in order to make his own weapons to combat Superman, discovering in the process that Luthor has created dossiers on other "metahumans," including Diana Prince (Gal Gadot), a woman that Bruce keeps running into. Also, Bruce keeps having dreams which convince him that something big is coming in the future and that he may need to assemble a team to fight it. Before he can do that, though, he needs to fight Superman and because Luthor has decided that he would also like for Batman and Superman to fight, he's kidnapped Martha Kent (Diane Lane) in order to try to force Superman to kill Batman, removing one hero from the world so that Luthor's own creation will then be able to take out the one that remains. But then Superman and Batman become friends, Wonder Woman joins the fray, and the three work together to battle Luthor's creation and save humanity.

To paraphrase a line from the film, the makers of Batman v Superman are so caught up with what a movie featuring Batman and Superman can be, that no one has asked what a movie featuring Batman and Superman should be. Should it be little more than a 151 minute teaser for a future movie? I would like to think that we can all agree that it should not, and yet that's essentially what Batman v Superman turns out to be. It functions to provide set ups for future movies, mostly Justice League but also Wonder Woman, but it's so unfocused and narratively baggy that it doesn't succeed in telling a story of its own. It's not unusual to watch a movie that's over 2 hours and feel like it's too long, but it's not so often that you watch it knowing exactly what could be cut as it unfolds and as I watched this I felt like Homer in the episode of The Simpsons where he coaches Bart's football team: "You're cut... you're cut... you better believe you're cut." In no particular order, here are all the things I think you could lose from this movie to make it a less punishing watch:


* Batman's origin. On the one hand it's sort of funny, given how often superhero origins are tinkered with and altered, that filmmakers remain slavishly devoted to the story of how Bruce Wayne became Batman. On the other hand, we know. We know. There are people who aren't even born yet who already know that Bruce saw his parents gunned down and know why he chose the bat as his symbol. We can safely proceed from a place that assumes everyone watching a Batman movie is aware of the origin.

* the couple of minutes involving "Granny's Peach Tea." This adds nothing to the movie and, as far as I can tell, only exists to debase a character who (spoiler?) will be killed in a second anyway.

* the scene where the kryptonite is found on the beach. Just let Lex explain how he got hold of it through dialogue.

* the scenes where Bruce works out, howling in manly aggression.

* Lois throwing the kryptonite spear into a pool of water for some reason, then somehow realizing that it will be needed to defeat the bad guy and going after it, then almost drowning like an idiot.

* Bruce's dream sequences. The point has already been made, by him and by Senator Finch, about why Superman is possibly someone to be feared, and instead of the dreams informing Bruce's fear of what's to come as a form of prophesy, couldn't you connect the big, bad thing that's on the way to Luthor and have Bruce find out about it when he raids Luthor's office and steals his files?

* Lois' adventure overseas. I get that this is supposedly the catalyst that gets the story in motion but... is it even? Here are the only two things it actually accomplishes: it kicks off a storyline that gets abandoned mid-way through the movie and it puts Lois in "damsel in distress" mode for the first of three goddamn times. Yes, the plot point results in Superman being brought before the Senate, but why not just use the events at the end of Man of Steel, which resulted in the deaths of hundreds of Americans, as the reason for Superman being brought before the Senate?

* But, also, why is the Senate hearing stuff even necessary at all? The idea of it drives the story for its first third and then stops abruptly while the movie carries on without it. It exists to give Superman his crisis of faith but, again, why couldn't the events at the end of Man of Steel have accomplished that?

* every scene involving Diana Prince, with one exception, prior to the big battle. Until the big fight, the only purpose Diana serves in the film is to be the point-of-view character when the videos of Aquaman, Flash, and Cyborg are seen. This stops the movie dead for a minute and, setting up Justice League or not, has no business being in the movie proper. The video clips/teasers are the kinds of things you put in an after credits sequence or save as a DVD extra, and other than doing this one thing her only job for the first two-thirds of the film is to pop up for a few scenes and seem conflicted over whether or not she's going to help. I would keep the quick scene of Bruce seeing the video of Diana and learning that she's a "metahuman," but make that the tease before she literally leaps into battle in the third act.

If you took all of that out, it would result in a leaner and meaner hour and forty-five to two hour movie that might feel more like a piece of entertainment and less like a chore. There would still be an issue regarding the tone because director Zack Snyder is perversely determined to remove all possibly joy from superhero movies, but it would tell a coherent story with a sense of narrative urgency rather than the deflation of tension that occurs with the near-constant diversions away from the main thread into a bunch of subthreads that won't pay off for another couple of movies. Batman v Superman plays out like its makers want to have a shared universe but either don't want to do the work of building it up or don't understand how to bring the pieces together in a way that doesn't leave the audience feeling as if it's been given an appetizer but denied a main course.

Marvel's success changed the game not just in terms of superhero movies but tentpole, would-be franchises generally, but studios that are trying to emulate that success don't seem to understand what makes Marvel's movies work in the first place. The movies leading up to The Avengers don't exist as glorified commercials for The Avengers but as standalone works that can be enjoyed in and of themselves and which have a sense of purpose as individual stories. Taken as a whole the movies build on each other, but each works on its own before it works as part of a greater super-project. Batman v Superman gets so caught up in setting up other, future things, that it's unable to tell a cohesive and compelling story that works all on its own. A movie featuring Superman, Batman, and Wonder Woman together for the first time should be a slam dunk, but Snyder and the rest of the creative team behind the DC movies just can't get out of their own way enough to let this movie be a movie.
Posted by Norma Desmond at 8:00 AM