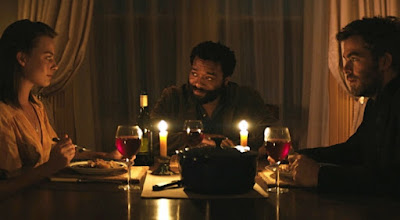 I've never read the novel Z for Zachariah but I imagine that if I had, I would have been dumbfounded by the film adaptation, which diverges so sharply from the plot of the novel that it almost seems like an "in name only" adaptation. The film appears to have borrowed the premise of the book in order to tell a completely different story, one which is at times quietly captivating but ultimately a little disappointing, and now that I know what the novel's plot was, I would really like to have seen that movie instead. None of this is the fault of the cast, who all do very good work here, but the original story sounds a lot more psychologically fascinating than the post-apocalyptic love triangle that the movie, whose screenplay appeared in the 2009 edition of the Black List alongside such big-ticket screenplays as The Social Network and The King's Speech (but also, somehow, That's My Boy), relies on.

Z for Zachariah begins as the story of Ann (Margot Robbie), potentially the last survivor of a nuclear war as a result of living on a pocket of land that is naturally sheltered from the radioactivity that contaminates the rest of the Earth. She lives alone on her family's farm, the other members of her family having gone out in search of other survivors and never returned, sustained by what she can grow, the few animals that she has, the uncontaminated water in a lake, and the goods that remain in a gas station just down the road. One day she encounters another survivor, John Loomis (Chiwetel Ejiofor), who is making his way across the country in a radiation suit. Although she's wary, she reveals herself to him after he realizes that the area is free of radiation and removes his suit but then takes a dip in a body of water that is contaminated and becomes sick. Ann nurses him back to health and Loomis uses his knowledge as an engineer to help her fix some of the machines on the farm and come up with a plan to use the contaminated body of water to create hydroelectric power, regaining electricity and hopefully making it easier to survive the winter to come. As the months pass they grow closer, but then a third survivor, Caleb (Chris Pine), arrives and brings with him new kinds of tension.

Z for Zachariah begins in an intriguing enough way, largely because of its focus on a female protagonist, which is something that you don't see a lot of in post-apocalyptic stories, which usually tend to be tales of brave and capable men surviving in the ruins of society. How Ann manages on her own and keeps herself going is interesting enough, and there's something very real about the way that she would be excited when Loomis arrives on the scene, confirming that there are still other people out there, but also too scared to reveal herself to him. He represents both a threat and a hope to her and the moment when she overcomes her fear of him, driven by her greater fear for him when she sees that he's contaminating himself, is one of the film's most compelling moments. Moreover, what happens after she begins to get to know Loomis is interesting, as she must reconcile her own values to his (she's religious, he's a scientist, and he wants to tear down the nearby church for his hydroelectric project) and also discovers a dark side to him that comes out when he gets drunk. In that moment the vague threat he represented when she first saw him (of violence in general and sexual violence in particular) becomes a real possibility, and in the aftermath she has to ask herself what she's willing to put up with in order to not be alone again.

Where the film begins to falter is its shift from Ann's perspective to that Loomis. It doesn't take long from the point of his arrival for this to stop being Ann's story and starts being his, the focus turning increasingly to his emotional state and pushing hers off to the periphery so that when Caleb arrives and, inevitably, begins to form an attachment with Ann, it's seen largely through Loomis' eyes and from his point-of-view. So thoroughly does Ann transition from subject to object once Caleb arrives that there's a scene where the two men are hunting and decide to make a wager on who can catch the turkey they've been tracking and when Loomis asks what the stakes should be, Caleb suggests that the victor gets Ann (and then he says he's just kidding but c'mon; from this point forward the love triangle becomes defined less by each man's desire for Ann and more by the dick measuring contest they're determined to engage in). Because of this, the film gets increasingly less interesting as it goes on, moving as it does from being a story rooted in the perspective of the kind of character who doesn't often get the point-of-view in these kinds of films to being a much more conventional story about sex, frustration, and jealousy rooted in the perspective of the scorned man (though that does provide Loomis with the opportunity to self-pityingly declare that he'll step aside so that Ann and Caleb can "be white people together," which was sort of hilarious).

All of this taken on its own ends up making the film mildly disappointing and that feeling only becomes amplified if you know the plot of the book. In the book there is no Caleb and the story is all about Ann and Loomis and a relationship that becomes increasingly defined by dominance and abuse. While there's certainly an argument to be made that the cinematic landscape doesn't actually need another movie about a woman being victimized, a story about a woman who is getting by on her own in the post-apocalyptic world only to have a man show up, decide that he'll be in charge and start taking everything over, using his physical strength as well as the imbalance of power implicit in their age difference (in the book Ann is only 16) to control her and the circumstances of their relationship and leaving her to either break and decide that she can live with the abuse if it means not being alone again or find the strength to leave and venture out on her own, just sounds a lot more thought-provoking (even though such a story might end up giving The Road a run for its money in terms of how depressing it would be) than what Z for Zachariah ends up being. The Loomis character would be more interesting in that story and Ann would have more agency, unlike here where her fate ends up being decided by the two men in her orbit.

All that being said, Z for Zachariah is not a bad movie. It's a fine movie that has hits some genuinely resonant notes, particularly in its exploration of how Ann and Loomis come together out of necessity and perhaps develop idealized visions of what the other can be and how they can be together, only to have their illusions about each other taken away (Loomis has difficulty understanding Ann's attachment to the church in terms of her reluctance to tear it down in order to use its materials to build the hydroelectric system that will help sustain them during the winter; Ann is taken aback by the dark side that Loomis shows when he has too much to drink), making them realize how incompatible they would be if they weren't the last two people on earth. Eijiofor is always good and this film is no exception and Robbie gives her best performance to date as Ann, while Pine, as the interloping Caleb, brings a heady mix of charm and menace to his performance that perfectly suits the way his arrival completely upends the established dynamic. It's a film worth watching for these and other reasons, but so diligently conventional that it might not be worth revisiting afterwards.
Posted by Norma Desmond at 8:00 AM