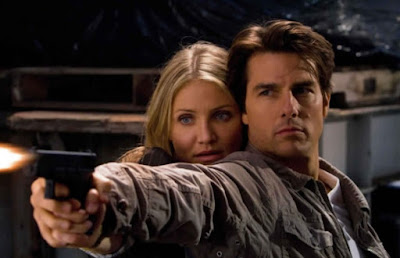 For the most part, the films that I've looked at for this series have ended up being films that deserved their fate as failed would-be blockbusters. Every once in a while I'll come across a hidden gem whose failure might be chalked up to bad marketing or to being too far ahead of the cultural curve to connect with audiences, a film where the lack of box office is in no way a true reflection of its quality, but for the most part these films are lazy comedies, badly conceived action movies, or half-assed comic book adaptations and sequels. Knight & Day, a film that seems to be perpetually playing on TV the last couple of years, turns out to be one of the gems. I'm not saying that it's a great movie - it's a pretty silly movie, in fact - but it's a solidly entertaining one which reminds you just why it is Tom Cruise had such a long and sustained career as a blockbuster leading man.

Knight & Day has a pretty basic set up: there's a mysterious man, a guileless woman, and an object that a bunch of nefarious people are after. The guy is Roy (Cruise), the woman is June (Cameron Diaz), and they meet in an airport when they literally run into each other; the object is a perpetual energy battery known as Zephyr, which is strong enough to power an entire town. Roy is being chased by various people who want the Zephyr, including the CIA (for which he worked before going rogue), and June gets caught in the middle - albeit not for lack of trying to get out of the middle of it. Convinced that she's safer with Roy than without him until everything gets sorted out, June is brought along on an adventure that bounces her around various locales in the USA to an island in the Pacific to Austria to Spain while Roy does his best to assure her that he's got everything under control and that she has nothing to worry about as long as she stays close and does what he says.

With its mix of comedy, romance, mystery, and action, Knight & Day aspires to be a fun caper in the manner of the classic Charade, though in reality it's more in line with less beloved and more recent films like The Tourist (a film which I actually liked, so that's not an insult) and Mr. & Mrs. Smith (with the caveat that Knight & Day's female lead has much less agency than Angelina Jolie's Mrs. Smith and only gets to spend a small portion of the film on anything resembling equal footing with Cruise's character). It's dumb fun, but it's definitely fun and I say that in spite of the fact that the film leans heavily into a very myopic notion of the usefulness of "the girl" in a story like this. June's function, mostly, is to panic, run, scream, and get herself into situations that Roy will have to extricate her from. Jolie was the star of both The Tourist and Mr. & Mrs. Smith and it's impossible to imagine her playing a character like June whose role, for much of the film, is to be in the way, to be the thing that makes it just slightly more difficult for Roy to get his job done. Diaz, though, is capable of exuding a much lighter presence onscreen, of playing a character who is believably passive and finding the right comic notes in the damsel in distress persona to make the character seem grounded and human rather than contrived for the purpose of underscoring Roy's heroism, and June's gradual discovery of what she's capable of in the right circumstances (and Diaz's ability to seem just as at home playing June as capable as she is at playing her as desperately out of her depth) is a delight.

But it's Cruise, ultimately, who carries the show. It's easy to forget now, when the only genuine hits of Cruise's output over the last decade are entries in the Mission Impossible series (and especially right now, when The Mummy is doing little to support Cruise's box office bona fides), that Cruise is one of the most financially successful leading men of his generation (second, perhaps, only to Tom Hanks). With the exception of Magnolia and Eyes Wide Shut, which I'm not sure anyone would have expected to be major money makers, Cruise had nothing but $100 million hits from 1992 until 2006. That's 12 movies over the course of 14 years that broke the $100 million barrier, including Vanilla Sky and Collateral, two films that almost certainly (regardless of quality) would never have come close to that box office take without Cruise's presence in them. There's a reason for that and it's that Cruise is very much a Hollywood leading man in that classical sense where his innate charisma, his comfortable screen persona, just draws you into the world of the film and makes it work. Cruise is incredibly likable here, giving a relaxed performance that makes it all look so easy, shifting back and forth between charming comedy and the intense focus required for the action setpieces.

And, of course, that's the irony of Knight & Day, that it succeeds as a film in large part on the strength of Cruise's movie star power, but that it failed at the box office, in all likelihood, as a result of a shift in the public's perception of Cruise as a movie star. The sudden drop in Cruise's success rate as an actor is often credited to his appearance on Oprah, jumping up on a couch and declaring his love for Katie Holmes. Certainly that was part of it, along with an increasing outspokenness about some of his beliefs as a Scientologist (particularly his beliefs about mental health issues and treatment), and a rise in stories about his personal life that, at one time, would probably have seemed too outlandish to gain traction (such as stories about Scientology's management auditioning and then choosing girlfriends for him) but over time have become accepted beliefs of the "that sounds strange, but I think it might be true" variety. Around about 2005 the public began to see Cruise less as a movie star and more as a Hollywood weirdo and (outside of the Mission Impossible movies) the struggle for his films since 2005 to make money domestically is reflective of the fact that people started to become less interested in his work and more morbidly fascinated by the tabloid aspects of his life. Incidentally, in 2004 Cruise fired Pat Kingsley, his publicist since 1992 (which means she helped shaped his public image for 12 of the 14 years of his greatest success), and hired his sister to take her place. So Cruise was maybe always a Hollywood weirdo, but had someone there to keep that aspect of his personality more under wraps, and without her watched his reputation and career go into a dive from which it still hadn't recovered by 2010, when Knight & Day came out, released at one of the times of the year when Cruise's films could traditionally expect to deliver.

Now, you could argue that a film that makes $76 million domestically didn't do too terribly, that while it's not a monster hit, it had some modest success, but to do so you would have to ignore that the film came with a $117 million production budget. That's a big shortfall, especially when you factor in that the worldwide gross only came to $261 million. For the sake of context, not only does that fail at the "production budget x 3" formula by just about $100 million, it also means that Knight & Day brought in less worldwide than Oblivion and Edge of Tomorrow, two other recent Cruise films that are considered box office disappointments, as well as The Mummy, which is already being written about as one of the biggest box office bombs of this summer. That reduces Knight & Day to a footnote in an era of Cruise's career that is already seen as a diminished one, which is a damn shame because it actually is an entertaining movie. Cruise is in top form, Diaz does a lot with a character that, frankly, probably could have been played by anyone, the two are great together, the action scenes are inventive and largely well-conceived (the only exception, to my mind, is the addition of running bulls to a car chase in Spain, though maybe those CGI bulls looked better in 2010 than they do in 2017), and director James Mangold does a great job at balancing the tone to keep things light and airy. This is a film that deserved a better reception than it received.

Should It Have Been a Blockbuster?: Yes! It's a fun watch
Posted by Norma Desmond at 8:00 AM

i agree! It was a fun movie, just pure escapism. I didn't love it, but it was very watchable.

Exactly. It's a great mindless entertainment.