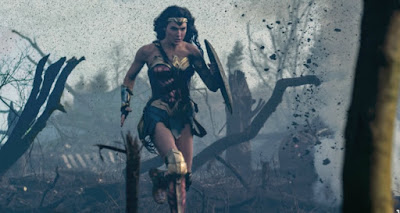 Twice in Wonder Woman the point is made that it isn't a question of "deserve." To that end, I'm not sure if this is a film that the world of today deserves, but I think it's one that the world of today needs. That might sound hyperbolic, it's just a movie after all, but a movie is rarely ever "just" a movie and the messaging of this one feels particularly urgent right now. It's not the gender issue of this being a film with a female lead or in this being a major blockbuster release directed by a woman that makes it so, nor is it the inherent relief in there finally being an unqualified success in the DC shared universe (if only to stop some of the repetitive debate about DC vs. Marvel). The issue and the message is more expansive than that, more inclusive, and deeply humane. It's not about deserve. It's about what you believe.

Wonder Woman starts well, side-stepping the trap that a lot of superhero movies fall into by dispatching its origin story in a way that's quick and efficient, but also visually arresting. Here, young Diana (Lilly Aspel) is told of the origins of mankind and the Amazons by her mother, the Amazon Queen Hippolyta (Connie Nielsen), in the form of a bedtime story, the image of the painting they're looking at coming to life along with the telling. Told that the Amazons were created to protect man from the god Ares, Diana wants nothing more than to begin her training as a warrior immediately, but Hippolyta is reluctant. Her sister, Antiope (Robin Wright), has other ideas and begins working with Diana in secret and then later with Hippolyta's permission, but on the understanding that Diana must not learn the truth about her power, lest it draw Ares to her.

Many years later Diana instead finds herself being drawn to Ares after Steve Trevor (Chris Pine), an American pilot and spy, crash lands near the hidden shores of Themyscira, followed shortly thereafter by the Germans who have been chasing him. In the aftermath of the battle that ensures between the Germans with their guns and the Amazons with their bows and arrows and spears, Steve tells the Amazons of the "war to end all wars" and, though her mother forbids it, Diana decides that it's her obligation to go with Steve, believing that she will find Ares wherever the fighting is the fiercest and that by defeating him, she will release mankind from his thrall.

Wonder Woman does a lot of things right, starting with how it treats its protagonist. Diana is innocent, insofar as her frame of reference has been limited by her lack of exposure to the world outside of Themyscira, but the film avoids the "born sexy yesterday" trope. It does this primarily by telling the film from her point of view, understanding her curiosity for what it is and acknowledging that while she might not know some things, she knows other things instead, and then by exploring her relationship with Steve in such a way that the balance of power is never such that she's submissive to him. She doesn't need him to be her protector and his few early attempts to play that role essentially end with her pushing him aside and saying "No thanks," and while she's never met or even seen a man before Steve shows up, she's not naive about the matter of sex as evidenced by the hilarious and surprisingly frank conversation she has with Steve in which she informs him that "men aren't necessary for pleasure." The point is that although she has things to learn about how to get by in the wider world, Steve is not cast in the role of her "teacher" and she's never framed as a passive figure in her interactions with him.

The strength of the character comes both from Patty Jenkins' direction, which eschews the male-gaze aspects that tend to accompany female superheroes, depicting Diana less like a sex object and more like an athlete, celebrating her muscularity and the power of her body; and from Gadot, who gives the character a pitch perfect blend of guilelessness and toughness, making her both formidable and funny. Gadot's performance is great (the same can be said of Pine), approaching the material with a sincerity that is straight forward but not without nuance. When she leaves Themyscira, she enters the world with a black and white understanding of good and bad, but as the story progresses she learns that things aren't quite that simple. For example, she understands Steve to be on the side of "good" but learns later, in conversation with Chief (Eugene Brave Rock), a war profiteer who joins the crew Steve puts together to help Diana, that his "people" haven't always been the good guys and have historically been just as capable of violence as the men on the other side of the current battlefield. Even more importantly, she enters the fray in WWI believing that all she has to do is defeat Ares and the violence will stop and is shaken when she realizes that people don't need to be manipulated by the gods to give in to their worst and most selfish impulses.

That revelation is at the heart of Wonder Woman, not just challenging Diana's notions of what she owes to humanity and her certainty that she ought to help them, but also containing the film's most powerful message. Diana's final words on the subject are about the power and necessity of love, which in a vacuum may sound trite but in context doesn't feel that way because of the emotional journey she's just taken and the lessons that she has just learned. She thought that making the world a better place would be as simple as killing Ares, but you can't kill your way to a better world. You can only meet the worst the world has to offer with the best you can find in yourself and try to balance out the darkness with light. That's the attitude that Wonder Woman adopts and the note that resonates as it closes its story. It's earnest, but it's absolutely earned by this greatly entertaining movie.
Posted by Norma Desmond at 8:00 AM

This is a very well done film, especially in regards to how Diana is depicted. I would add something to your assessment, though. Not only is it important she never becomes submissive to Steve, it's just as important he never becomes submissive to her. It shows that she maintains the ability to be a strong person even when dealing with strong people, not just with weak men. Great post.

That's a great point. Steve defers to her once he realizes that she has superior abilities, but that doesn't mean that he's not strong in his own right. He's quite worthy of saving the day while she saves the world.