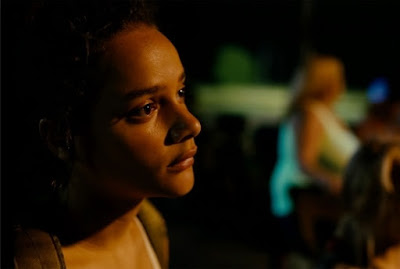 A van full of kids in their teens and early twenties flies by. They're as energetic as they are seedy looking, a roving band of young people who have no option except to keep moving and hustling for scraps. To most, they look like they've reached a dead end before they've even had a chance to start in life. To her, they look like freedom. Despite this, Andrea Arnold's American Honey is not a romanticized vision of poverty; it's gritty and clear-eyed and alive to the complexities of a person's relationship to his or her circumstances, even when those circumstances are bad. It's a good movie, if not necessarily a great one (trim about 30 minutes from its 163 minute running time and it might be), and it's built around what will hopefully be a star-making performance from Sasha Lane, who captivates in the leading role.

Lane is Star, an Oklahoma teenager introduced dumpster diving alongside two small children. Her exact relationship to the children isn't clear, they might be half-siblings and Star's brief interaction with their father, which quickly becomes a heartbreaking vignette of a young woman trapped in an abusive situation, seems at first to confirm that, though her interaction with the children's mother throws it back into ambiguity. While out with the kids she meets Jake (Shia LaBeouf), who invites her to come to Kansas with him. Though she knows nothing about him or what he has to offer, she knows that it's more than she can hope to get out of her current situation, so she packs up the kids and takes them to their mother, who is not just reluctant but openly hostile to the idea of caring for them, and then hops in the van to embark on a new adventure.

In going with Jake, Star becomes part of a crew of young people who sell magazine subscriptions door-to-door under the management of Krystal (Riley Keough, taking no prisoners) and enters into a relationship with Jake that is volatile and escapes definition. Star has come along for the ride expecting to have... something with Jake and instead finds that he's with Krystal, sort of (he's her right hand man in business and seemingly at her sexual beck and call), and that many of the things he's done which have made her feel special are things that he's done for other girls who are in the crew. Her resentment of the attention that he pays to other women is instant and intense and not without some encouragement on his part, as he's constantly drawing her in and then pushing her back, jealously staking his claim any time another man shows interest but then keeping her at arm's length, sleeping with her but then casually informing her that Krystal doesn't allow members of the crew to get romantically involved. Being around him messes with her head, but hers is an existence full of contradiction.

As conceived by Arnold and portrayed by Lane, Star is at once entitled and bratty, capable of torpedoing her partner's sales pitch because she doesn't care for his fibs, but also exceedingly generous, willing to give away whatever little she has to someone else; she's fearless, ready to head off for any adventure at a moment's notice without giving it much thought, but also acutely vulnerable, becoming almost child-like when faced with danger; she's street smart, capable of fending for herself and getting by with nothing more than the clothes on her back, but she's also prone to taking dumb, dangerous risks and only realizing once it's too late (if she realizes it at all) how naive she's been. Despite these disparities, Star never feels like an inconsistent character. She's still a kid and as such she has a certain level of guilelessness and is given to impulsive decisions despite the ways that life has hardened her. Like the star of one of Arnold's previous films, Fish Tank, Lane is a first-time actor discovered on the street (much of American Honey's cast was discovered that way) and Arnold's instincts for casting once again prove to be magnificent. Lane is a charismatic performer who is able to give the character a lot of nuance and she holds the center of the narrative with ease.

Together Arnold and Lane make Star a character worth following as she sets out into the unknown, though ultimately I think American Honey is too long for what it's trying to do and could have told its story just a little more succinctly. Still, I have to give Arnold credit for the fact that she tackles a subject like poverty in a way that doesn't romanticize it, even though it easily could as the backbone of the narrative is this sort of adventure story of Star slipping out of one life for the promise of a whole other life. The life these kids lead never looks anything less than hard, no matter how happy and upbeat they try to seem, and full points to costume and make up for making them look appropriately squalid (there are times when it feels like you could probably smell them through the screen if you tried). There's a grittiness to Arnold's vision that feels more honest than a lot of films that depict poverty and what she shows on screen is a version of America that isn't often seen. It may ramble a bit, but when American Honey is on point it's an unblinking look at what typically gets looked away from.
Posted by Norma Desmond at 12:20 PM