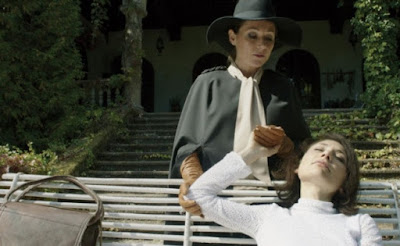 Peter Strickland’s The Duke of Burgundy sounds lurid, but is actually quite thoughtful. It begins by presenting itself as a titillating story about a rich woman who takes pleasure in humiliating her maid and setting her up for failure so that she can punish her in sexualized ways, and then gradually reveals itself to be a rather funny story of how a relationship can be undone by selfishness, passive aggression, and taking the other person for granted. It is one of the most delightful cinematic bait and switches I’ve ever seen, in addition to being one of the most beautiful. Inspired by European softcore films from the 1970s, The Duke of Burgundy is a film with style to burn, but the enchanting visuals merely rest on the surface of a deep and fascinating work of psychological complexity that rewards multiple viewings.

The two women at the center of the story are Cynthia (a brilliant Sidse Babett Knudsen) and Evelyn (Chiara D’Anna), who are introduced as employer and employee. Later they’re revealed to be lovers who engage in a role playing scenario built around dominance and submission that has been painstakingly planned out by Evelyn, who is so in control of what is happening that she’s even plotted out what Cynthia will say and written it down on index cards for her to memorize. Cynthia dutifully obliges with what Evelyn desires, donning a wig, slipping into lingerie, and taking on the persona of a chilly authoritarian, even though much of what Evelyn wants is beyond her own comfort level and outside of her own desire.

The difference between what Evelyn wants and what Cynthia wants gradually begins to chip away at the core of the relationship, particularly since Cynthia is willing to try to meet Evelyn’s needs while Evelyn is much less willing to meet Cynthia’s and becomes frustrated when Cynthia fails to meet her expectations and starts looking elsewhere. As the relationship falters but the two try to keep it together, one of the more intriguing questions the film asks is how the wounded party can retaliate against betrayal in the context of a relationship where punishment is so firmly tied to pleasure.

Though the film turns around the pleasure and anxiety that is borne out of sexual role play, and though Strickland unfolds scenes through shots that are charged with the energy of erotic possibility, The Duke of Burgundy is built more on the power of suggestion than the power of explicit images. In truth it’s a very discrete film is terms of what it actually shows, its interest not in sex so much as in power dynamics in an intimate relationship, how routine can engender boredom, and in the need for compromise and empathy in order to sustain a long-term relationship. While the film is highly specific in terms of the world it presents (the world of the story is one without men or cars, where everyone rides around on bikes and attends lepidopterology lectures and one’s collection of moth and butterfly specimens can be used as currency, and where a BDSM relationship isn’t treated like a kink), it’s also grounded in things that are relatable. The sentence “It would be nice if you did it without having to be asked” can be uttered in any context in any relationship, and every long-term relationship is likely marked by moments when one partner grows frustrated at the expectation that they’re supposed to just be able to read the other’s mind or, conversely, when one partner grows frustrated by the other’s inability to anticipate a particular need even after years and multiple instances of having voiced that need. Though it takes the sexual relationship between the two women as its starting point, The Duke of Burgundy is much more concerned with emotional intimacy and sustaining desire over a long period of time than it is with sex itself.

In putting the film together, Strickland has carefully calibrated the elements of the story for maximum impact. Though it might seem like Strickland is being deliberately provocative by making the two characters women, the choice isn’t a salacious one. Instead, it makes it possible for Strickland to remove the burden of naturalized gender norms and power dynamics from the narrative, clearing away the need to either play into or undermine expectations and allowing him to sharpen his focus until it’s just a story about how people relate to each other. Power isn’t gendered here, which allows Strickland greater freedom to explore how power is expressed between two people based on their individual personalities rather than the expectations that derive from what is popularly considered “masculine” or “feminine” behavior.

Though Strickland doesn’t provide anything in the way of backstory or too much in the way of greater context (there are other characters who pop up for a scene or two but for the most part the film is just Cynthia and Evelyn in their house), he’s able to play around with the subtleties of the interactions between Evelyn and Cynthia in this one aspect of their relationship in order to draw in the dimensions of the rest of it. The relationship is characterized as a genuinely loving one, but there are also times when the two are really irritated with each other, with the way that the other’s needs are at odds with her own, or with the demands being made of her, or with the way that things don’t quite go the way she wanted them to; the dynamic is always shifting and Strickland is able to navigate that in a way that the tone in any given scene can move from drama to comedy and back without any apparent effort as he finds the humor that hovers just to the left of the tensions growing between the couple. Without being in any way self-serious about it, The Duke of Burgundy builds its way to becoming a piercing examination of how people who want to be together can still struggle to actually achieve being together, and it's that universality at the core that makes the film so affecting and ensures that it will the sort of the film that will stand the test of time.
Posted by Norma Desmond at 11:55 AM