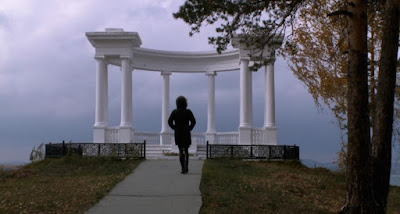 Here's the premise: there's a city that is closed to outsiders and has, historically, been kept off of maps by the government. For generations people have lived and worked inside of its enclosures, their work (and lives) a carefully guarded state secret. For decades they were provided access to goods and amenities that the people living outside the city could only dream of, the only downside being that they're all basically guaranteed to either end up with cancer themselves or to lose most of their family to same. It sounds like science fiction. It's the reality of the place codenamed "City 40," home of the Soviet nuclear weapons programme since 1945 and only designated as a town, and granted the name "Ozyorsk," in 1994, though it remains closed to this day. It's a place that non-residents can only enter with special permission from Russia's secret police, and in which filming is prohibited. But, where there's a will, there's a way, as Samira Goetschel's documentary City 40 proves.

To tell the story of City 40, Goetschel mixes archival footage, interviews with residents of Ozyorsk (some of whom either have their faces blurred or keep their backs to the camera, for fear of reprisal), and footage filmed in secret which shows some of the daily life in a city that is part of one of the most contaminated regions on earth thanks to its production of weapons-grade plutonium and the dumping of nuclear waste into nearby lakes and rivers. Founded during the Cold War and in the earliest days of the nuclear arms race, City 40's existence was kept secret during the Soviet era, its presence not included on any maps, its citizens erased from the census. During the first eight years of its history, its inhabitants were not allowed any contact with the outside world, their families left to believe that they had simply "disappeared," which probably wasn't so unusual an occurrence in the Soviet Union anyway. After that citizens were allowed passes out of the city to visit friends and loved ones but were strictly forbidden to reveal anything about their actual location.

Despite living under such close scrutiny, the people of City 40 continue to choose not to leave and most seem to see themselves as fortunate because of all the things they have had, including plenty of food at times when it was scarce throughout the rest of the country, which people outside of their city's limits have had to go without. The trade off is that for generations they've been exposed to radiation which has made many people sick and resulted in a graveyard full of people who didn't live past childhood and adolescence. The way that the people of Ozyorsk negotiate these facts are interesting, as many are seemingly content to pretend that it's no big deal to live in such a polluted area, while one woman, Nadezhda Kutepova, has set up shop as a human rights activist advocating for the rights of the people not to be exposed to radiation and to open up the city and bring the reality of the situation there to light. In a place that is defined by its secrecy, where secrecy has been ingrained in its citizens from birth, hers is a dangerous proposition.

Told in a brisk 73 minutes, City 40 can't be said to be the most in depth of documentaries, but it is nevertheless intriguing. The bargain that the people of Ozyorsk have made seems unfathomable - particularly since it no longer seems to be the case that they enjoy special amenities unknown to people outside the city's barbed wired limits, with government cuts making it so that even the street rinsing/cleaning that was once a daily occurrence and one of the few nods towards "safety" no longer happens at all - with Kutepova, driven by the worry about her own children's health and the notion that they could grow up and have children with other people who grew up in Ozyorsk and that those children would have even more severe health troubles, being seemingly the only person who actually wants to change things (or, at least, the only person who actively wants things to change and is willing to appear on camera).

That said, while City 40 is interesting enough just for how mind-boggling it is that people would knowingly and willingly live in and around nuclear waste, I can't help but think that a documentary about just how Goetschel managed to get herself and her camera smuggled into and then back out of Ozyorsk would make for a much more interesting film. And almost certainly a film that spent more time with Kutepova, one of those people who seems to come along once in a generation and possesses enough bravery for everyone around her, and included her fate after Goetschel's departure, which is only addressed here in a title card towards the end of the film, would have been an undeniably compelling and powerful David vs. Goliath type story. But, still, City 40 is worth seeing, if only because the only way you'd actually believe this story is to see it.
Posted by Norma Desmond at 8:00 AM