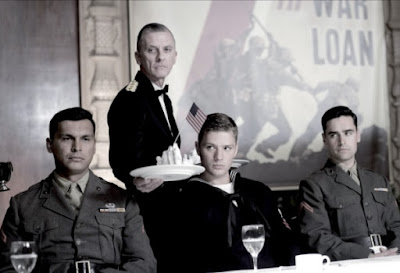 Few filmmakers have been as tireless as Clint Eastwood, having directed 35 feature films in the last 45 years and easily qualifying as having made one of the most successful transitions from actor to director. In that time he's made some great movies, but he's never been as ambitious as he was when he decided to tackle the story of the Battle of Iwo Jima over the course of two films in order to explore the perspective from each side of the conflict. At the time of its production Flags of Our Fathers must have seemed like a sure thing - so sure that the studio was willing to shell out the extra money to make Letters from Iwo Jima even though that film, regardless of quality, was bound to lose money in the domestic market by virtue of not being in English and not being about the American side of the conflict - a film that would hit that sweet spot where prestige meets profit. Yet when all was said and done, Flags of Our Fathers only ended up with 2 Oscar nominations (to Letters from Iwo Jima's 4) and would fail rather badly at the box office, bringing in only $33 million domestically and $65 million worldwide against a budget of $90 million and becoming one of Eastwood's least financially successful films as a director. In hindsight, it's easy to understand why that happened; although it has some of the hallmarks of the patriotism stirring, "rah rah" kind of war movie, it's doing something a lot more complicated than that and a lot more critical.


The Story
Flags of Our Fathers tells the story behind one of the most famous war photographs of all time, that of six Marines raising the American flag on Iwo Jima. It does this by dividing the narrative into two concerns: the first is the actual Battle of Iwo Jima itself, the second is the aftermath of the publishing of the photo, when three of the men identified as among the flag-raisers, Rene Gagnon (Jesse Bradford), Ira Hayes (Adam Beach), and John Bradley (Ryan Phillippe), are put to work on a war bond drive and have to contend with the public's perception of what the photo means and how that perception differs from their own brutal experiences.


The View From 2006
The Good: "A pointed exploration of heroism — in its actual and in its trumped-up, officially useful forms — the picture welds a powerful account of the battle of Iwo Jima, the bloodiest single engagement the United States fought in World War II, with an ironic and ultimately sad look at its aftermath for three key survivors." - Todd McCarthy, Variety

The Bad: "[H]owever deeply felt Eastwood's commitment to the project, however laudable his struggle with the moral complexities of war, he simply hasn't made a movie that's compelling to watch on its own terms." - Dana Stevens, Slate


The View From 2016
In many respects, Flags of Our Fathers is a typical kind of post-Saving Private Ryan war movie, one that brings the stark horror of war to the forefront, depicts the men in it not as "heroes" in that idealized way but simply as men sent to do a job and doing it to the best of their abilities while trying to get out alive, and struggling thereafter to understand the random chance of living or dying and the guilt of being one of those fortunate enough to live. In other respects, Flags is very different, less about war itself than about the idea of war in popular culture. It's about the ultimate sacrifice being used as a marketing tool, the photo in question turned into propaganda and the image replicated in ways that seem increasingly crass and disrespectful, demonstrating a fundamental misunderstanding about what the photo is depicting as well as the wide chasm between the outsider's perception of war and the experience of those who were there. Celebrated everywhere they go, the men - with the exception of Gagnon, who kind of enjoys it - would really prefer not to be called heroes and not to be treated like they've done something special when most of the men they fought alongside are now dead. To them the things they did were no more extraordinary than anything anyone else on the island did, and to be celebrated and singled out as they are is a painful reminder of the friends they've lost.

This is particularly true of Hayes, who spends the war bonds tour trying to drown his memories with alcohol, shaken by the things that he experienced on Iwo Jima and increasingly bitter at the empty spectacle he's being forced to participate in by the government. To add insult to injury, even as he's being praised, he's being denigrated for his heritage. He's asked if he carried a tomahawk into battle, if he misses his "squaw" back home, he's nicknamed "Chief" and called "redskin," his drunkenness written off as being the result of his race rather than the trauma he's endured, and greeted by someone who purports to be speaking in the language of his tribe and when he doesn't understand what the man is trying to say, is met with hostility as the man implies that he's too stupid to recognize his own language. "I guess I've been off the reservation too long," he replies, seething with anger. Beach is so good playing Hayes, steadily broken down bit by bit by discrimination, by memories he can't escape, by the pressure of being in the spotlight, by guilt, and by alcohol, that it's breathtaking and it's amazing to look back and see that he received no recognition from the major award groups, though he did receive Supporting Actor nominations from a handful of critics groups.

Beach's performance was highly underrated at the time, but the film itself, which was generally well-received if not enthusiastically so, really isn't. For all the new angles Eastwood and screenwriters William Broyles Jr. and Paul Haggis try to find into the war movie genre, a lot of the film feels derivative. While it's probably impossible at this point to not compare any war movie that depicts a beach landing to Saving Private Ryan, the landing in Flags of Our Fathers really brings that famous sequence to mind and naturally pales in comparison even though Eastwood is not at all shy about showing the gruesome aspects of warfare (with one exception, which is intentionally vague as a matter of respect for the dead). The film also has in common with Ryan an unnecessary framing device depicting Bradley as an old man still struggling to cope with the fact of his survival. Along with this comes a small subplot in which his son interviews various people and delivers a voiceover that tries to put a profound bow on the film's finale, but instead just feels mawkish. But even so, the power of Flags of Our Fathers' best parts far outweighs these small faults. It's not a masterpiece of it's genre, but it is a good movie, flaws and all.
Posted by Norma Desmond at 8:00 AM