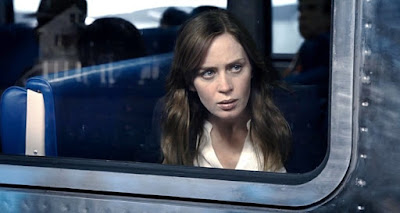 Back in the day, when the "erotic thriller" was a staple of Hollywood's annual output, there was many a story that turned on "crazy bitches" and the poor men whose errant libidos placed them in those women's sights. In those narratives the woman, who appears at first attractive and sexually available and then reveals herself to be violently unstable, becomes a thorn in the side of a good man who made a mistake and who is redeemed for his misdeeds by being targeted by the woman, while the woman is typically punished with death. In these stories the woman is always crazy, her wrath unprovoked, the man a victim. The Girl on the Train is a story told from the point of view of the "crazy bitch," who maybe isn't so crazy, whose wrath maybe isn't so unprovoked, whose "victims" maybe aren't so innocent after all. If only the movie were a little bit better, this would make for a refreshing change of pace. But, hey, great performance from Emily Blunt nevertheless.

Rachel Watson (Blunt) is no longer the girl she used to be. She's a woman gone to seed, the kind that people glance at with a mixture of embarrassment and pity and then quickly look away from lest she latch on to them. Her alcoholism has destroyed her and cost her everything important in her life, including her marriage to Tom (Justin Theroux), who has now remarried their former realtor, Anna (Rebecca Ferguson), and had a child with her, and the only thing that Rachel has left in her life that gives her any feeling of joy is the twice daily train ride that gives her the chance to catch glimpses into the life of a couple whose backyard looks out onto the tracks. To her they're the perfect couple until one day she sees the wife, who turns out to be Tom and Anna's nanny, Megan (Haley Bennett), in what appears to be a romantic moment with a man who isn't her husband. The sight unlocks a deep rage that has been welling within her ever since Tom left her for Anna and leads her to do something that she can't remember, but which leaves her bruised and bloodied when she wakes up in the morning.

Adapted by Erin Cressida Wilson (whose previous credits include Secretary and Chloe) from the novel of the same name by Paula Hawkins, with the action transported from London to New York, The Girl on the Train is built around the conceit that the person in control of the narrative isn't a trustworthy storyteller (in this respect the film has a little in common with Chloe, though in this case the person relating the fabrications isn't necessarily doing so on purpose). Sometimes Rachel intentionally lies, sometimes she's just confused because the drinking has made her memories fuzzy, and sometimes she's relating other people's version of events and her own behavior because she doesn't have any memory of it herself. While Rachel has no shortage of antagonists - from Anna, who believes that Rachel is a danger to her daughter and has been stalking her and Tom, to the police officer (Allison Janney) investigating Megan's disappearance, who believes that Rachel knows what happened to Megan, to Megan's husband (Luke Evans), who comes to believe that Rachel is interfering in the investigation and trying to get the police after him - her major battle is with herself, with the part of herself that she doesn't understand and which leaves her fearful of what she might be capable of.

But is Rachel a villain or is she a victim? Is she "crazy" or has she been steadily driven to the point of madness? Rachel is a person who has a lot of rage bottled up inside - and, as played by Blunt, the quaking intensity of her anger is as compelling as her pained vulnerability - but what sets The Girl on the Train apart from a lot of "woman scorned" narratives is that that rage is depicted as being entirely justified (and, really, once all the dots are connected Rachel's rage level actually seems a bit modest), the story as one of misogyny brought brutally to life and snuffed out as a necessity. At times this makes for something compelling, though that has less to do with the hamfisted nature of the storytelling and more to do with Blunt's utterly absorbing performance, which so perfectly captures Rachel as a person descended into shame and self-loathing that it outclasses everything else in the movie. There's one scene in particular, where Rachel attends an AA meeting in what proves to be a fruitless attempt to stop drinking that touches on something so real that it feels like a scene accidentally spliced in from a much more serious movie rather than one as deliberately trashy as this one is.

Having never read the book, I can't really speak to whether The Girl on the Train is a successful adaptation, but I can say that it's not especially successful as a film. Aside from Blunt there isn't a ton to recommend it, as even though the story takes the occasional sojourn away from Rachel's perspective in order to explore that of Anna and Megan, neither woman ever feels fully realized. Anna emerges from the film as something of a mystery, her motivations vague, the needs of the story limiting her to one dimension, while Megan is saddled with a backstory that doesn't feel at all believable and serves to further depict her in the lurid light the film has seemingly reserved for her. But perhaps the biggest problem, given the genre, is that director Tate Taylor just isn't very good and building and sustaining tension, rendering the whole thing just a little bit flat. Blunt is great, but the film never rises to her level.
Posted by Norma Desmond at 8:00 AM