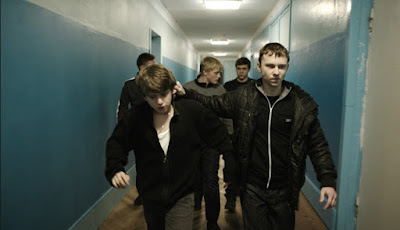 Movies started as a medium without voices. Not without sound, necessarily, as most films had at least a musical score to assist in setting the mood of the action on screen, and not without words, either, as intertitles were used to help move the stories along, but without the sound of the characters' voices. But even in the days of silent films there were filmmakers who used intertitles sparingly and were content to let the images do the talking for themselves. Once the movies started talking, we started to rely increasingly on dialogue to provide us with the sign posts to help guide us through a narrative, so the idea of a movie that doesn't use words at all may seem daunting, or even like an endurance test. Myroslav Slaboshptyskyi's The Tribe is a film set at a school for the deaf in which the dialogue occurs only through Ukrainian Sign Language, none of which is subtitled. To watch it requires that you fill in a certain amount of blanks in order to keep up with it, but Slaboshptyskyi is so good at conveying the story through images that The Tribe is a deeply rich and engrossing viewing experience even if you can't grasp everything that's happening down to its last nuance.

The protagonist is Sergey (Griroiy Fesenko), who in the film's opening moments arrives at a boarding school for the deaf and quickly finds himself brought into the fold of the gang that rules the school, which is supported (and exploited) by some of the members of the school's administration. In addition to theft (and beatings which occur to enable theft), the gang is involved in prostitution, with two of the girls from the school regularly being taken out in the middle of the night to turn tricks at a truck stop, with one of the boys from the gang acting as escort. When the boy who has been acting in the role suddenly dies, Sergey is recruited to take over for him, but after Sergey has sex with Anya (Yana Novikova), one of the girls in question, he becomes possessive of her and tries to get in the way of her continuing to work as a prostitute, which puts him into conflict with both her and the rest of the gang.

The Tribe is a difficult film, both in terms of the adjustments that one has to make as a viewer in order to take in information without subtitles to help explain the subtleties of what's going on in any given scene - the story is fairly straightforward, but you have to get a bit deep into certain scenes before you can really orient yourself to what's going on - and in terms of the sheer brutality of it all. Really terrible things happen throughout the course of the film, from the gang swarming and beating an unsuspecting victim, to vicious beatings that occur within the gang, to a scene involving a back alley abortion which isn't graphic, necessarily, but which is utterly horrifying nevertheless, to the relentless violence of the film's finale. The fact that it all occurs without the verbal cues most of us are accustomed to - not only do the characters not speak, but they typically don't even cry out when they're in pain or emit the sort of non-verbal sounds that can be used to indicate emotion - serves to make it all the more unsettling.

That unsettled feeling created by the voicelessness of the characters extends to underscore just how vulnerable those characters are. The kid who precedes Sergey as the escort for the prostitutes dies because he doesn't hear a truck backing up and doesn't realize what's happening until the truck is literally dragging him under its wheels. There's a scene late in the film, after Anya has had an abortion (which occurs in such a barbaric fashion that I almost didn't make it through the whole scene), when she wakes up to find Sergey in her room and he rapes her, seemingly unaware of how much physical pain he's causing her because she can neither physically stop him nor communicate to him that he's hurting her. Finally there's the whole sequence at the end, which can only occur as it does because the characters involved cannot hear what's going on and are therefore just sitting ducks, unaware that they're about to be slaughtered. While there have certainly been more graphically violent films, there are few films that I've seen that are more disturbing than The Tribe.

Slaboshptyskyi is matter of fact in his storytelling, preferring long shots and scenes that unfold without cuts, imbuing the film with a sense of relentlessness that is only emphasized by it's willingness to go to the darkest of places. It's a film that demands a lot from you as a viewer and refuses to make things easy to understand or easy to take, and which leaves you feeling haunted by what you've just seen. It's a challenging film but it's also a great one, one which transcends the novelty of its decision to place the audience (except for the audience members who understand Ukrainian Sign Language) at as a far a remove from the action as possible by cutting off the avenues of communication in order to tell a story through the sheer power of images. The Tribe is a powerful film, and an unforgettable one.
Posted by Norma Desmond at 8:00 AM