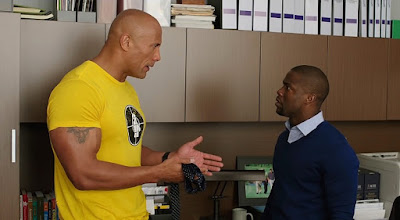 Central Intelligence looks like it was a lot of fun to make. I'm not sure it's ever quite as much fun to watch, but I'm glad that some millionaires got to have a good time. Though the film is sometimes quite funny, it's also strangely inert given the high volume of action sequences spread throughout, and it inspired nothing more in me than indifference. Though indifference is probably better than massive disappointment, which is what I would have felt had I realized beforehand that its director, Rawson Marshall Thurber, is also the director of Dodgeball, a movie as silly as it is funny and had the benefit of Vince Vaughan at the height of his powers. Central Intelligence has the benefit of Dwayne Johnson and Kevin Hart at the height of their powers, but somehow never makes as much of them as it could. Maybe next time will be better, and there certainly will be a next time given that Central Intelligence made a whole lot of money during the summer when just about nothing seemed to make quite enough money.

The premise of Central Intelligence is your basic mismatched buddies scenario. In this case, Hart's Calvin Joyner is a guy who peaked in high school and now finds himself struggling to cope with his lack of professional fulfillment and inability to live up to his early promise, and Johnson's Bob Stone is the guy who was once the target for bullies and is now physically transformed, if not mentally. Though the two were not friends in high school, Calvin displayed kindness and compassion to Bob at the moment of his greatest public humiliation, a fact which has remained with Bob in the twenty years since and which inspires him to reach out to Calvin as their reunion approaches. Calvin agrees to meet Bob for a beer but once his initial shock and delight at the change in Bob's appearance fades, he's more than ready to part ways with his former acquaintance. But Bob, who turns out to be a rogue CIA agent, has other ideas because he needs Calvin's expertise as a forensic accountant to help him follow some money that's involved in the purchase of satellite codes. Unable to break free from Bob, Calvin is unwittingly dragged along as Bob tries to outrun his former CIA colleagues.

The story's premise is a solid enough one, and the pairing of Hart and Johnson feels natural as a study in contrasts, not just in terms of the physical differences between the massive former wrestler and the diminutive comedian, but also in terms of their acting styles, as Hart is high strung and quick to escalate, while Johnson is as laidback as can be. The combination works sometimes but not always, which is because the characterization of Bob is so unstable. Central Intelligence sets itself up and then builds itself around a series of reversals, with Bob introduced as someone who is clearly not what he seems, then revealed to be a rogue agent, then claiming to have been set up and working to clear his name and catch the real bad guy, then he's said to be a ruthless killer, then he isn't, then he is again, then he isn't again. Because the film is in a constant state of credulity, adapting its perspective to whatever the line is on Bob at any given moment, Bob's personality is always shifting, appearing most often as guileless and enthusiastic, like a labrador in the body of the Rock, but at other times as coldblooded. While this could have worked (though I think the screenplay goes back and forth at least once too many times for its own good), that labrador-like characterization goes a touch too far in its efforts to make Bob seem like a nice, virtuous guy so that he seems less like a person and more like an alien trying to pass himself off as a person.

But more than the fickle characterization of Bob, Central Intelligence's main problem is that is lacks focus and tends to meander. There's a long sequence about midway through when Bob crashes Calvin and his wife's couple's therapy appointment which has basically nothing to do with the rest of the plot, stops the narrative dead, and begs the question of how Bob and Calvin have this much time to mess around doing role playing exercises when a CIA team, lead by the no-nonsense Agent Harris (Amy Ryan, hilarious in an understated way), is literally gunning for them. It's not that the sequence isn't funny, it's that it makes the narrative go slack, and it feels like the sort of thing that was thought up in the writer's room as something that would be funny and then shoehorned into the story.

All that said, Central Intelligence is very funny in places and it's a perfectly suitable choice if you're looking for something light and unchallenging. Even playing a weird to the point of being mildly distracting character, Johnson remains one of our most charismatic stars, and Hart's brand of brash, excitable comedy is put to good use here as it means that he comes into the film with his character, who spends the majority of his time running and panicking as he's shot at, already half built. The only real downside to Central Intelligence is that after it's over, you'll have "My Lovin' (You're Never Gonna Get It)" stuck in your head for days (if that is, in fact, a downside).
Posted by Norma Desmond at 8:00 AM

I'm with you. It's okay, but should've been much better. Fun, but forgettable.