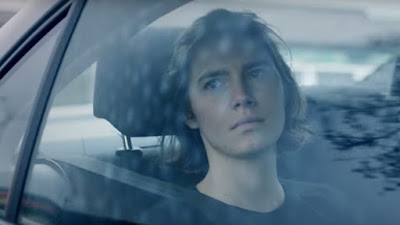 "We have here this beautiful, picturesque hilltop town in the middle of Italy. It was a particularly gruesome murder, throat slit, semi-naked, blood everywhere. I mean, what more do you want in a story?" That question, posed by journalist Nick Pisa (who somehow and effortlessly manages to emerge from this documentary as the most odious person in this story, which feels like an accomplishment in a perverse sort of way), finds its answer later in the film, when Pisa notes that the story also had two attractive young women and a hint of sex. "Girl on girl" crime, is how he puts it. That's what sells papers. Though Rod Blackhurst and Brian McGinn's Amanda Knox is being advertised as Knox's story in her own words, the documentary isn't really about Amanda Knox the person, nor is it ultimately about the murder of Meredith Kercher. It's more about the idea of "Amanda Knox," a hot commodity for a frenzied media dying to tell a story that combined murder, sex, and an American abroad. Whether you believe that Knox has gotten away with murder or that she was unfairly persecuted, Amanda Knox is a fascinating look at how narratives are shaped for the public and how fact can become so knotted up with rumor that they can seem impossible to separate.

Here are the agreed upon facts: in the fall of 2007, American student Amanda Knox and British student Meredith Kercher moved into a flat in Perugia which they shared with two Italian women. Amanda begin dating Raffaele Sollecito at the end of October. On November 1st, Kercher was seen alive for the last time and her body was uncovered, in her bedroom, by police on November 2nd. Under questioning, Knox implicated her boss, Patrick Lumumba, of being involved in the murder. Lumumba was arrested but ultimately released. The fingerprints of Rudy Guede were found at the scene and his DNA was found on Kercher's body. He was arrested, tried, and convicted of murder and sexual assault. Knox and Sollecito were also arrested, tried, and convicted of murder. An appeal trial followed and in 2011 Knox and Sollecito were acquitted of the charges against them and Knox returned to Seattle. A new trial took place, in the absence of Knox, and new guilty verdicts were rendered. In March of 2015, Italy's highest court acquitted both Knox and Sollecito. Beyond those basic facts, things get a bit murky.

Although the two trailers for the film, one called "Believe Her," the other called "Suspect Her," suggest an even-handed take on the part of the filmmakers, Amanda Knox is pretty clearly on the side of Knox and Sollecito being innocent, victims of a prosecutor who fancies himself a bit of a Sherlock Holmes and of a frothing at the mouth press. Knox and Sollecito both participate in the documentary, as does prosecutor Giuliano Mignini and British journalist Nick Pisa, and the picture that the film paints is a grim and terrifying portrait of abuse of power and a maddeningly irresponsible dressing up of rumor as fact. Though the film spends a fair bit of time on the DNA evidence and, in particular, the debunking of that evidence, what comes across from Mignini's interview is that such evidence wasn't any particular factor in his decision to prosecute Knox and Sollecito. For him, Knox's guilt was written entirely in her own behavior, in the fact that she didn't act in a way that he saw as "right" in the circumstances. It's certainly true that some of the choices Knox made are difficult to comprehend (having a shower in the apartment after arriving and finding the door open and drops of blood in the sink) and suggest a lack of empathy (a phone call made by Knox, after the murder but before her arrest, to a friend in Seattle in which the two address the murder almost as if it's a mildly irritating blemish on Knox's studying abroad fantasy); but are these the marks of a killer, or the marks of someone who is astonishingly sheltered and lacking in maturity? People are weird. They behave and react in ways that can seem weird. Knox said and did some weird things, but were they objectively any weirder than Mignini's assumption (based on... nothing) that Knox, Sollecito, and Guede spontaneously decided to act together to kill Kercher as a form of sex play?

But while Mignini comes off badly, it's Pisa, standing in for himself and the press in general, who emerges as the villain among the film's participants. Describing the murder case as manna from heaven, Pisa is gleefully unrepentant about his role in shaping a narrative of Kercher's death as part of a ritualistic sex killing and of Knox as some kind of sex witch, seducing men with her wiles and manipulating them into doing her murderous bidding. For him it was (and, judging by the way he retells it, still is) all about the high that comes from seeing his byline on front page after front page after front page, no claim too outrageous to print (some of the newspaper headlines the film uses to make its point include: "Orgy of Death," "Dead Girl Feared Knoxy's Sex Toy," "Lucifer-Like, Satanic, Demonic, Diabolical... A Witch of Deception," and "Knox Led Ritual Killing"). When discussing the leak of Knox's prison diary to the press (in which it was revealed that the police had lied to Knox and told her that she was HIV positive in an attempt to break her, a fact which is apparently less interesting to the press than that Knox had had seven sexual partners), Pisa has the gall to plead journalistic integrity as the reason why he won't reveal how he got hold of it, and yet later in the film acknowledges that some of the information that got out via the press was "just completely made up," offering the non-explanation, "It's not as if I can say, 'Right, hold on a minute, I just want to double check that myself in some other way'... and then I'll let my rival get in there before me and I've lost a scoop." That someone who calls himself a journalist is so baffled by the very notion of verifying information before reporting on it (because, after all, a "scoop" is only actually a scoop if it's correct) cuts right to the heart of the matter in Amanda Knox. Somewhere along the way, we've started to value telling the story first above telling the story right, and in the process "facts" have become less important than the creation of "content." We want to be able to receive information 24 hours a day, whether it be via cable news networks or the internet, and we want to be constantly receiving new information. This means that checking that information out before releasing it as truth becomes less possible and less important - what matters is getting new information out, not ensuring that that information is true.

Pisa is the only reporter interviewed in the film, but he's certainly not alone in commodifying the tragedy of Meredith Kercher's death, and that skewed view of the case through the lens of money is demonstrated through news footage of Knox's father speaking to reporters outside of his home after her release from prison. A reporter asks when Knox is going to give her first interview and/or make a book deal, advising that she should do it quickly because the longer she waits to tell her story, the less monetary value it will have because the press will have moved on to something else. The reporter refers to Knox as a "hot property" and Knox's father somehow maintains enough composure to calmly, coldly, reply, "I'm not looking at her as a 'hot property.'" Knox is a person. Kercher was a person. These are the things that seem to have gotten lost along the way as this case took its long, winding, and bizarre route towards conclusion. While Amanda Knox is not anywhere near an exhaustive account of the evidence, eliding many of the things that supposedly give credence to the prosecution theory of Knox and Sollecito's involvement, it's a captivating look at how information is disseminated to the masses by the fourth estate. This isn't the story of a murder or a trial; it's the story of how a young woman's terrible death became sensationalized to the point of hysteria for the consumption of the public. Murder, sex, an exotic location. "What more do you want in a story?"
Posted by Norma Desmond at 8:00 AM