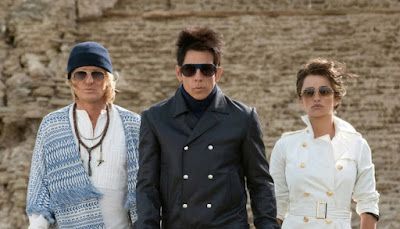 As a wise man once said, "Sometimes dead is better." Sometimes, even if a movie is really funny, and even if it has gone on to become one of the defining pieces of pop culture of its era, its quotes instantly recognizable, its protagonist iconic, it's best to just leave it in that cultural moment and be happy with what you've got. Some movies are perfect just as they are, their endings the perfect cap to their stories, and even if those movies grow in popularity as the years go on, finding and expanding their audience, it's best to just let things be rather than try to recreate the magic more than a decade after the fact, when tastes have changed and the finger is no longer quite on the pulse. Anchorman is a great comedy. Anchorman: The Legend Continues? That's only okay. Zoolander is a perfectly funny movie. Zoolander 2? Hot garbage. Bad Santa better hope the third time's the charm.

In the years since the events of Zoolander, much has changed. Matilda (Christine Taylor), the wife of Derek Zoolander (Ben Stiller), has died, killed in the collapse of the Derek Zoolander Center For Kids Who Can't Read Good, a disaster that the film decides to set in October 2001, a curious decision given that the first film's lackluster box office is often attributed to the fact that it was released two weeks after 9/11. Derek and Matilda's son, Derek Jr., has been removed from his custody because of Derek's inability to properly care for him, and Derek has gone into hiding, as has his friend Hansel (Owen Wilson), whose face was scarred in the building collapse. When celebrities begin dying, leaving behind nothing but their corpses and a final selfie depicting them making one of Derek's signature faces, Valentina Valencia (Penelope Cruz), an agent for Fashion Interpol, asks Derek and Hansel to help her figure out who is targeting celebrities and why.

15 years is a lifetime in culture, so the obvious joke for Zoolander 2 to build itself around is that Derek and Hansel, once perfectly in tune with a certain segment of culture, are now completely out of touch with it. There are two ways to approach that setup. One is to turn the joke on Derek and Hansel and get your mileage out of the acknowledgment that "cool" is an unstable concept and in constant flux, so that a trend that was popular in 2001 might seem laughable in 2016. The other way is to turn the joke on everyone and everything else, which is a sourer approach to take as it's suggestive of a "get off my lawn" type attitude towards the way that trends have changed. In this case, while the film still casts Derek and Hansel as remarkably stupid, it casts the culture that they return to as literal garbage. While the first film had "Derelicte," a fashion line inspired by the homeless, and the joke (which was based on an actual fashion line by John Galliano) was on the economic tourism of the elite appropriating poverty for the sake of style, in the second film the "Derelicte" concept is something that has been widely embraced as the prevailing cultural ideal, with fashion taking on a manicured scuzziness, and trendy buildings being constructed out of literal waste. The designer of the moment is Don Atari (Kyle Mooney), a hipster whose every word is laced with contempt and who literally labels Derek and Hansel as "Old" and "Lame."

None of this is particularly offensive, though it speaks to a certain level of anxiety on the part of Generation X about Millennials replacing them as the pilots of the zeitgeist and rendering them irrelevant as contributors to pop culture. The film steps into thornier territory in its depiction of All (Benedict Cumberbatch), an androgynous model who prefers not to identity as any particular gender and a character that attracted controversy and accusations of transphobia to the film before it was even released. Having seen the film now, I'm not sure that the character is transphobic per say, in that I don't think the joke is on All. As best I can tell, the joke is on Millennial culture and the idea of rejecting labels and accepting more fluid notions of gender and sexuality to the point where nothing means anything because everything is everything and acceptance needs to be instant and enthusiastic or one risks looking like a bigot. Which I guess means that the joke is on... the idea of being inclusive? It is, at best, ill-conceived and demonstrates a failure to properly read the room, but it's also (and this is pretty important for a comedy) not funny.

"Not funny" is the major problem with Zoolander 2, which doesn't contain a story so much as a thin riff on The Da Vinci Code which is used to connect one cameo to another. Zoolander had a lot of cameos itself, of course, but Zoolander 2 feels like it has three times as many because now everyone wants to be in on the joke. Of the 30 plus cameos (which include, deep breath, Kiefer Sutherland, Susan Sarandon, Katy Perry, Neil deGrasse Tyson, John Malkovich, Naomi Campbell, Billy Zane, Sting, Ariana Grande, Willie Nelson, Skrillex, MC Hammer, ASAP Rocky, Christina Hendricks, Anna Wintour, Valentino, Tommy Hilfiger, Alexander Skarsgard, Karlie Kloss, Alexander Wang, Katie Couric, Matt Lauer, Marc Jacobs, and Justin Bieber) only the one involving Susan Boyle actually made me laugh, and there's not much happening around or in between the cameos that's actually funny until Will Ferrell shows up as Derek's nemesis, Mugatu, towards the end of the film. On his arrival, Ferrell injects the film with some much needed comic energy, but by that point it's too little, too late. Zoolander is a comedy touchstone, but Zoolander 2 is destined to be forgotten.
Posted by Norma Desmond at 8:00 AM