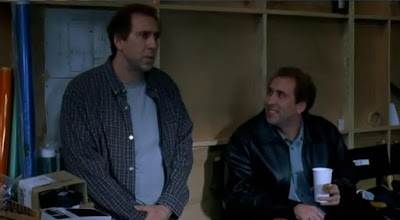 Few films have ever danced closer to the edge than Adaptation, Charlie Kaufman's dramatization of the impossible task of adapting Susan Orlean's "The Orchid Thief" for the screen, as told by Spike Jonze. In addition to its daring gambit of taking characters based on real people, who share the same names as those real people (real people who could have declined permission for the portrayal), and having them straight up try to murder two people (and succeeding in one case), it also runs the very real risk of disappearing up its own ass as it as it reflects on, dissects, and makes a jest of the creative process. At once an intimate story about the struggle to create itself, and an expansive story that's about everything, really, Adaptation is one of the most interesting and creatively breathtaking films of the last 16 years, confirming (if any further confirmation was truly needed) that Charlie Kaufman's brain is one of the most fascinating places on Earth.

Adaptation is built on layers upon layers of narrative being shaped for various mediums for various purposes. The germ is the story of John Laroche (Chris Cooper), a horticulturist who believes that he's found a way around Florida's poaching laws in order to obtain the rare ghost orchid, and ends up arrested and standing trial. His trial is covered by Susan Orlean (Meryl Streep), who writes a story about it for The New Yorker. Orlean's telling of the tale so attracts a publisher that she's asked to expand upon it in the form of the book that will become "The Orchid Thief." In turn, the story as told through the book attracts the attention of film producer Valerie Thomas (Tilda Swinton), who hires screenwriter Charlie Kaufman (Nicolas Cage) to adapt it for the big screen. The story is intriguing enough to have made its way through several tellings already, but what Charlie discovers when he sits down at his typewriter is that, in fact, there's no story here at all. There's anecdote and observation, there's colorful detailing, but there's no narrative, no point of entry through which Charlie can get into the story, and this discovery pitches him into an extended period of agony and anxiety. To make matters worse, while Charlie struggles with his own project, his brother, Donald (Nicolas Cage), finds great success writing a thriller called The 3, which relies heavily on Hollywood formula that Donald has learned by attending a screenwriting seminar. In an effort to get the job finished, Charlie turns to Donald for help, and his own story begins to take the form of the most cliched of Hollywood adventures.

Metatextuality can be a difficult needle to thread because so often it plays as a bit smug and too clever by half, but Adaptation works because it doesn't just skewer mainstream Hollywood movies and the industry's tendency to simply churn out the same movie over and over and over again, though it does do this brilliantly and primarily through the conversations between Charlie and Donald, with the latter enthusiastically embracing the teachings of Robert McKee and the former constantly trying to explain why doing so eliminates creativity and originality from the mix (best line of the movie? When Charlie lists the reasons why Donald's screenplay is derivative and he responds, "Mom called it 'psychologically taut.'"); it also ends up turning the joke on itself. What begins as a film that shatters the divide between story and storyteller, turning the narrative into act of its own creation, ends in the exact way that Charlie himself would argue that it shouldn't. In his efforts to create something that's true and that's different, Charlie writes himself into his screenplay (which in turn means that there are now three Charlie's at play: the actual Charlie Kaufman who has written Adaptation, his fictionalized version of himself that's struggling to adapt "The Orchid Thief," and the fictionalized version of his fictionalized self that is now in the screenplay within the screenplay - is it any wonder that Kaufman's directorial debut, Synechdoche, New York would also play on the idea of identity as a mirror reflected in a mirror reflected in a mirror?) and makes the story about his struggle to write the story and then, in his efforts to find the ending, finds himself in exactly the kind of cliched climax - running through the swamp with Donald, pursued by Susan Orlean and John Laroche, intent on killing them - that he abhors, which of course means that the actual Kaufman wrote a screenplay that was weird and wild and different for its first two acts and then attached a standard issue thriller ending onto it.

But while the structural playfulness of Adaptation is part of the fun, the film resonates because it never just rests on the laurels of its "hook." For all the fourth wall smashing that it does, it still manages to create moments that feel true and moving and characters that feel rich and well-drawn. Laroche is a character with a capital "C," a guy who looks like he just crawled out of the swamp and who fancies himself a philosopher king, but he's also a damaged person whose tendency to build his life around a hobby for years only to abandon it and move on to the next thing suggests that he quits things before they have the chance to quit him, a notion emphasized by his tendency to become prickly and cruel when faced with even the slightest of challenge to his feeling of superiority. Susan is fascinated by Laroche until she becomes the target of that side of him, spending a day trudging through the swamp with him looking for the ghost orchid, only to find it and declare with defeat that it's just a flower. Yet she remains drawn to Laroche because she wants to understand what it is to feel an all consuming passion for something. Then there's Charlie and Donald, who are the two sides of an artist: the side that wants to break barriers and be respected, and the side that wants commercial success. They're distinct characters (even the way that they hold themselves and move and occupy space is different), but they represent two halves of a self.

Cage has rarely been better than he is in Adaptation and the performance is one that should probably be watched every couple of years if only to remind you that, despite having descended into a strange parody of himself over the last decade, there's a great actor there, one capable of subtlety and nuance. He would be Oscar nominated for the film, as were Cooper (who won) and Streep (who should have won), and the three performances are all the more breathtaking when you consider that they're built out of fragments of what is real (within the world of the film), what Charlie imagines, and what Charlie actually writes (and in some cases rewrites). That the characters seem fleshed out when they're really just made up of pieces of different ideas about what each of them is, is a testament to the power of the performances, as well as Kaufman's screenplay and Jonze's direction, which is light enough on its feet to follow the screenplay in all the strange direction it goes and yet grounded enough to create actual connection between the film and the audience. Adaptation is a rich and very funny film that challenges but also rewards. It's without question one of the masterpieces of the century and one of the greatest movies about movies ever made.
Posted by Norma Desmond at 10:47 AM