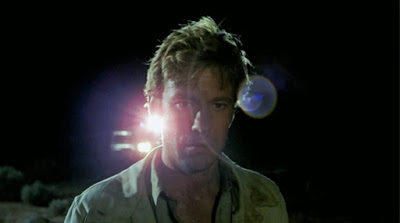 Sun-drenched and brutal, Wake in Fright is a primal scream of a movie that plays like a guided tour of hell. It's amazing that a film that feels so vivid and essential could come as close to being lost for all time as this one did, and a miracle of perseverance that it was ultimately rescued from such a fate, its negatives literally snatched from a bin marked "for destruction" and then painstakingly restored. Adapted from the novel of the same name by Kenneth Cook, Wake in Fright is an unrelenting and deeply unsettling story of a man's degradation and self-destruction in the Australian outback - and not just because it famously contains footage of an actual kangaroo hunt (although that certainly helps in maintaining the overall atmosphere of despair and horror). Wake in Fright isn't for the faint of heart, but it's definitely a timeless classic.

Director Ted Kotcheff, who started his career making movies like Life at the Top and The Apprenticeship of Duddy Kravitz and ended it making movies like Weekend at Bernie's, opens the film with a shot that is as graceful as it is dispiriting. It's a panoramic shot that begins on a set of train tracks, slides over to the small building on one side of it, which is surrounded by empty, dusty land as far as the eye can see, and then comes to another building, directly across the tracks, the only other building in sight. This is Tiboonda, a rural outpost where John Grant (Gary Bond) teaches in the one room school house on one side of the tracks, and rents a room in the bar/rooming house on the other side. As the film opens the school is breaking for Christmas and Grant is planning to go to Sydney to meet up with his girlfriend, a journey which will require him to spend a night in the town of Bundanyabba. When he arrives in "the Yabba" he's quickly seized upon as the outsider that he obviously is and though he tries at first to keep to himself, he's soon drawn into the sordid pastimes of the men of the place, leading to his moral and psychological destruction.

From beginning to end, Grant finds his manhood tested as he descends deeper and deeper into a world where all niceties are stripped away and masculinity presents itself in its most base and animalistic form. Even at the beginning, when he's put together and comparatively refined, he's in a submissive position, unable to be the master of his own destiny as a result of the terms of his employment. In exchange for receiving his college education, he's entered into a financial bond with the government which requires him to accept whatever post he's assigned and which he can only escape by paying back $1,000. Then when he gets to the Yabba and his inhibitions are lowered by the constant flow of alcohol, which he drinks in such quantities in order to prove himself to the men around him even as he looks down on them for being coarser than he is himself, he is further debased as he throws himself into the vices of the men around him. As one day stretches on into the next and the next, Grant moves from one group of men to another and one debauched scene to another, finally culminating with an ambiguous sexual encounter that further underscores his deficiencies in the realm of "traditional" masculinity.

That final deficiency was already suggested through his encounters with women, with him having a disastrous encounter with a woman in the Yabba and earlier than that remembering or imagining an encounter with his girlfriend in which she leans over him seductively but he doesn't actually touch her, and in a way the film as a whole can read as Grant trying and failing to affirm his heterosexuality until finally giving up entirely as he accepts that desire as fruitless. First he engages in an act of self-sabotage that leaves him stuck in the Yabba, then he escapes but gets dragged back as a result of a misunderstanding, and finally discovers that even death offers no escape. In the end, he never makes it to his girlfriend in Sydney and doesn't get to leave the Yabba until he accepts the futility of trying to get to Sydney. In other words, he can't leave until he gives up on the notion of his heterosexuality and accepts things for how they are, including accepting the man who so repulsed him with his refusal to conform to any kind of social mores and who is ultimately the one who ensures Grant's release from his personal hell.

Wake in Fright is a taut thriller that is constantly raising the stakes as it gets deeper into its narrative. Photographed by Brian West, every scene seems like its marked by a lurid glare, even the ones that take place in the dark, and Kotcheff's strategy when framing scenes involving groups of characters is effective at establishing the community as this amorphous gang of men made desperate and wild by boredom and the fact that they seem to outnumber women by a wide margin. It's unsurprising that early screenings of the film in Australia met with some objection from the audience, given that most of the men on screen are depicted as borderline feral, but Kotcheff's unforgiving eye is what gives the film its brutal impact. Wake in Fright is an unforgettable film.
Posted by Norma Desmond at 8:00 AM