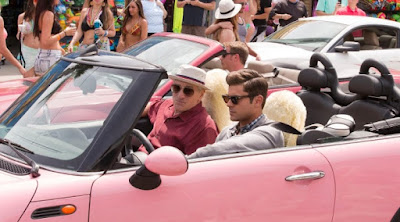 Released every year since 2005, the "Black List" is a list of the most widely liked unproduced screenplays floating around Hollywood. It's not a "best" list, per say, but rather a list of the screenplays that have garnered favorable reactions from the most people in the film industry. Among the films to make the list are Best Picture winners Spotlight, Argo, The King's Speech, and Slumdog Millionaire, as well as Best Picture nominees Django Unchained, The Social Network, There Will Be Blood, Juno, and The Queen, among others, and at least one Black List screenplay has been Oscar nominated every year since 2006. So, it's a fairly prestigious list that has included some of the films considered, and awarded as, the best of the best by the industry. It is also, however, a list that has included such ill-received films as Wild Hogs (14% on Rotten Tomatoes), Our Brand Is Crisis (35%), That's My Boy (20%), The Last Witch Hunter (16%), and Sex Tape (17%). So they certainly aren't all winners, which goes a long way to explaining how a film like Dirty Grandpa could have made the list despite being completely awful.

The premise of Dirty Grandpa is simple: Jason (Zac Efron) is a young lawyer who is henpecked by his fiancee (Julianne Hough, delivering an astonishingly awful performance, even once you've taken into account how broadly and carelessly written the character is) and dominated by his father (Dermot Mulroney), who has mapped out Jason's life path down to the last detail, including his career choice and his fiancee. Seeing what has become of Jason, his grandfather (Robert De Niro), decides to take action by making Jason to see that he's living his life all wrong. He does this by using the pretense that he needs someone to drive him to Boca Raton, as his own license has been revoked, and the two set off on a road trip during which they end up crossing paths with Shadia (Zoey Deutch), a former classmate of Jason's, and her friend Lenore (Aubrey Plaza), and then make a detour through Daytona Beach during Spring Break. Hijinks ensue.

I can actually kind of see how a story like Dirty Grandpa could be well received in Hollywood. Assuming that the industry demographics are more or less in line with the demographics of, say, AMPAS membership, then the industry is overwhelmingly white and male, and predominantly 60 and older. The existence of Dirty Grandpa makes a lot of sense when you consider it in those terms because it's nothing if not a reflection of how an old white man with power would see himself. Stripped down to its basic elements, it's about a senior citizen who is smarter than everyone else around him, whose shortcomings are acknowledged but also explained away with a good excuse, and who is still virile enough that he can beat up a whole group of men some 40 years younger than he is and be the object of eager sexual pursuit by a woman younger than his grandson. The title character may be a "grandpa," but he's also a guy who says whatever he wants no matter how vulgar, racist, homophobic, or misogynist it is, who not only beats up an entire group of black people but so thoroughly puts them in "their place" that later they applaud him when he says the n-word, and whose every interaction with a nubile young woman is centered around how much she wants to have sex with him. The film fetishizes him as if this is meant to be aspirational and/or adorable, making it something of a wish-fulfillment fantasy.

If nothing else, a film like Dirty Grandpa provides a small window of insight into something like Clint Eastwood's comments earlier this year about the "pussy generation." The De Niro character is a man's man, a man like how men were once expected to be; he's a doer and leader. The Efron character is an emasculated husk of a man whose life is controlled by his father and by his shrewish fiancee; he does what he's told and disregards his own desires. In accordance with his fiancee's demand, he shows up for the road trip not in his SUV but in her little pink car, which his grandfather declares (multiple times) looks like a vagina. As he sees it, his task is not merely to set Jason free of the trap he's about to fall into with his potential marriage, but to teach him how to shake off the shackles of "polite" society and be a real man. As he sees it, the world is going sideways because a young white man his grandson's age can no longer engage with society the way that he himself did when he was that age because culture has been shifting to be more inclusive to multiple needs and voices, rather than simply catering to one small segment of the population. Like Eastwood's comment, Dirty Grandpa is rooted in the fear of privilege being lost and plays as coming from the perspective of someone desperately trying to reassure himself that he still has a voice and that it's just as important, and just as central to society, as it always was. It's a statement that old white men ought to be deferred to because they're the only ones who actually know what they're doing and that they should be treated with nothing but respect, even if they don't accord any respect to anyone else.

Politics aside, Dirty Grandpa is a void of a film, entirely lacking in creativity (in the span of less than five minutes, characters compare Jason to the Terminator twice, first as "Mitt Romney Terminator" and then as "cock-blocking Terminator," and, no, the designation "Terminator" does not actually make sense within the context of either interaction) or cleverness. It's jokes aren't jokes so much as strings of non-sequiturs, with almost every scene centering around the idea that what Grandpa says is so outrageous it has to be funny. I don't think it's a coincidence that the film's script made its appearance on the Black List at around the same time that the Shit My Dad Says twitter account had made its transition into a television series, as the film's entire premise boils down to: "old men, they tell it like it is and they give no fucks about it." That might feel reaffirming to the target audience, but it's alternately boring and annoying as hell for the rest of us.
Posted by Norma Desmond at 6:58 PM