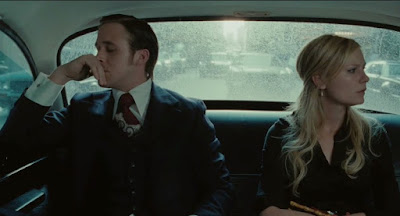 It says a lot about a person if they can watch a film based on events of their own life which depict them as weak-willed, mentally unstable, a spousal abuser, the murderer of two people and the instigator of the murder of a third, and think, "I find this portrayal very flattering." Maybe it's just that being played by Ryan Gosling goes a long way. The story presented by All Good Things, which is a "names have been changed" version of the life of Robert Durst, is odd enough as it is. It's even odder when you factor in that Durst's enjoyment of the film prompted him to reach out to director Andrew Jerecki and agree to be interviewed, which in turn resulted in the television miniseries The Jinx, which in turn resulted in Durst being arrested and charged with one of the murders depicted in this film. Life is always so much stranger than fiction.

All Good Things' version of Durst is David Marks (Gosling), the eldest son of powerful real estate tycoon Sanford Marks (Frank Langella), who wants nothing more than to escape from his father's sphere of influence and interest, and quietly seethes with resentment over his father's insistence that he join the family business in addition to blaming his father for the suicide of his mother when he was a child. Sent out to fix a sink at one of the apartments his father's company owns, David meets Katie McCarthy (Kirsten Dunst) and quickly begins a relationship with her. Despite his father's disapproval, he marries Katie and the two leave New York in order to open a health food store in Vermont (the eponymous "All Good Things"), living happily and quietly together until Sanford, who has been funding the sojourn to Vermont, arrives and demands that they return to New York and that David begin working for the company, which is up to some pretty shady things.

Perhaps the reason that Durst responded so strongly to the film is that it lets him off the hook just a little bit for the horrible things he's alleged (and, in some cases, confirmed) to have done. The suggestion of the film is that, had he simply been left to his own devices, had his father released him from his clutches and simply allowed him to live the life he wanted, rather than forcing him to conform to a way of life that left him feeling controlled, marginalized, and suffocated, then he might have turned out to be a bit strange but would not have become a murderer. Certainly, the way that Gosling plays David, it's as if the good in the character slowly starts to die as soon as he's dragged back to New York, the light inside him becoming dimmer and dimmer until finally extinguishing completely, leaving nothing but a hollow shell of a person behind.

At the same time, though the film does firmly emphasize the idea of David being crushed beneath the will of his father, it doesn't present the situation as being quite that cut and dried. The collapse of David's mental health is depicted as being somewhat inevitable, a genetic inheritance from his mother that would have been sparked at the first major conflict in his marriage, which turns out to be Katie's discovery that she's pregnant and David insisting that she have an abortion. The marriage slowly collapses after that, which coincides with his mental collapse, leading to increasing incidents of physical abuse and culminating in Katie's disappearance with David suspected of having killed her. The way that the film draws the relationship between David and Katie, and the way that Gosling and Dunst play their characters, with the former turning more and more inward and more and more remote while the latter comes increasingly to exist in a state of shell shock, unable to go on as she and David have been and yet unable to leave; is fascinating and an entire movie could have been made exploring their troubled relationship and its very troubling end, but All Good Things ultimately has much more on its mind.

Whether Durst actually killed his wife (who is real life was named Kathleen McCormack) is unknown; it's not one of the crimes he's ever been arrested for. At the time this film was made, the only crimes he'd been charged with had to do with his involvement in the death of Morris Black (Malvern Bump here, played by Philip Baker Hall), whom he claimed to have killed in self-defense and then dismembered. That story, too, is interesting enough to encompass its own movie and here involves David half-assedly disguising himself as a woman in order to live incognito in Texas and then talking Malvern into assassinating his friend Deborah Lehrman (in real life Susan Berman, whose murder Durst would be charged with after The Jinx was released) because she knew too much about Katie's disappearance. Though not a long movie, All Good Things covers a lot of ground and a lot of incident, and perhaps tries to do just a little too much to be truly successful as a film. There are things about it that work and work very well, among them the performances and the increasingly creepy motif of a flowing river in the dead of night, and I would recommend it on that basis, but the story is just a bit more than the film can comfortably handle. That said, I patiently await the day that someone makes a movie about Durst watching this movie, agreeing to talk to Jarecki and ending up implicating himself enough to get arrested and charged with murder. Now there's a movie.
Posted by Norma Desmond at 8:00 AM