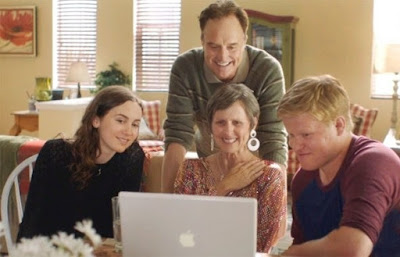 Other people always, somehow, have it better. Yet everyone is "other people" to someone, even the guy who is experiencing a crushing professional disappointment, the breakdown of a relationship, and the impending death of his mother. But try telling that to the guy. Chris Kelly's Other People, based partially on his own experience losing his mother to cancer, is about the year a man spends watching his mother succumb to a fatal illness. Parts of it are heartrending and, as it is in life, parts of it are funny; sometimes it's even both at the same time. In a general way, it plays out the way that a lot of stories where people come to terms with things play out, but there's just enough specificity in the details to make it feel more personal and more emotionally raw than your average family dramedy.

Kelly wastes no time when it comes to telling the audience exactly what kind of movie Other People is going to be. The protagonist's mother, Joanne (Molly Shannon) dies, surrounded by her husband, Norman (Bradley Whitford), and their children, David (Jesse Plemmons), Rebeccah (Madisen Beaty), and Alexandra (Maude Apatow). As her family weeps over her death, an acquaintance calls and leaves a long message on the answering machine, blissfully unaware that while she's trying to negotiate a balance between wishing Joanne well and trying to place an order at the drive-through, the woman she's calling is already dead. It is both the darkest and the funniest scene in the movie, which then shuffles back in time to the previous December, when David first returned home to live with the rest of the family and help care for Joanne, entering the advanced stages of a rare form of cancer. During the first months Joanne is still undergoing treatment, however, once it becomes clear that chemo is accomplishing little for her, she opts to quit and shift focus to quality of life instead.

In elliptical fashion, the film charts the next several months leading up to Joanne's death, seen through the eyes of David, the outsider of the family both by circumstance and by choice. While Rebeccah and Alexandra still live at home in Sacramento, David has long since decamped to New York, where he's been living with his boyfriend, Paul (Zach Woods), and working as a writer. To the extended family he's referred to, with patronizing affection, as their "New York City boy," a nickname he tries to shrug off though it obviously bothers him, presumably because it puts him on the spot and marks him out as different when he already feels different enough. Though his mother and sisters have long since accepted his sexuality, his father still refuses to acknowledge it and during a trip to New York so that Joanne can watch him perform with his sketch comedy troupe, prefers to wait outside on the sidewalk rather than go up to the apartment that David has been sharing with Paul. While Norman will reference the partners and love lives of Rebeccah and Alexandra, he treats David's romantic life as if it's a blank, leading to a mounting sense of frustration on David's part that is kept in check solely by his and Norman's mutual desire to keep things calm and happy for Joanne.

Yet, while David has been forced into an outsider position in certain ways - by being the gay one, by being the one who left - that position is also one that he's helped to create for himself. The idea of his moving home was so that the family could be together, first to help care for Joanne, and then simply to be together as a family in her final months. But for David grief is not a group activity and while he devotes a lot of one-on-one time to Joanne, he holds himself apart from the rest of the family, declining invitations to go out with his sisters or to just hang out at home with them, usually citing his need to go to his room and get some writing done. While David is selfless in many ways, he's also rather self-centered, unable to see that when his sisters invite him to spend time with them, what they're actually saying is that they need to spend some time with him because he's the only other person who gets what they're going through, and unwilling to abandon his victim stance long enough to recognize that even if he's earned it by virtue of Norman's decade-long denial, he's become so fixated on keeping score about who does and doesn't take an interest in his life, that he fails to see how little he takes an interest in the lives of the people around him. His myopic view is one that, unfortunately, the film shares insofar as David emerges as the only fully fleshed out character in the film, Joanne and Norman are fleshed out only to the extent to which they relate to David, and Rebeccah and Alexandra remain something of a mystery, cast to the periphery and barely formed as characters.

Other People is very much David's story, guided by his perspective and the limits of his ability to see beyond himself. At his most self-involved he attempts to stage manage a lasting memory with Joanne, using a friend's memory of one of the last things his own mother said to him before she died to lead Joanne into making a similar statement, and his breakup with Paul, which occurs before he even returns to Sacramento, is something that he tries to keep secret because he doesn't want her to worry about him being alone. It's a nice enough sentiment but, at the same time, the woman has cancer and two other kids, one of whom is still in high school; she's got more important things to worry about than you not having a boyfriend. Despite that, there's such a sweetness to Plemmons' performance, and to the gentle and attentive way that David interacts with Joanne, that you're in sympathy with him more often than not. Everything is going wrong for him during this period and at times he seems so overwhelmed with it all that you just want to give him a hug and tell him it'll be okay. It might not be pretty, it certainly won't be perfect, but it will be okay.
Posted by Norma Desmond at 8:00 AM