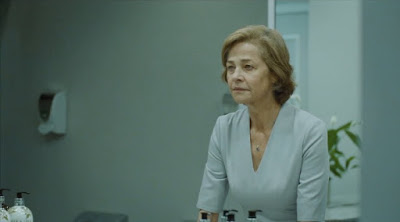 45 years, undone in one week. If nothing else, Andrew Haigh's 45 Years is a searing examination of how fragile one's sense of security, and even one's sense of identity, can be in a long-term relationship. After 45 years, you might think that things really are the way that they are, but truth in this instance is a delicate thing, dependent on the other person being on the exact same page, dependent perhaps on the other person having no significant history before you. Not even love exists in a void - even after 45 years. Wonderfully, patiently directed by Andrew Haigh and exquisitely acted by Charlotte Rampling and Tom Courtenay, 45 Years is a small-scale tragedy and a pitch perfect character study.

Rampling and Courtenay are Kate and Geoff Mercer, a retired couple living happily in a village in Norfolk, planning a party to celebrate their 45th wedding anniversary. This is their second attempt at an anniversary party, the party they had planned to celebrate their 40th having been cancelled at the last minute as a result of Geoff needing bypass surgery. But just as their plans five years ago were disrupted by Geoff's health crisis, so too will their plans this year be disrupted when, a week before their party, Geoff receives a letter from Switzerland. He explains to Kate that they've found the body of Katya, the girlfriend he had prior to her who died after falling into cravasse when they were hiking. Kate is shocked and it takes some time for her to process what he's saying. Who is Katya? His former girlfriend who died, he's told her about it before. Why is he the one being notified that she's been found? Well, they think he's her next of kin because they were under the impression that he and Katya had been married, he's sure that he told her that. Why did they think they were married? Well... they may have told people as much because times were different then and an unmarried couple would have difficulty finding lodging together. Plus, there was that ring that Katya wore...

As more information comes out - some of it shared, sometimes reluctantly, by Geoff, some of it uncovered by Kate - Kate comes to feel increasingly as though a shadow has existed over the entirety of their marriage. As the days leading up to the party come and go, Kate finds herself re-examining the marriage and considering every major decision in a different light, one which includes Katya as a contrast, and Kate and Geoff begin to drift further and further apart. While he retreats into grief that can't include her, discovering that his feelings for Katya have remained whole and preserved, just waiting to come back to the surface, the same way that the glacier has kept Katya's body entirely intact; Kate begins to feel steadily displaced in her own life. For 45 years, she's thought that this quiet, rural life, just the two of them, was something that they had built together. Now she has to wonder, was this really even her life at all?

Based on the short story "In Another Country" by David Constantine, writer/director Haigh approaches 45 Years with a lot of restraint. This isn't a story that is told so much as it is unfurled, the marriage at its center looking solid and strong at first when it's bound, only to show itself as increasingly tattered as it gets laid out. While a lot of things are explicitly said between the characters of Geoff and Kate, particularly towards the end, there are a lot of things that don't get said, at least in words, as well and it's in that balance between candid dialogue and subtle, wordless moments - moments where something flickers in the expression of one of the characters, where something is suggested in the way that the two characters occupy space together or in the way that Haigh frames them - that the film excels. For 95 minutes, 45 Years gives you three artists (Haigh, Rampling, and Courtenay) working at the absolutely height of their abilities, and it's utterly engrossing and compelling.

Yet, while Haigh's graceful direction and Courtenay's solid, purposely closed-off performance are essential to 45 Years' success, the film ultimately belongs to Rampling. As a character, Kate is a tricky proposition. She's upset about something that, by her own acknowledgment, she shouldn't really be upset about. Geoff was in love with Katya before he and Kate ever met. Just as the story of Kate's life did not begin the moment she met Geoff, the story of his life did not begin the moment he met her; they both have histories that exist to the exclusion of the other. And, besides, Katya is dead so it isn't as if Geoff can leave Kate for her. To be angry at him is a bit irrational, and yet anger seems to be the only rational feeling in the face of what Kate comes to believe about herself and the marriage. She married Geoff but he didn't marry her; he married the echo of Katya, the closest he could get to having her back. For 45 years Kate has lived an illusion and now it's all been torn away and she's made aware that the memory of Katya has touched and guided everything in their lives without her knowing it. To watch Rampling as Kate working her way from anger at the information that has been kept from her to resentment that she's been living in this other woman's shadow to sadness that she can't make up the time that she now feels she's lost, is like watching a wave build up and finally crash. It's a shattering performance that gives weight to the film's idea of the past as some ethereal thing forever lingering over the present. 45 Years is a work of great delicacy, but it's also one with great impact.
Posted by Norma Desmond at 8:00 AM

This played at my local cinema a couple of months ago and I went. I had read reviews that called it boring or dull, but I find it hard to believe that I saw the same film those reviewers did. It was amazing. Charlotte Rampling was as good as you said. I was positively enthralled for the whole time, I think the entire audience at the cinema was.

I still think about the film sometimes, and debate with myself over what little things meant.

Truly an excellent film. I'm quite sure I'll be putting it in my top ten list for the year.

Yeah, it's a slow movie (although at only 95 minutes, it's not so slow that you actually feel it) but it's certainly not boring.