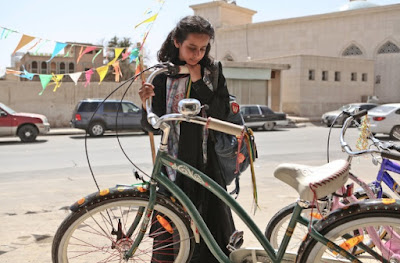 What she wants is so simple that most children would take it for granted: a bicycle so that she can ride alongside her friend. But as a girl in Saudi Arabia, reminded on a daily basis that she’s not to be seen and not to be heard and not to call attention to herself, she might as well want to ride a unicorn to the moon. Hers is a life of restriction and limitation, though not necessarily a life defined by those things. Wadjda is a film that, in certain respects, is typical of its genre, a coming of age story about a slightly precocious pre-teen who has begun carving out an identity as an outsider and has to learn a difficult lesson or two in order to get to the next stage of growing up. What makes it less than typical, aside from the fact that it was helmed by the first Saudi woman to direct a feature length film and the first person to direct an entire feature in Saudi Arabia, is the way that it engages with culture to tell a story that is at once that of a single individual and that of a system of oppression that the individual exists within.

Wadjda (Waad Mohammed) is an 11-year-old girl living with her mother (Reem Abdullah) and whose father (Sultan Al Assaf) only sometimes seems to live with them as he struggles to deal with the pressure from his family to take a second wife and produce a son. Despite the increasing strife between her parents over her father’s pending decision about what he's going to do, Wadjda’s life is one that is mostly happy even as she begins to feel the limits of the societal divide between the genders. Though it is widely known that women do not ride bicycles, she dreams of owning one so that she and her friend Abdullah (Abdullrahman Algohani) can race and has been putting aside money earned by selling bracelets and mix tapes, and by acting as go-between for an older student and her boyfriend, so that she can buy one. Her refusal to take the social rules of conduct seriously have her on the radar of her school’s headmistress, Ms. Hussa (Ahd Kamel), but she is generally unconcerned about what other people think of her and merely wants to be happy.

Despite her efforts, Wadjda is far from her fundraising goal, but when the school announces that there is to be a Qur’an recital contest with a cash prize, she sees her opportunity for a windfall. She joins the school’s religious club and dedicates herself to the task, raising herself in Ms. Hussa’s esteem in the process, struggling to maintain her focus as her home life begins to fall apart. Though her mother’s top priority is keeping her husband from taking another wife, knowing that if he does he will essentially abandon them for the second family he will create, she is also taking steps to test the waters of what life could be like without him. A friend encourages her to apply for a job at the hospital where she herself works, though it shocks her when she arrives to fill out the application and sees that her friend is working with men and with her face uncovered. Her husband would never allow her to work under such conditions, she tells Wadjda, but with him already having one foot out the door, she begins to realize that following the rules about what girls and women should and shouldn’t do is no guarantee to happiness – a realization that benefits no one more than Wadjda.

Filmed in simple, straightforward style, Wadjda is a story tailored largely to the strengths of a novice child actor, not calling for huge emotions but managing to draw moments of subtlety and complexity out of Mohammed and using her innocence to underscore the bizarre and contradictory nature of what it means to be female in her culture. She and the other girls around her are at once urged to be “pure,” to be chaste not only in body but also in presence by not allowing themselves to so much as be seen or heard by men, and yet inherently sexualized by being valued solely for that purity. Although Wadjda is only just starting to become aware of herself as someone who can be viewed in a sexual context, the emphasis of everyone around her on containing her existence is all about her learning to accept responsibility for male sexuality, putting the onus for men’s behavior on her. As written by Haifaa al-Mansour, Wadjda tells a story that never strays far from its sociopolitical concerns but it explores those concerns in a way that is never overbearing. The narrative continually circles back to the issues facing women in a society that is so rigidly patriarchal that a woman can be seen as having lost her “value” if a man she doesn’t know so much as hears her laugh, but it weaves its social commentary so thoroughly into the fabric of the story that it feels natural and never out of place.

From the first, Wadjda is marked as an iconoclast among her peers, her sneakers making for a sharp contrast to the shoes worn by the other girls, and although she’s reminded at every turn about how she’s expected to behave as a girl, she never really lets it affect her and remains firm in her desire to be herself and unafraid to be different. Even when she receives a very public dressing down in the third act, it doesn’t break her. Instead it makes her bold enough to address the hypocrisy of her accuser and, by extension, the society dictating the so-called rules; and strong enough to be disappointed without being defeated. As a character, Wadjda is a solid and compelling figure to build a story around and is brought brilliantly and vibrantly to life by Mohammed and al-Mansour. As a director, al-Mansour brings a light touch to the narrative, forcing nothing and making moments such as the one when Wadjda first lays eyes on the bike she immediately claims as her own – seen strapped to the roof of a van passing on the other side of a wall, so that it looks as if the bike is floating on air – seem magical without losing any of the realism in which the film is grounded. Wadjda is a film which layers strength upon strength and one which leaves a lasting impression.
Posted by Norma Desmond at 8:00 AM