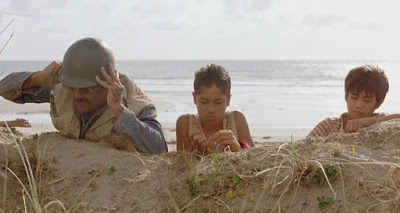 The year is 1984. The place is Waihau Bay, New Zealand. The "boy" in question is Alamein (James Rolleston), known to all simply as "Boy," who holds to two unassailable notions: 1. Michael Jackson is the greatest; and 2. his long-absent father Alamein (Taika Waititi) is a cool guy whose history is full of cool deeds and who is most likely off doing cool things even now. But young hearts are made to be broken by harsh truths, and Boy's is no exception; to grow up is to have some of the comforting illusions of childhood stripped away. So it is in Taika Waititi's well-realized coming of age comedy Boy, an imaginative little gem that is alternately hilarious and heartbreaking.

Aged 11, Boy has already been dealt a rough hand, his mother having died giving birth to his brother Rocky (Te Aho Aho), their father having been away for some time while doing a stint in prison, being raised by their grandmother alongside an assortment of young cousins. Yet, you might not know how rough things are by Boy's attitude, which is open and upbeat, so full of dreams that the fantasies he creates in his mind have become real to him and he tells his unbelievable stories with absolute conviction. His father is coming back, and when he does, they will go to see Michael Jackson live. Shortly after the film begins, Boy's grandmother is called away for a funeral out of town and leaves Boy in charge of the household and the other kids, a responsibility he accepts without second thought, his only worry in life how to get the attention of an older girl at school that he has a crush on.

Things change suddenly when a car comes rolling down the drive one night and Boy recognizes the driver as his father. With him are two fellow ex-cons and the three men set up camp at the house, less grown ups than much bigger children. While Boy puts Rocky on notice that now that their father is out of prison, they'll surely be moving to the city with him, Alamein has his own ideas about what's going to happen. The first is that he's going to find the money he buried in a field just before the cops caught up with him - provided that he can remember where, exactly, in the field he buried it. The second is that he's going to found a gang so that he can surround himself with acolytes and be the boss of everyone around him. At first Boy is charmed and awed by his father, embodying as he does everything an 11 year old might think is cool, but gradually he begins to see the the man in a less flattering light, recognizing him as, at best, a man desperately trying (and failing) to be cool in the manner of a character from a film or TV show and, at worst, a broken and emotionally stunted narcissist not even worth getting to know.

Written and directed by Waititi, Boy is first and foremost a film with really well-drawn characters. To any discerning person, Alamein isn't just a fool, but the worst kind of fool: the kind who thinks he's pulling it off. Fortunately for Alamein, most of the people he hangs around with are kids, so the fact that he's bigger and stronger and old enough to drink and smoke is enough to make up for the fact that more often than not he's making himself look like an inept idiot. His immaturity and his selfishness makes him relate to Boy more as an older brother than as a father (and, indeed, he tells Boy not to call him "Dad" but to call him "Shogun" instead), but his abdication of the official authority that comes from taking responsibility for the care of someone else is ultimately what makes it easier for Boy to begin to see beyond the flashiness to the actual substance (or lack thereof) within. The narrative trajectory of the film isn't so much about Boy growing up, though he does grow over the course of the film, but about him recognizing that his father never grew up and isn't the sort of man that he should aspire to be. That the film itself is able to be so clear-eyed throughout while telling the story from the point of view of someone who is so starry-eyed for much of it is one of Boy's greatest strengths as a movie and Waititi's as a storyteller.

Waititi's performance as Alamein/Shogan is also exceedingly solid as he goes all in as he brings the character to life. Alamein isn't a bad guy necessarily, he has affection for Boy and Rocky, it's just that he's so self-involved that most of the time it doesn't seem to occur to him to think of them instead of himself; and by the end you almost feel bad for him because he's such a sad character. As Boy, Rolleston delivers one of those performances that comes along every once in a while and shocks you with how nuanced it is given the age of the actor. This is particularly true in the second half of the film, when Boy begins to feel disillusioned by his father and angry with him for failing to live up to the figure that Boy has created in his imagination. It's a performance that flows perfectly with the shifting mood of the film, which is at various times funny, fanciful, and quite sad. I'd never heard of Boy before catching it by chance on TV, but I couldn't recommend it more. It's one of the hidden cinematic treasures of recent years.
Posted by Norma Desmond at 8:00 AM