Canadian Film Review: Into the Forest (2016) 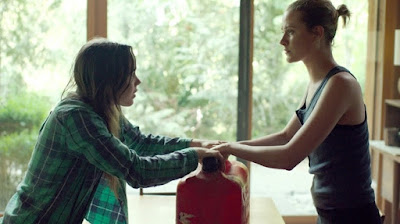 If all technological infrastructure (which, at this point in time, is basically all infrastructure) were to fall in an instant, how long would you keep holding out hope that it will come back and life will resume as normal? A week? A month? Surely not a year and change. Honestly, even a month sounds like pushing it, no matter how naive you might be. I suppose that was at the heart of my problem with Into the Forest, an intimate portrait of the apocalypse. I can buy that one would cling to the normal and the familiar for comfort for a while, but at a certain point you have to concede, because time has passed and because you've seen first-hand how things were already coming apart after only a few days, that your old way of life is gone, so you should probably stop spending so much time rehearsing for that damn dance audition that's never going to happen and start devoting more time to figuring out your food and shelter situations.

Into the Forest begins sometime in the not-distant future, with a family that has retreated out to a remote, rural area deep in the woods, but without sacrificing their connection to technology. The father is Robert (Callum Keith Rennie), a widower with two daughters, Eva (Evan Rachel Wood) and Nell (Ellen Page), the former an aspiring dancer deep in preparation for an important audition, the latter a high school student studying for her SATs. Shortly after the film opens, the power goes out and stays out. Because the family is so far out, the only way to get into town is by car, but trouble with their only vehicle prevents them from doing so for the first few days of the outage and when they finally get to town, they find it on the verge of being abandoned. The dance class that Eva attends is still in session, Nell's friends still gather together on the outskirts of town, people they know are still kicking around, making the best of things, but there's an ominous pall over everything, a sense of impending anarchy.

Sensing the mood that's beginning to descend during their foray into town for supplies, Robert declares when they get home that they won't be going back for a while, that they'll wait things out. But soon his life is lost in an accident, and the period of waiting proves endless. When even the radio stations go dark, it seems clear that things aren't about to get better, but Eva and Nell steadfastly remain where they are, their food supply dwindling, the roof, already in the process of being repaired before everything went sideways, deteriorating, with no real plan about what they're going to do. A plan, of sorts, presents itself when Nell's boyfriend, Eli (Max Minghella), makes the long trek out to their house and tells them of a rumor that there's power in Boston (where this rumor originates is something of a mystery, given the radio airwaves are dead) and that a group of people is planning to make the long journey there immediately. Eva questions the wisdom of the plan, pointing out that heading out right away would mean trying to travel through winter, and refuses to go and Nell finds that she cannot leave Eva behind. So they stay. And stay. And stay.

Adapted from the novel by Jean Hegland, Into the Forest is a mixed bag of things that work and things that don't. The things that work include the performances by Wood and Page - the latter of whom can still somehow manage to pull off playing a teenager a decade after Juno, not necessarily by looking that young but by successfully conveying that youthful sense of guileless optimism and wonder - both as individual characters and in terms of their interactions together, which find them alternating between supporting each other and working together and squabbling like brats when one does something selfish (like wanting to use what little gasoline they have to power the generator for the purpose of having actual music to rehearse to rather than a metronome, or finding a piece of chocolate and furtively eating the whole thing even though it's been 15 months and they're both starving). Rennie is also good as their father, believable as a man who is practical and capable and good enough at enough things to convince himself that he can self-sufficiently ride out whatever is going on, were it not for the accident that ends his life. Casting-wise, the film is excellent, which is good because it's insular nature means that it leans heavily on its actors.

The film also does an excellent job of establishing the feeling of society on the cusp of changing, with director Patricia Rozema effectively projecting a sense of the sinister in that brief excursion into town, including an absolutely gorgeous shot of the family's car disappearing back down the road towards home, the headlights like a little halo keeping it from being totally swallowed up into the darkness. The characterization of Eva and Nell's need to stick to their routines and the tasks that are normal to their everyday lives in order to stave off panic and convince themselves that they'll get through is also well done at first. Where the story falters is in having them continue in that way even after so much time has passed, and in failing to provide a firm enough sense of their interior lives to justify that kind of passivity in the face of oblivion. As a result, the film is at its most interesting exactly as it is ending, when the two are finally forming a plan and making a move, which is particularly frustrating. While Into the Forest definitely offers a different point-of-view from the increasingly dime a dozen "after the fall of society" stories, it doesn't manage to do quite enough with its premise to separate it from the pack of similarly-themed movies.
Posted by Norma Desmond at 8:00 AM