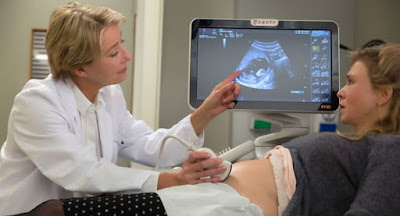 When it comes to Bridget Jones's Baby, I went through a few distinct stages in terms of reaction before actually seeing it. The first, back in 2015 when filming was announced was "... Why?"; the second, when the trailers hit earlier this year at the beginning of the summer of blah sequels, was "Hmmm, maybe when it comes to Netflix"; the final stage, during the couple of weeks before its opening weekend, was "Screw it, why not?" And you know what? I'm glad I did. I wasn't asking for another Bridget Jones sequel, I wasn't waiting for another Bridget Jones sequel, I don't even actually remember the first Bridget Jones sequel (though I know that I saw it), but I really enjoyed this. It was really funny and it does something that more sequels should do in that it actually allows its main character to grow and rather than getting its mileage by repeating the same gags from the first film but bigger (though, naturally, there are some call backs), it takes the opportunity to explore some new territory.

11 years after the events of the first film (but 15 in real time), Bridget (Renee Zellweger) is still single, though she's no longer surrounded by "smug marrieds" but just "marrieds" as her friends Sharon (Sally Phillips), Jude (Shirley Henderson), and Tom (James Callis) have all settled down and started families, providing her with a small army of godchildren. It's at the christening of one of these children where Bridget reconnects with ex-boyfriend Mark (Colin Firth), though in the cold light of morning she's forced to reflect on their past and realizes that nothing has fundamentally changed because work will always come first for Mark and he'll always be leaving her to go off and save the world. She resolves to move on, but things are complicated when she realizes that she's pregnant. They become more complicated still when her doctor (Emma Thompson, who co-wrote the screenplay) is unable to pinpoint the date of conception, leaving it up in the air regarding whether it was her night with Mark that resulted in her pregnancy, or a one night stand she had a few days before while attending a music festival. The man from the festival turns out to be Jack Qwant (Patrick Dempsey), the founder of a popular dating app, with whom she reconnects after stealthily attempting to get a DNA sample from him by arranging for him to be interviewed on the news program that she produces.

When the two men learn that Bridget is pregnant and that either one of them could be the father, they handle it with more grace than might be expected, especially considering that when Bridget tells each of them separately about her pregnancy, the conversations quickly get away from her so that she feels too awkward to follow up the first announcement (the pregnancy) with the second (the paternity being questionable), so that each man spends a not inconsiderable amount of time thinking that he's definitely going to be a father only to find out that he might not be after all. Once the cat is out of the bag, the three proceed through the rest of the pregnancy together, with Mark and Jack competing for supremacy in Bridget's life, as if the decision about which of them will turn out to be the father is at all in her hands, and Bridget trying to decide what she wants for her future. Does she want to embrace the unknown by trying to create something with Jack, with whom she is very compatible on paper, or does she want to give things another chance with Mark, even knowing that they're still the same people they were when the relationship didn't work in the first place?

There's nothing particularly necessary about Bridget Jones's Baby, but there's nothing particularly necessary about any other movie ever made either, and there's something rather pleasing about it as a film, a facility with the characters and the material that is easy to embrace. In the months leading up to the film's release a lot was made of Zellweger's appearance, which is indeed different, although not as distractingly or earth-stoppingly so as the melodramatic musings of people like Owen Gleiberman might lead you to believe. You know who else looks different? Firth, in ways that seem particularly pronounced when his appearance here is juxtaposed against his appearance in Bridget Jones's Diary via flashbacks (too many flashbacks, if we're being honest; I feel pretty confident that no one who sees this movie will do so having not seen the first). We are all, in fact, 15 years older than we were when the first film came out (except the characters, who are actually only 11 years older). It's not that big a deal, especially when you consider that Bridget herself is different, more mature, in this movie. While the Bridget of the first film was someone anxious about being alone and someone often trying to live less as herself than as an image of herself that she's created in her mind, a version more glamorous, more clever, and more together than she actually is; here Bridget is someone more comfortable in her own skin, not really anxious about her single status (even during a stretch where it appears she might end up alone, despite having two suitors), not trying to be someone or something that she isn't. She's grown up, in other words, and stopped worrying so much about the petty, inconsequential things and become more relaxed about being herself, imperfect though she might be.

Yet while Bridget has matured, she still remains recognizably herself, slightly less than graceful, prone to putting her foot in her mouth, but ultimately rather lovable. Likewise, while the series has grown up a bit, it's still recognizably itself, opening with a playful riff on one of the most famous scenes from the first film and featuring a scene towards the end which feels equivalent, in a physical comedy way, to the fight scene from the first. While at 2 hours it's just a smidge too long, and it certainly could have done without the finale fake out, Bridget Jones's Baby is a film that ultimately works. Zellweger and Firth slip back into their characters like a pair of comfortable shoes, with Zellweger in particular reminding that despite being an Oscar winning movie star, she's still fully capable of embodying the everywoman and doing so with understated charm. While Dempsey, as the third point in the story's triangle, is a weak link, never quite seeming to settle on whether Jack actually feels a genuine connection to Bridget or whether Jack simply trusts the mathematical algorithm that he's built and which tells him that he and Bridget are compatible, the presence of Thompson as Bridget's deadpan doctor makes up for it (I don't have a mathematical algorithm to back it up, but I'm pretty confident that Emma Thompson makes everything just a little bit better). Whether Bridget Jones's Baby can become the romantic comedy touchstone that Bridget Jones's Diary is remains to be seen, but I'd say it deserves such status.
Posted by Norma Desmond at 8:00 AM