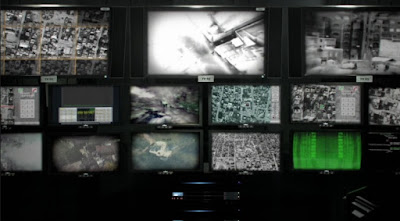 While I don't think that any one documentary could ever capture the Israeli-Palestinian conflict in a way that feels full and complete - the history there is too complex, too thorny, too fraught - a film like Dror Moreh's The Gatekeepers goes a long way towards clarifying a piece of that big puzzle. Centered around interviews with six of the former heads of the Shin Bet, Israel's internal security service, and addressing some of the most controversial incidents between Israelis and Palestinians since the Six-Day War, the film is a fascinating look at what power looks like from the perspective of those who have held it, as well as how people who have held the same job can see it in such different ways and yet can come to virtually the same conclusion about how things have to work in order to move forward.

Moreh divides the film into seven sections, six dealing with major events in the history of Israel and the Shin Bet, such as the occupation of the West Bank and the Gaza Strip following the Six-Day War, the Bus 300 affair during which two Palestinian bus hijackers were executed, the fallout from the Oslo Accords, the assassination of Yitzhak Rabin, the Second Infitada, and the assassination of Yahya Ayyash, and the seventh dealing more broadly with the Shin Bet and its impact on Israel; and builds it around interviews with former Directors Avraham Shalom (1981-1986), Yaakov Peri (1988-1994), Ami Ayalon (1996-2000), Avi Ditchter (2000-2005), and Yuval Diskin (2005-2011), who provide context and opinion about the events being discussed, with each man obviously having the most to say about the events that occurred during his own period in power. The interviews are fleshed out by archival footage, computer animation, and a framing device in which Moreh uses a room full of video screens, as if from a surveillance hub, as a means of creating segues between events.

For the most part, the film treats the interviewees in the same way, their personalities as individuals never really coming across, with most of them giving the impression of being so far over it as to seem almost laid back while discussing some of the most important and tragic events in their nation's history. The exception is Shalom, whose personality becomes part of the topic of discussion when addressing the events of his tenure. Although no one comes right out and calls him corrupt, the impression is given that he felt he had carte blanche to do whatever he decided was necessary without any sense of accountability (he himself helps give that impression, characterizing the execution of two Palestinians as only being a big deal because the press found out), and the film makes a point of subtly singling him out, often simply pausing on the image of him sitting in the interview chair while certain things are discussed, implying that he's answerable for them without directly stating as much.

Ultimately, though, The Gatekeepers isn't about any one man and what he did or didn't do, but about how a situation that was already pretty bad has managed to get progressively worse over the course of four decades. It's said that the definition of insanity is doing the same thing over and over again and expecting a different result, and the film argues that that's what Israel has been doing, vis a vis Palestinians, for decades as a result of fear and/or passivity on the part of Prime Ministers since Yitzhak Rabin and the influence of the religious right in dictating policy regarding Palestinians. While you might expect, given the level of power the men attained, that the film would be overly supportive of the Israeli government and its actions, the film is pretty far from propaganda and the men offer views of the situation that feel surprisingly objective. In fact Shalom, who it should be granted states that after being forced to resign as director of Shin Bet ceased trusting politicians, goes so far as to compare the Israeli occupation of the West Bank to the Nazi occupation of various European countries, clarifying that he's not comparing the actions of Israel to the Holocaust, but rather comparing how Israel has treated Palestinians to the way that the Nazis treated the Poles, Czechs, and Dutch during their occupations of those places.

Perhaps the most surprising thing about The Gatekeepers, though, is that all six men agree that the occupation of the West Bank is counterproductive and that the only way to move forward is for Israel to negotiate with the Palestinians and perhaps give some things up in exchange for peace. The film makes a compelling argument in that regard, though it does so in a way that requires the viewer to have a decent amount of knowledge regarding Israeli history going in. The film hops around a bit in the timeline of events and doesn't provide a ton of background information for any given event or subject, which is a shame since the film only runs to 101 minutes so it probably could have devoted a few extra minutes to providing further context without slowing it down too much. Still, The Gatekeepers is nevertheless a thought-provoking and very interesting documentary that ought to be seen.
Posted by Norma Desmond at 8:00 AM