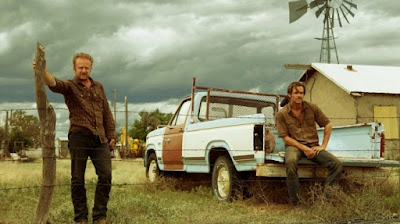 "We rob banks." Amazing how a movie set during the Great Depression and one set during the present day can paint such similar pictures of an area economically sucked dry and abandoned and a whole population of people who, for generations, have been stuck in a cycle of poverty because the system is rigged to ensure that they always get the worst of it when corporate greed grinds everything to a halt. It's enough to make you sympathize with and fall on the side of the bank robbers, except that Hell or High Water's grizzled, mustachioed lawman is played by Jeff Bridges, putting its bank robbing brothers at a disadvantage compared to Bonnie and Clyde. A hard edged crime movie that grabs you right from its beautifully executed opening shot and doesn't let go until the closing credits, Hell or High Water is one of the year's great thrill rides.

The brothers at the center of the storm are Toby (Chris Pine) and Tanner (Ben Foster), the latter an ex-con who's been out of prison for a year, the former a divorced father of two struggling to support his children and to keep the family ranch left behind by his mother from being foreclosed on. Together the two set out to rob a series of banks, all of which are supposed to be branches of the same bank, all of which they take for relatively small amounts, demanding merely the bills in the till in denominations of $20 and under and then making their hasty exit. They ditch their getaway cars by burying them on their mother's property and then get ready to hit the next bank, in the next town, with the next stolen car. They've got their process down to as much of a science as they can in light of both the natural variables (such as customers being present when they hit a bank, or a branch turning out to be closed) and the variables created by Tanner's hair trigger temper and recklessness, and their plan for laundering the money in order to keep their cash from being traced back to the various banks is fairly ingenious. But with foreclosure of the ranch looming, they're desperate enough to take chances, opening themselves up to costly mistakes.

Hot on their trail is a pair of Texas Rangers, Marcus Hamilton (Bridges) and Alberto Parker (Gil Birmingham), the former on the verge of retirement and happy to get to go out with an adventure, the latter gritting his teeth as he endures Hamilton's endless ribbing. While the Rangers follow in the robbers' wake for the first couple of robberies, Hamilton puts the pieces together and recognizes a pattern in what they're doing, allowing him to narrow down the list of potential targets to follow. He and Parker set up shop and wait, plotting to catch the robbers in the act, and while they're killing time, Toby and Tanner take a slight detour so that the former can try to clean up his messy personal situation a bit before the brothers go and finish what they've started. When they head back out, things start to go sideways, with a series of things going wrong and resulting in a burst of violence in an otherwise unassuming stretch of West Texas.

Directed by David Mackenzie from a screenplay by Taylor Sheridan, Hell or High Water wastes no time in establishing both the urgency of its narrative and the desperation of its setting. It begins in one dusty, half-dead town and then takes a tour through several more, pausing occasionally at the brothers' family ranch, which is dilapidated and in a state of despair. Everywhere the film follows its characters is a place that's getting left behind as the economy gets smaller and the few get the biggest share, leaving the many scrambling for scraps. It's a film with a lot of sympathy for Toby and Tanner, characterizing them as doing the wrong thing for a reason that can be argued as being right, but which tempers that both by making it clear that Tanner is also doing what they're doing because he likes breaking the rules and seizing small spurts of power through violence, and by giving equal narrative weight to the Rangers chasing after them who are left to deal with the people traumatized by their encounters with the brothers.

Sheridan's screenplay is truly a thing of beauty, balancing intricate plot work against full-bodied character work. The scope of the plot is parceled out gradually as the film unfolds and in such a way that it doesn't feel as though the movie is ever stopping cold to dump a bunch of exposition out, and the decision to divide the film between its two prickly pairings is a smart one that gives the film shadings of both dark comedy and deep pathos. While much is provided for simply on the page, Mackenzie's lively direction and the four principal performances take Hell or High Water the rest of the way. Pine has never been better than as the broken down Toby, who has been kicked around his entire life and just wants something better for his kids, and Foster, who always seems to be on the verge of breaking out as an actor, brings a crackling energy to his character, who at any given moment might stick to the plan or might do something completely reckless that throws everything off kilter. Over in the other pairing, Birmingham brings a quiet forbearance to his role that makes the character more than Hamilton's target for needling, and Bridges infuses his character with weathered charm, making him a man who can only express affection by acting like an asshole and whose relaxed, easy manner draws people out and into conversation even when they're at their most guarded. Bridges' performance, like the film itself, is one of the year's cinematic highlights.
Posted by Norma Desmond at 8:00 AM