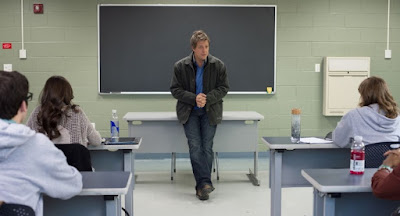 Early in The Rewrite the protagonist, a once celebrated Hollywood screenwriter who has fallen on hard times, complains that he can't sell any of his story ideas because all anyone wants to make are stories about female empowerment. Lord, please tell me where this crowded marketplace of movies about female empowerment are, because as far as I can tell it's white male protagonists as far as the eye can see. If you can ignore the fact that the film is premised on a problem (if a rise in the number of films about women can be seen as a problem) that simply does not exist, then The Rewrite is a pleasant enough diversion. It's somewhat sleepy overall and not nearly as much fun as previous Marc Lawrence/Hugh Grant collaborations Two Weeks Notice and Music and Lyrics (I have no idea about Did You Hear About the Morgans?), but it's decent enough for what it is.

As the film opens, screenwriter Keith Michaels (Hugh Grant) is about a decade and a half removed from his greatest (and, perhaps, only) triumph as a writer for the film that won him an Academy Award and struggling to sell a new story to mostly disinterested studio execs. In dire need of some cash, he caves and agrees to a job that his agent has arranged for him as a writer in residence at Binghampton University in upstate New York. He embraces this change with all the enthusiasm of someone who has just been exiled to Siberia, complaining about the weather and about how small and socially dead the town is compared to the cosmopolitan lifestyle he's accustomed to, but mostly grumbling about how writing is something that can't be taught. That being his philosophy, he has absolutely no intention of actually teaching his class, and rather than reading the 70 submissions from students in order to choose the ten who will get to take the class, he simply looks up each student's profile in the University database, chooses eight girls he thinks are hot (which, when you think about it, doesn't actually make sense since his intention is merely to tell the students to take a month off from attendance to write the rest of their screenplays - if he's not intending to spend any time with them, what does it matter what they look like?) and two guys to balance things out, then calls it a day.

While Keith likes to lay the blame for what's become of his career at the feet of everyone else, citing a shift in culture towards stories about "kick ass women" that leaves the kinds of stories that he wants to tell looking out of vogue, the evidence on display suggests that his biggest problem is his inherent laziness. He has no desire to be a teacher, which explains his laziness in that respect, but he's also lazy with respect to his personal life, falling into bed with the first comely student who bats her eyes at him and then letting her drive and dictate the brief relationship that follows, letting his relationship with his son lapse to the point where they haven't spoken in a year, and being willing to just give up on the teaching position (at the point where he's started to like it) when he finds that he might have to fight to keep it. One of the keys to good storytelling is a having a protagonist that wants something, which gives the narrative urgency and the character purpose. But what, exactly, does Keith want, except to continue dining out on the success of the one film he wrote that everyone liked? It's hard to say since he doesn't really work for anything through the course of the film, with even the vague premise for a sequel to his famous film being cobbled together from ideas expressed by his students.

Because Keith is played by Grant, and during the tail end of the phase in his career where he specialized in rascals and ne'er do wells, I was expecting The Rewrite to take a dark turn towards the midway point, with a desperate Keith taking advantage of his proximity to fresh new ideas and using them for his own gain, ushering in a third act of disgrace, repentance, and redemption, but the stakes of the film turn out to be much lower. If Keith is to be redeemed it won't be through doing something terrible, suffering the consequences, and coming out the better man, but through the lessons he learns via interactions with two women. The first is Mary Weldon (Allison Janney), the hardass head of his department and of the university's ethics committee, whom he insults on their first meeting and to whom he eventually has to make nice with in order to keep his job. The second is Holly (Marisa Tomei), a single mother who becomes one of his students and whom convention, if not chemistry, dictates will be the woman he falls for after she goes to the trouble of explaining the very simple things he needs to do (call his son; talk about the process of writing in the class he's teaching) to get his life back together.

It's the great irony of the film that Keith, who laments that he's been pushed aside because he's not telling stories about kick ass women, finds himself in a story where the only means by which he seems to be able to move forward is when one woman or another gives him a kick in the ass. As a character, Keith doesn't really amount to much and the film itself is fairly perfunctory, presenting a love story where all of the actual obstacles (and, really, everything about Holly's life aside from her dynamic with Keith) remain and resolve themselves off screen. Despite that, The Rewrite does have its charms and it's refreshing to see an age appropriate relationship in a Hollywood movie, even if Grant and Tomei don't have the chemistry to make Keith and Holly seem like anything other than two people destined to be really good friends. It's a low stakes comedy, but it never pretends to be anything else, so hard on it can one really be?
Posted by Norma Desmond at 8:00 AM