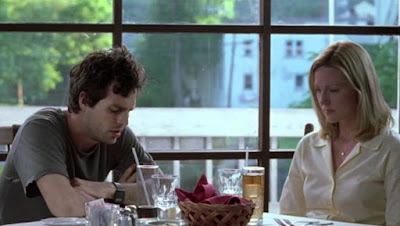 A movie like You Can Count On Me puts other films of its kind to shame. It's a story about a single mother whose brother drifts back into her life where the small town that serves as the setting is not full of aggressively quirky neighbors, where the child is not precocious, where the story does not revolve around the brother being charmingly unconventional and shaking up the life of his uptight sister for the better, showing her that it's okay to bend the rules. Instead the brother is a wanderer who even at the end can't quite get it together and the sister is stable but deeply flawed; they're both screwed up in their own specific ways, and her kid is stuck in the middle as they try to get themselves sorted out. They're ordinary people and their problems are ordinary, but it's that ordinariness, so casually and comfortably captured by writer/director Kenneth Lonergan, that makes them and the film so compelling. There's a plot, but it doesn't feel forced; it feels like some perfectly natural thing that's playing out in other houses, in other families, anywhere in the world. You Can Count On Me just is, and it's a film so well-executed that it feels absolutely timeless. 16 years on, it doesn't play like it's aged so much as a day.

The siblings at the center of the story are Sammy (Laura Linney) and Terry (Mark Ruffalo), who were orphaned when they were children. While Sammy has stayed on in the town where they grew up, and in the house that once belonged to their parents and which she now shares with her young son Rudy (Rory Culkin), Terry has long since left town and lives an itinerant life, only returning when things are dire and he needs to borrow money from Sammy. So it is once again, though in the period leading up to Terry's arrival Sammy allows herself to believe that this is a visit without ulterior motive, that perhaps Terry has finished his wandering and has decided to return home and finally set down roots. However, it only takes about ten minutes (despite Terry's assertion to the girl he's sort of seeing that he'll have to stay in town a couple of days because he can't just immediately ask for money) for the truth to come out, including the fact that Terry was out of touch for a while because he was in jail in Florida, and for the happy sibling reunion to descend into passive aggressive silence (Sammy) and defensive self-pity (Terry). Despite that, Terry does end up staying on for more than a few days, getting to know his nephew, his relationships with both Sammy and Rudy ebbing and flowing depending on how entrenched he becomes in a victim position in any given situation, while Sammy's outwardly orderly and staid life becomes complicated when she begins an affair with her married boss (Matthew Broderick).

What rings particularly true in You Can Count On Me is the way that things aren't ever really "solved" between Sammy and Terry. The crux of their relationship is the fact that she's always going to be slightly disappointed because she feels like she puts all the actual effort into maintaining their connection, while he's always going to feel slightly resentful that she can't just let him live his life and do his thing without being called out on how self-centered he's been. The prickly vulnerability that Ruffalo brings to his performance makes Terry alternately exasperating and worthy of pity because it's not so much that he wants to hurt other people as that he doesn't stop to think that what he's doing (or not doing) might cause someone else pain, and when it's brought to his attention that he's messed up he does genuinely feel bad about it, yet that remorse is usually of the self-pitying variety. He feels bad about what he's done, but mostly he feels sorry for himself that he's been made to feel bad about doing it. For her part, Sammy keeps getting frustrated by the ways that Terry lets her down (by having Rudy lie to her, or reneging on a promise to take Rudy fishing, or taking Rudy to meet the father who has disavowed him), but she continually feels compelled to give him more chances because she believes in his potential to not be a total fuck up (by actually remembering to pick up Rudy after school, by spending time with him and bonding with him) - and, as it turns out, she's not exactly perfect either.

You Can Count On Me functions as an examination of how two people can come from the same circumstances and yet be so different and want such wildly different things. Sammy is a "keeper," saving every piece of correspondence Terry has ever sent, saving the house they grew up in, trying to maintain a sense of family for Rudy to grow up with and for Terry to return to. Terry is the opposite, bristling at the notion of being held down anywhere and by anything, determined not to stay in one place and decidedly unsentimental about where he grew up. It would be easy to simplify things by saying that Sammy is the "good" one and Terry is the "bad" one, but Lonergan doesn't go for that characterization and instead suggests that in their youth the two were a lot more alike and that the difference now is more to do with the fact that Sammy (by necessity, because of Rudy) has matured at a faster rate than Terry. The history between the two characters, and in particular the way that they have diverged onto separate paths, plays a significant role in the story's central conflict and the lived-in feeling of that relationship, and of the performances by Ruffalo and Linney, is what makes the film resonate so deeply. Sammy and Terry are characters that feel real, who grow and regress and grow a little bit more through the course of the film without miraculously changing who they fundamentally are at the end. The ending can be called a happy one, but it's happiness that comes as a result of compromise, and it's an ending that doesn't "fix" everything. It's open-ended and just a little bit messy, which is exactly how it should be. You Can Count On Me is a film that never really got its due at the time of its release (it received 2 Oscar nominations; by my count it should have had 5), but it was and remains an absolute gem of a movie.
Posted by Norma Desmond at 8:00 AM