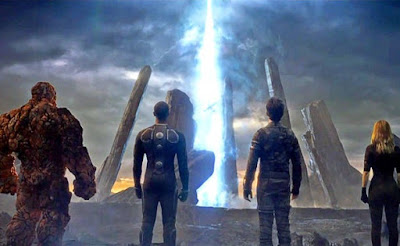 It's always interesting to go back and watch a film that came out not just to bad reviews, but to the kind of critical pile on that makes reviewers seem less like people and more like sharks who smell blood in the water. When Fantastic Four was released at the end of the summer of 2015, rebooting the lackluster two film series that starred a pre-Captain America Chris Evans, people didn't just dislike it; they reacted to it as if its very existence was offensive to them. Seeds of contempt had already been planted long before the film's premiere, when the casting of Michael B. Jordan as Johnny Storm/The Human Torch inspired racially tinged ranting from the corner of the internet where all of the most special and sensitive snowflakes reside, and it's possible that some of those people went into the film wanting to hate it merely to justify their own entitled idiocy, while others merely swam with the tide and then floated along the currents of disdain. By the time 2015 came to a close, Fantastic Four had been counted as one of the worst movies of the year, coming in at #614 out of 639 films ranked by Metacritic for the year. Seeing the film in 2016 is to wonder what all that fuss was about. Fantastic Four is not a good movie but, good lord, it is not quite the abomination its reputation might have you believe.

Now, Fantastic Four may not be an abomination, but that's not to say that there isn't plenty here to be critical of, first and foremost being how the film chooses to manage its running time. At 100 minutes, it's one of the leanest superhero movies of the past few years, but it also spends the most time on the things that should have been cut down for time, and the least amount of time on the things that people actually come to superhero movies for. It starts with a prologue which might as well be called "Fantastic Four Babies" (or, rather, Fantastic Two), going all the way back to the childhood of Reed Richards and Ben Grimm to show how they became friends. Possessing an extraordinary intelligence, at a young age Reed is already in the process of building a teleporter, which he and Ben will complete once they're in high school. The invention garners the attention of Franklin Storm (Reg E. Cathey), who invites Reed to join the Baxter Foundation and help complete a Quantum Gate that's being built and which will create access to a parallel dimension. The rest of the team working on the gate consists of Franklin's children, Sue (Kate Mara) and Johnny (Michael B. Jordan), and the brilliant but volatile Victor von Doom (Toby Kebbell).

Once the gate is completed and a test has been performed sending a monkey into and back from the other dimension, the team is disappointed to learn that the government intends to use a group from NASA to make the first official expedition to Planet Zero. Unwilling to accept that they can't go, Reed, Johnny, and Victor decide to take a secret after-hours trip to the other dimension and Reed calls Ben to come to New York to join them. It's all in good fun at first, but shortly after they arrive things begin to go awry, resulting in Victor seemingly falling to his death and Reed, Ben, and Johnny being brought back with the assistance of Sue (left behind in New York and discovering after the fact that the boys have gone through the gate). But the experience has consequences that none of them could have anticipated and which leave them transformed, with Reed having the ability to stretch like rubber, Sue having the ability to become invisible (appropriate, seeing as none of the guys even thought to invite her to come with them), Johnny having the ability to become engulfed in flame and fly, and Ben becoming covered in rock and developing super strength. Together they will form a team that will use their extraordinary power to help people and make the world a better place... eventually. We don't really get to see that part, though.

To be fair to the film and to its much maligned director/co-writer Josh Trank, there's a compelling story to be told about people who suddenly find themselves possessed of superhero abilities, about the psychological toll that transition takes, about the process of learning to master and control those abilities, and about the choices that must be made in terms of how and for whom to use those abilities, and there is a stretch where that is the story the film is attempting to tell. After the trip to Planet Zero, the four heroes wake up in a government facility where they are being kept for study and safety. Reed reacts, not unreasonably if he's ever seen a movie where someone finds themselves confined to a top secret government facility, by panicking and fleeing, managing to stay hidden from the government for a year. The other three, but particularly Ben, are deeply affected by him abandoning them, while also dealing with their own issues. Sue and Johnny are at odds over his recklessly rushing into dangerous situations without first considering the consequences, and Ben is despondent over being turned into a "monster" and overcompensates for the scariness of his outward appearance by trying to be as helpful as possible, allowing himself to become a weapon for the military. When Reed finally returns, he has to contend with his guilt about what has become of Ben, as well as his guilt over running away and leaving his friends behind. These are character beats worth exploring and the young actors assembled to play them are more than capable, but after spending a not-inconsiderable amount of time playing at being a psychological drama, Fantastic Four suddenly decides that it wants to be a different, more traditional kind of superhero movie, resulting in a truncated finale which is totally out of step with everything that came before.

Fantastic Four is a film created in a famously volatile set of circumstances in which Trank battled for creative control with producers and the studios, which surely goes a long way to explaining why it's so disjointed, though it's still puzzling that the studio thought the solution to Trank's cerebral, almost anti-superhero vision was to graft 30 minutes of nonsensical action onto the end. Yes, that's right: with virtually no set up for it, the film decides to use its last 30 minutes to burn through von Doom's return (as, simply "Doom"), his plot to destroy the world, and the four heroes learning how to work together to defeat the enemy and save the world. It's weird. It's weird because it happens so suddenly and then is over so fast. It's weird because it adopts a different tone than what came before. It's weird because the film's first act devotes a few moments to establishing that the reason von Doom returned to the Baxter Foundation to finish the gate was so that he could be close to Sue, for whom he has unrequited feelings, something which the grand finale acknowledges but then chooses not to do anything with, as Doom shows absolutely no hesitation in trying to kill Sue right along with the rest of the heroes. While the big battle between good and evil is the major selling point of superhero movies, when it unfolds in as perfunctory a fashion as it does here, the only possible reactions are disappointment and confusion.

There were too many cooks involved in Fantastic Four and it shows. Its failure as a summer "tentpole" movie may be the result of Trank wanting to take the property and use it for an intimate exploration of the psychological toll of becoming a superhero, something which even if narratively successful was never going to be financially successful enough to justify the film's $120 million budget, but its failure to be a successful film is pretty clearly the result of the studio panicking about the film that Trank put together and scrambling to add things in to "fix" it and make it more commercially viable. What they ended up with is a mess, a piece battling against itself over what kind of movie it's going to be. Fantastic Four is not a good movie - it couldn't be under these circumstances - but, despite the vicious reaction it inspired, it's not an abjectly terrible one either. Mostly it's a just wasted opportunity with brief flashes of the good movie it might have been if not for its behind the scenes drama.


Should It Have Been A Blockbuster?: Oh, this was never going to be a blockbuster. Not a chance.
Posted by Norma Desmond at 8:00 AM

Agreed, this was never going to be a Blockbuster. I do think it is abjectly terrible, though. I say that because almost none of the pieces actually worked.

Yeah, that's fair. I found bits and pieces of it engaging, but even if Trank had been able to present a cohesive and coherent "burden of super powers" type story, it would have been at best something of a curiosity. Certainly it was bound to disappoint Fantastic Four fans, since Trank doesn't seem particularly interested in telling a super hero story in any sort of traditional sense.