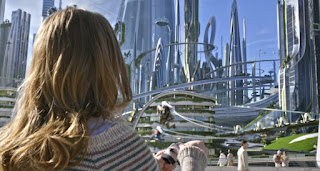 It seems only appropriate to start off a new series of "not-busters" with the first high profile disappointment from the summer of 2015 (a year which seemed to be full of summer movies that failed to live up to expectations), one which also raises the question of what truly makes a movie a "bomb." Tomorrowland made almost $100 million in the domestic market alone, which is not only a lot of money, but is enough money to make it the seventh highest grossing film in star George Clooney's filmmography (behind Gravity, The Perfect Storm, all three Oceans movies, and Batman and Robin). If you consider the film in terms of Clooney's historical box office draw, then Tomorrowland is actually kind of a success, because Clooney's films average a gross of about $61 million. If, however, you consider the film's success in terms of its box office against its budget and marketing costs, then Tomorrowland is clearly a failure. It cost $190 million to make and only brought in $93 million at home, and even when you account for the gross from foreign markets, it still didn't recoup its costs. As a product, it's a failure absolutely, but as a piece of art, I think it's better than its reputation (despite some questionable thematic elements).

Tomorrowland is a film that isn't shy about wearing its message on its sleeve. Centering on an inventor who has given up on the world, a plucky teenager who wants to fix the world, and a parallel dimension where a place called "Tomorrowland" has been built with the intention of nurturing the greatest scientific minds the world can produce, the film, co-written by Brad Bird (who also directs) and Damon Lindelof, hardly lets a scene go by without restating its mission statement: the world isn't perfect, but simply complaining about it isn't going to fix it. The girl is Casey (Britt Robertson) who, seemingly alone among all the people around her, refuses to embrace the apocalypse as inevitable and instead wants to be proactive and take steps to change the disaster course the planet seems to be on. Her efforts do not go unnoticed and she's selected for recruitment by Athena (Raffrey Cassidy), a robot from Tomorrowland who brings her together with Frank (George Clooney), a former recruit himself who has become disillusioned with the promise of Tomorrowland. Both Frank and Athena have long since been exiled from Tomorrowland, which is now desolate and barren when they find a way to sneak back in with Casey. There, Casey learns that the world is on the verge of ending as a result of environmental catastrophe. While Nix (Hugh Laurie), the governor of Tomorrowland, believes that the world is beyond saving, and that humanity has proved it doesn't deserve saving, Casey is certain that there's another way - and Frank comes to believe that she's the key to altering the future.

When it was released last year, one of the major criticisms of Tomorrowland was that it is built on Baby Boomer wistfulness for optimism that they possessed and which is lacking in subsequent generations, who don't grow up dreaming of utopias, but are instead obsessed with apocalypse and dystopia. There is a certain degree of that in Tomorrowland, an attitude of "Hey, kids, stop complaining and do something to make a better future happen," which is fair insofar as we do live in a time obsessed with apocalypse and dystopia,but I ultimately don't think the film is really doing that kind of finger wagging at the world's youth because there's a second part to that sentence, which is, "Don't give up like we did."It's Frank and Nix, after all, who have given up on the world and let the promise of Tomorrowland go to seed. It's Casey who still has hope and wants to put the work into making the world a better place. So, while there is an element of nostalgia for how much more wide-eyed and hopeful people were in the past (and once the film actually gets to Tomorrowland and Nix, it does get a little bit shrill as it makes this argument), I think there's also some acknowledgement that that hope was allowed to become corrupted, helping create a bleaker outlook today.

Much more interesting than this generational contrast is the story's Ayn Randian bent towards arguing that it's only the special few who have real value and that the unremarkable many must be kept away from the work of the special (which they couldn't or wouldn't appreciate anyway), lest it become tainted. For, what is Tomorrowland if not Atlas Shrugged's hidden valley of presumed dead billionaires who have abandoned the world that doesn't properly appreciate their contributions? There's something deeply disturbing about the premise of the story, in which the future belongs only to those deemed "worthy" to enjoy its fruits, while the rest of humanity is screwed and left to suffer, not allowed to share in the advances that would make their lives, and the world at large, better. Tomorrowland and its characters talk a lot about saving the world and getting it off a disaster course, but that's never actually shown to be more than talk. The purpose of Tomorrowland is to segregate the world's best and brightest from the rest of humanity so that they have the freedom to work on their inventions unimpeded, and as far as the film shows those inventions are never actually shared. During the opening stretch of the film, depicting when Frank was a child, Tomorrowland is a place full of technological wonders that, in the decades since, the world has never seen, and at the end of the film Tomorrowland is back to recruiting new people, but the flow of resources only appears to be going one way and it's Tomorrowland itself that's being bolstered and improved, not the world.

All that said, even though the film builds itself up on some questionable thematic ground, it's really not a bad movie. It has some weaknesses, like the fact that it feels like it takes forever to really get going (it's only 130 minutes, which is modest relative to the ever-ballooning average of movie running times, but I still think that 30 minutes could easily have been excised), and the characterization of the relationship between Frank and Athena is... weird - he had a crush on her when he was a kid, only to be heartbroken by the discovery that she's a robot who can't return his affections, and while it's a little bit funny that the now adult Frank can't let it go and can only speak to and about Athena with a heavy dose of passive-aggression, it's also pretty creepy that he continues to be fixated in this particular way over a robot who looks like a pre-teen girl - but the film has strengths as well. Robertson does a fine job holding down the center of the film, and Clooney does well playing the grizzled, disillusioned loner that Frank has become, and the production elements have a certain old school charm that most modern science fiction/adventure movies lack.

Yet, despite its lowkey charms, I find myself at a loss to think of a way that Tomorrowland ever could have been a financial success with such a large budget. It's said that a film has to make three times its production budget worldwide in order to see a profit, which means that at a cost of $190 million, Tomorrowland would have had to have made about $570 worldwide, a ridiculously high bar for it to have to reach. For the sake of perspective, only 121 movies have ever made that much or more worldwide, and of the 11 that crossed that line in 2015 (only 5 of which actually came out during the summer), only 1 was an original property rather than a sequel or an adaptation of a popular novel. So in throwing such a vast sum of money into simply making the film, it almost seems like Tomorrowland was set up for failure because getting to where it would need to go would have meant that it not only had to be a hit, but one of the very biggest hits of the entire year.


Should It Have Been A Blockbuster?: Not under these terms, but if it had had a more reasonable budget and down-to-earth expectations, it probably could have been a minor hit
Posted by Norma Desmond at 8:00 AM

Can a film be both a minor hit AND a box office failure? I think Tomorrowland makes the case that it can. Like you said, $93mil is a decent haul. It's only for n juxtaposition to its astronomical budget that it looks like a paltry sum.

Having seen the movie, I agree with just about everything you say. I also liken it to The Matrix with two who know the truth - Frank and Athena - trying to convince The One of their abilities and have her save the world.

I hadn't thought about the Matrix similarities before. Good point.