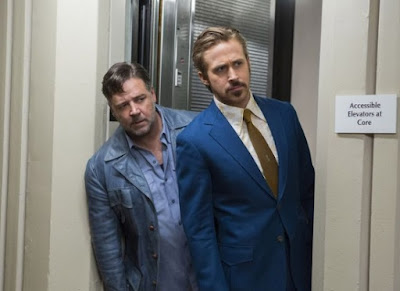 There are moments in The Nice Guys where you watch Ryan Gosling's performance and think, "Is this about to go too far?" The performance is so broadly comedic that it threatens at times to cross the line from being genuinely funny to trying too hard to be funny to actually be funny. Fortunately director (and co-writer) Shane Black is always able to keep him on the right side of that line, reeling him back in whenever it seems like he's about to drift away. The performance is ridiculous, but it's ridiculous in exactly the right way and in what is ultimately a very funny and very good comedy/noir/buddy movie mashup.

It doesn't take much for Healy to scare March off the case, but when two men show up and his own apartment wanting to know where they can find Amelia, Healy realizes that he's gotten in over his head. He now wants to hire March to get back on the case so that they can find Amelia before the other guys do and save her from whatever trouble they're bringing her way - a bit of a tough sell, given that the last time they met, Healy broke March's arm. Nevertheless, Healy's money talks so March agrees to team up and his 13-year-old daughter Holly (Angourie Rice, brilliant in her role, managing to have genuine spark instead of the affected precociousness that many child actors have) comes along for the ride, whether March likes it or not. Mostly he does not, but Holly's persistence is fortunate since more often than not she proves to be a lot more adept at getting information than either her father or Healy, though she also has the advantage of not being drunk all the time. With the clock ticking and assassins closing in on Amelia's trail, Healy and March discover that they've gotten themselves tangled in a complex political web that goes higher than they would have ever suspected.

If you're a fan of Black's 2005 film Kiss Kiss Bang Bang, you'll likely enjoy The Nice Guys, though never quite reaches the same level as that film, nor do Gosling and Crowe, both quite good, reach the levels attained by Robert Downey, Jr. and Val Kilmer in that earlier film. If you're not a fan of Kiss Kiss Bang Bang then... I don't know how to help you. That movie is awesome; go watch it. The Nice Guys has a similar mix of dark (dark) comedy and violence as the other film, though without the metatextual commentary, and it is propelled forward less by the story (though, when you stop to sort it all out, the story itself is kind of dense and a little bit like Chinatown, what with turning on an issue that falls in the intersection between the environment and the economy, and spurred by the complicated, not-what-it-seems relationship between a powerful parent and their child) than by the rapport between the two leads. Crowe and Gosling might not be a comic pairing one might have anticipated working, but they play off of each other brilliantly, Gosling climbing to higher and higher planes of absurdity, Crowe playing the straight man, his bewilderment a perfect reflection of the audience's own.

Almost all of The Nice Guys is played for laughs - even moments when guys are being sent sailing over a hotel balcony several stories up - but one of the reasons that it works as well as it does is that Crowe and Gosling are able to bring a bit of dimension to their characters so that they're more than just a couple of buffoons just trying to keep their heads above water. Healy's a tough guy who doesn't think twice about inflicting terrible pain on others (until, in a key moment, he does think twice), but he's also a deeply lonely person who at one point confides to March about the incident that got him started in the enforcement racket, a moment which made him feel like he was doing something important for once, but which he hasn't been able to recapture since, and there's a genuine feeling of despair and a desire to do something useful in Crowe's performance. March, meanwhile, is a dope, but his dopiness sometimes masks the fact that he actually does (sort of) know what he's doing, and if he's a fuck up, it's at least in part because he's carrying a lot of guilt around on his shoulders. He gives up on things easily, but Gosling is able to convey the idea that he does that because in the moment when it mattered the most, he was unable to come through and protect the people who mattered to him, and he's maybe a little bit depressed because of it. Healy and March are genuine, fleshed out characters first, which makes all the difference. As I said, The Nice Guys isn't quite as good as Kiss Kiss Bang Bang, and if I'm being totally honest the final scene falls pretty flat, but it's still a good, really funny comedy.
Posted by Norma Desmond at 8:00 AM