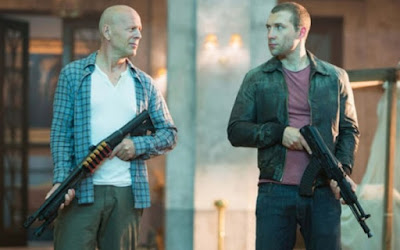 Good lord. A Good Day To Die Hard is a waste of everything except effort, of which none seems to have been expended. This is the kind of movie where it seems entirely plausible that once they came up with the tag line ("Yippie Ki-Yay Mother Russia"), they called it a day and assumed that everything would just work itself out from there. Five films in, John McClane has long since strayed from what he was originally supposed to be and what set him apart as special in the first place - an average guy who finds himself in an extraordinary set of circumstances and finds a way to rise to the occasion - to become something that could only exist in a movie, but A Good Day To Die Hard goes so far beyond ridiculous that it becomes a little insulting.

A Good Day To Die Hard finds John McClane (Bruce Willis) going to Moscow, where his son, Jack (Jai Courtney), has been arrested and has negotiated a lighter sentence for himself by agreeing to testify against Yuri Komarov (Sebastian Koch), a government whistleblower whose former partner in crime, Chagarin (Sergei Kolesnikov), is now a high ranking government official who seeks to silence Komarov for good. Unbeknownst to John, Jack's troubles are all part of his cover as a CIA operative and his crime and arrest part of an elaborate plot to whisk Komarov out of Russia, and when he arrives at the court house and the CIA plan gets underway, he inadvertently screws it up by trying to help Jack. As a result, Jack and Komarov miss their rendez vous and end up fleeing, with John, to a safe house where Jack and his partner, Collins (Cole Hauser), work up a new plan, which Komarov complicates by insisting that he'll only give the CIA what they want if he and his daughter, Irina (Yuliya Snigir), are given safe passage out of Russia.

What happens next is, essentially, a series of betrayals and reversals which find John and Jack, who have been estranged for years, repairing their bond as they battle against an ever-shifting enemy all on their own, the mission having gone so far sideways that Jack has been burned by the CIA. At first the enemy is Chagarin, who has managed to sway Irina to his side in order to trap her father. However, this turns out to be a ruse, as Komarov and Irina are in on it together and double cross Chagarin and his right-hand man... apparently with the approval of the rest of Chagarin's henchmen, who don't so much as blink when Komarov and Irina start issuing the orders. Anyways, it results in John and Jack having to go to Chernobyl to stop Komarov and Irina from making off with a vault full of uranium and blah, blah, blah, gunfire, helicopters, everything blows up, and a heartwarming moment when Jack finally calls John "Dad" instead of "John."

Admittedly, I'm not really all that keen on the Die Hard series to begin with. I've seen the first (which is great), the third (which is fine), and I've seen bits and pieces of the fourth on TV, but never the whole thing in its entirety, so I'm not really the target audience for this movie to begin with. That said, A Good Day To Die Hard doesn't exactly try very hard to win you over, taking the attitude that all it needs to do is show up, have Willis make a few quips, and stage a few action sequences in order to justify its own existence. But, even with the bar set so low, it has a few things working against its success. The first is that the action sequences are generic and unmemorable, which maybe isn't entirely the film's fault, because once a series sends a car flying through the air to take down a helicopter (as Live Free or Die Hard did), there's not really anywhere left to go.

The second is that there's no life to anything that's happening on screen. I'm not sure whether the problem is that Willis is sleepwalking in the role, or that Courtney is so lacking in charisma that he actually cancels out any charisma that Willis brings, or some combination of both, but the film falls down flat on a character level. Back in 2010, before this movie went into production, Willis had stated that he wanted to make at least two more Die Hard movies and then retire the character, but other than the obvious reason (money) I really don't see why a fifth or sixth film in the series were necessary or desired. As a character, it doesn't seem like there's anywhere left for John McClane to go, and as an actor, Willis seems bored playing the role. The only good reason that I can see for a sixth movie is the possibility that it will be better than this one, thus allowing the character and the series to go out on a higher note instead of going out scraping the bottom of the barrel. Yippie Ki-Yay, indeed.
Posted by Norma Desmond at 8:00 AM