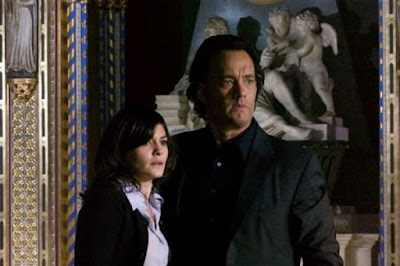 Dan Brown's The Da Vinci Code is one of the most derided novels of the last 15 years, as well as one of the most popular. With respect to both facts, I can understand why. I've never read the novel in it's entirety because after reading the first 10 pages I knew that I'd never be able to finish it, the quality of the writing was so poor, but I can definitely see why the story was embraced. After all, there's a conspiracy theory out there for just about every major historical event and person and it's possible to be entertained by the story even if the actual writing is sub-par. To that end, the film adaptation had something of an advantage because it could tell the story and drop Brown's writing - something that it doesn't really take advantage of, given that the dialogue remains clunky and simplistic - and having Tom Hanks (even with a terrible haircut) couldn't hurt, either. The movie was always going to be a hit; the real question was how well a property already so critically pilloried at the time of its release would hold up over time.


The Story
The Catholic Church. The Knights Templar. A secret kept for nearly 2 millennia, with clues hidden in plain sight in famous works of art. An unassuming American symbologist dragged into (and discovering step-by-step, revelation by revelation) the conspiracy just as it turns into a life or death race towards the "secret." A French girl Friday who knows slightly more than the American, but only enough to help keep them one step ahead of their pursuers at a few critical junctures as they adventure across France and the UK.


The View From 2006
The Good: "Yes, the plot is absurd, but then most movie plots are absurd. That's what we pay to see. What Ron Howard brings to the material is tone and style, and an aura of mystery that is undeniable." - Roger Ebert, Chicago Sun-Times

The Bad: "As the movie gets swallowed up in its own stilted verbosity, I kept thinking that it would work better as one of those audiobooks. Just don't listen to it while driving. You might get drowsy and hit a tree." - Peter Travers, Rolling Stone


The View From 2016
The Da Vinci Code is ridiculous. It was ridiculous then and it's ridiculous now, though it's almost admirable in its commitment, bending itself over backwards, forwards, and side to side in order to make all its connections work, and standing by its assembled puzzle as if it's entirely plausible. Objectively, The Da Vinci Code is... not good. The dialogue is sometimes so basic that it feels as if the movie is talking down to the audience (for example, early on the Tom Hanks protagonist, Robert Langdon, identifies the Vitruvian Man as "The Vitruvian Man, one of Leonardo Da Vinci's most famous works" - when the first part of that sentence is true, the second part is unnecessary), the "twists," such as the identities of the figure known as "The Teacher" and of the living descendant of Jesus Christ and Mary Magdalene, are obvious well before they occur, and many of the things that happen, but particularly the things that happen at the beginning and kick off the whole story, are just stupid.

For example, the story starts with a man being pursued through the Louvre by a goon who eventually kills him. Robert Langdon is brought to the scene, ostensibly to decode the symbols that the dead man wrote using black light ink, but really because the dead man spelled out Langdon's name with the ink. Langdon is then tipped off that he's being set up by a police cryptologist (who happens to be the dead man's granddaughter) and they flee, decoding some other messages the dead man left before he died. This begs a few questions, such as, how is the initial chase/gunning down even happening, anyway? The Louvre and its contents are kind of a big deal, yet there's nary a security guard around anywhere while all this is happening? Moreover, how is it that a man dying of a gunshot wound to the abdomen managed to leave multiple coded messages in different places in the museum - without leaving behind a trail of blood, no less - and arrange himself in such a way that his corpse will serve as a message in and of itself? Why does he have a black light pen at all? Why does he have a black light pen but not a cell phone he could use to call for medical assistance, because I bet that in the time it took him to do all that shit before he died, an ambulance could have gotten there? Why, if Langdon's name was spelled out next to the body, is the investigator playing a game by having him come over and look at the message? Why not just bring him straight in for questioning?

But, of course, if you stopped to ask the obvious questions that come up during virtually every scene of The Da Vinci Code, you'd be doing nothing else. It's best to watch it just accepting it at face value, questioning none of its many questionable elements, and letting it do its thing in the way it's decided to do it. As I've said, the movie isn't good, but it can be (at times, at least) pretty entertaining. I mean, any film which features Ian McKellan in a supporting performance full of impish delight can't help but be at least a little bit entertaining, and director Ron Howard has a firm enough grasp of the language of cinema that, whatever else it is, The Da Vinci Code is certainly never boring. In terms of how the film has held up over the decade, I would actually argue that it probably looks better in 2016 than it did in 2006. In 2006, the hype (and hate) for the novel was still at a high and it probably would have been easier to go into it with preconceived dislike (the film isn't "good," but some of the reviews from 2006 are more vitriolic than necessary for what is ultimately a piece of harmless schlock). Removed from that hype by a decade, it's easier to accept the film on its own terms as a very silly treasure hunt/caper. The Da Vinci Code is not great art, but it's a lot more watchable than its reputation may make it seem.
Posted by Norma Desmond at 8:00 AM